On Monday, Albin Ekdal was hailed at the QX gay gala as this year's hetero for his efforts to counter homophobia in sports. Yesterday, the Sampdoria midfielder spoke in a pre-recorded video message before a seminar in the European Parliament. - What kind of society are we where a young boy can not fulfill his dreams of becoming a football player due to his sexual orientation ?, Ekdal asks in the video. 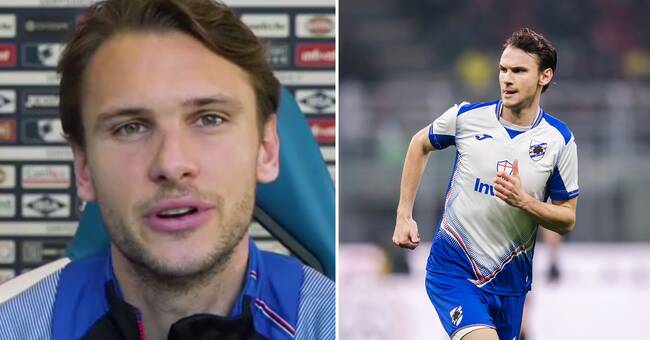 In the interview, Ekdal questioned the small number of openly gay players in men's football and said that the attitude towards homosexuality must change.

Earlier this week, Albin Ekdal was awarded the "hetero of the year" award at the QX gay gala magazine for his work against homophobia in men's football.

- I was a little worried when I recorded this clip because as a heterosexual I asked gay guys to come out.

But of course together we will make it fun for everyone to get out.

It should be pure joy, Ekdal said in a speech of thanks then.

Spoke before the European Parliament

After the prize at the gay gala, yesterday it was time for a speech before a seminar in the European Parliament.

The theme of the seminar was, fittingly enough, homophobia in sports and Ekdal delivered a pre-recorded fire speech to the audience which was also published in several Italian media.

- In an ideal world, no one would feel uncomfortable coming out as gay.

Whether it's in ordinary life or in football.

Unfortunately, the reality is different.

In our sport, only eight players have come out as gay, an extremely small number.

Many would like to come out but do not feel free to do so, Albin Ekdal begins his speech.

In the speech, the Sampdoria midfielder directed strong criticism at the attitudes in football.

- What kind of society are we where a young boy can not fulfill his dreams of becoming a football player because of his sexual orientation.

Every time a youngster hangs up his shoes and stops playing because he is not accepted by the locker room, by the club, or by those around him, it is a loss for the football world, says Ekdal and continues:

- Homosexuality does not define you as a human being, only who you are attracted to.

We are all part of the human race and we have a shared passion, football, Ekdal concludes.