Degerfors shooter king Victor Edvardsen chose to sing the rhyme "hate, hate Örebro" in front of the big heel after the important 2-1 win in Örebro last night. - I had not chosen that rhyme but at the same time it is in the heat of battle and he has a long history with Swedish heel culture, says Degerfors chairman Fredrik Rakar to SVT Sport. 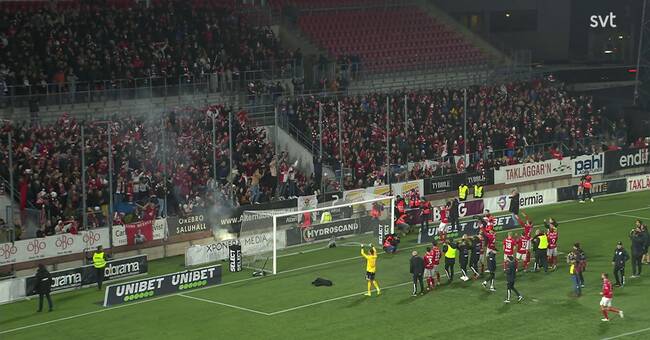 The bitterness arose in a derby in 1993. Until then, it was peaceful between the clubs.

A single match changed everything, which also reflects the rhymes today.

There was a congested atmosphere with 9530 spectators at Behrn Arena.

Degerfors came with the largest away team since Hammarby was there with his heel.

It was insulted and sung to support and mock - from both heels.

The result means that Örebro will most likely leave the Allsvenskan, while Degerfors has the chance to stay.

Every remaining match for Degerfors will be like a final with an Allsvenskan place in the pot.

- It was highlighted in the Football Studio and it is a well-known rhyme and nothing Victor invented as the heel sings everything most often and a lot during the match, says Degerfors chairman Fredrik Rakar.

Now it was not the heel but a player.

What do you say about Edvardsen picking it up?

- He is the player who is closest and most deeply rooted in the heel culture.

I had not chosen that rhyme but at the same time it is in the heat of battle and he has a long history with Swedish heel culture.

Scandal match 1993 behind the rivalry

It was for a long time a pleasant state between the clubs, but a scandalous match in 1993 at Stora Valla changed everything and is the basis for today's rivalry.

Degerfors, which is located in the province of Värmland but belongs to Örebro County, big star Ulf Ottosson suffered double leg fractures after a careless tackle.

Immediately after that, a Degerfors player kicked down an ÖSK player.

Örebro won 1-1 after equalizing in the ninth minute of overtime.

The judge admitted that he had made the worst effort of his life and was threatened with death afterwards.

The situation was so strained that the then governor Sigvard Marjasin went in and mediated between the teams.

Degerfors' current chairman Rakar does not think that the "hate, hate Örebro" rhyme reflects the mood in the stands when Edvardsen was the choir leader with the fans in Vulkanerna.

- At the same time, half an hour, maybe 40 minutes after the match, all sorts of rhymes were sung, of which 99 percent were positive.

I'm a little surprised by the media logic here and that you choose exactly that sequence, the small, small things, Rakar points out.

Tried to get the fans to stop the rhyme

There is a dialogue with the Volcanoes who are independent towards the club.

- We have tried to point it out to the Volcanoes, but we do not control our supporters, and they also sing it at other matches.

It is very deep in many who remember the unfortunate derby in the 1990s.

It has been inflamed between the teams since then.

They broke the leg of Degerfors' perhaps most important player in its modern history and it did not even give a yellow card, explains Rakar who thinks that the club has acted in a reasonable way.

- We have talked to the player who stands for his opinion and we have clarified ours.

Of course, we want to see a more positive grandstand culture, but as a board we do not control this.

We can hope that it will be better next time.

It was a big derby and for some players it was the first time with a large audience.

I see it as a learning and that we need to get better.

If I interpret you correctly, do you think that Edvardsen can do that if he gets a little feeling?

Now I think you attribute to me opinions that I do not have, says Rakar with heat.

Here we move among values ​​and such.

What do you say about that context?

- Of course, but what do you think I should have done?

Ran in and tackled him?

We handle it within the association and what I react to is that of everything that happened that night when Degerfors for a long time played out a ten times as expensive team, Public Service chooses to highlight this sequence in large parts of its broadcast.

The rhyme exists and I do not like it but that does not change the fact that it exists.

Although it should be added to the story.

We have won two derbies and do not have to hate anyone.

Now we will live on our own merits, work forward and work constructively and become a stable all-Swedish club.

Horse at Vulkanerna after the rival victory

The volcanoes' contact person James Wahlberg is hoarse the day after the big victory.

He thinks that the rhyme can be performed - but then towards Örebro or in that context.

- If we look at other leagues in Spain and Italy, they say much worse things to their supporters, but I do not like the rhyme when we, for example, play against Varberg and will not face ÖSK in the next match.

But when we meet ÖSK with the fervor that exists, especially as they have ravaged us, they have called us inbreeding and a little bit of everything else, then I think it's totally okay.

Rakar wants you to let go of the rhyme and move on.

Yes, because you sing that rhyme a little bit everywhere?

- No, it is not us but a small group of our ultras, called URB, who shout that, Wahlberg explains.

What does URB stand for?

Ultra Riossi Bianco, alluding to the red and white Italian.

The main character Edvardsen was elated after singing the rhyme.

- You get into the feeling and it became a bit "hate, hate Örebro", it is for our fans, says Edvardsen.

SVT Sports expert Daniel Nannskog was critical of the rhyme in the Football Studio.

- It is very much adrenaline and they have a history where you are bitter enemies but he would of course have chosen a Degerfors rhyme, a positive rhyme in that situation especially when you have won.

But immediately he began to run a "hate".