Athletes from all over the world praise the ice! The first body "fastest ice" has reached the top level

Short track speed skating World Cup athletes praised the ice surface    the   first body "fastest ice" has reached the top level   The "Meet in Beijing" 2021/2022 ISU Short Track Speed ​​Skating World Cup, one of the Beijing 2022 Winter Olympics test competitions, ended successfully in the Capital Gymnasium. There are 9 sub-events including 500 meters for men and women, 1000 meters for men and 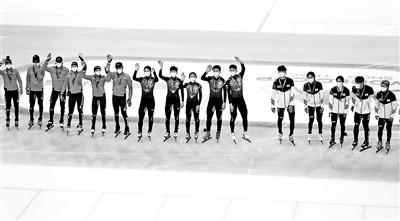 It is understood that in the past 4 days, the operation team of the Capital Gymnasium venue group has closely focused on the attitude of running the event, the speed of response and the temperature of service and concern, and in accordance with the working standards of "first-class venues, first-class standards, first-class services, and first-class performance". We will do our best to organize competitions, venue operations, and service guarantees, and successfully complete various test tasks, and the competition will proceed safely and smoothly as scheduled.

According to Li Wenge, Deputy Director of Logistics of the Capital Gymnasium, in order to ensure the best ice effect, the stadium team actively communicates with foreign ice makers, and the ice making team works together to make overall consideration of ice making, ice pouring, ice filling and emergency response. , Continuously improve the quality of ice surface.

In the 2000-meter mixed relay and the women’s 3000-meter relay, the South Korean team, the Dutch team, and the Chinese team broke the world record five times. Athletes from various countries praised the first ice surface. ISU Event Manager, ISU Short Track Speed ​​Skating Technical Committee The representatives and the technical representatives of the ISU short track speed skating for the Beijing Winter Olympics highly praised the quality of the stadium and ice surface and the service guarantee work of this test competition, and expressed their great expectations for the upcoming 2022 Beijing Winter Olympics.

After the figure skating test on October 16th, the venue quickly entered the transition, and quickly and orderly made the transition to the ice surface, temporary facilities, timing and scoring, image landscape, photography and videography, etc., and completed two high quality on the 17th. In the transition between events, the Capital Gymnasium realized a gorgeous turn from "the most beautiful ice" to "the fastest ice" in one day.

Li Wenge said that the world record was broken five times in one World Cup and two events, which proved that the ice surface as a whole has advanced to the world's top level. Race requirements.