Trusova's tactics, Tarasova and Morozov's style and Chen's program: what the experts discussed after Skate Ameriсa

Alexandra Trusova did the right thing by making her free program much easier and performing only one quadruple jump at the Skate America tournament. Coach Alexander Zhulin believes that this is due solely to the trauma of the athlete, and the choreographer Ilya Averbukh is confident that the victory in Las Vegas will help the Russian woman to gain psychological stability. In turn, Tatyana Tarasova said that she was impressed by the outstanding program of the American Nathan Chen, and Alexander Smirnov praised Evgenia Tarasova and Vladimir Morozov for enriching their creative baggage. 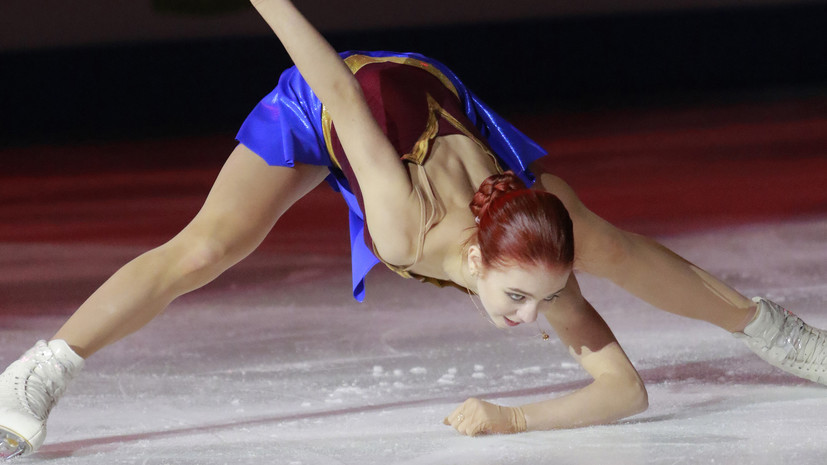 Each start of Russian figure skaters on the eve of the Olympic Games in Beijing arouses great interest among fans and specialists, and the performances of athletes are studied with great care.

The first stage of the Figure Skating Grand Prix, which ended in the USA, was no exception.

For many athletes, it became the first international tournament of the season.

"First in the enemy's lair"

Of course, the main focus was on women's single skating.

The main struggle unfolded between the students of Eteri Tutberidze and the champion of the Youth Olympic Games last year, Yoo Yeon.

The Korean woman has a triple axel in her arsenal.

In the free program, she performed it, but imperfectly, and in the end remained the third, letting Trusova and Usachev go ahead.

However, according to ex-figure skater Katharina Gerboldt, the United States simply did not want the first two places to go to Russian women.

If there was an opportunity, the judges would put the Korean woman higher.

“Today, Yoo Young can try to compete with our girls.

But for us to be afraid of her - rather not than yes, ”- said Herboldt to the portal“ Championship ”.

Honored trainer Tatyana Tarasova also noted the difficulty of performing in the USA, where the judges are not particularly generous with marks for the Russians.

She admitted that she feels proud of the skaters who were able to cope with the pressure put on them.

“First in the enemy's lair.

We are always in the den.

Everyone is in different countries, and we are in a den, ”the specialist said in an interview with RIA Novosti.

Evaluating the performance of Russian athletes, Tarasova spoke positively about Trusova's decision to perform only one quadruple jump in a free program.

Earlier, during the test runs, the bronze medalist of the World Championship demonstrated all five.

However, in Las Vegas, Sasha performed with an injury, and such zeal was simply dangerous to her health.

The specialist emphasized that the Tutberidze team conducted the tournament very competently.

“We won in the class: we removed the triple axel from the short one and four quadruples.

Most likely, Sasha cannot do them yet due to injury.

But she showed a very competent skate with a magnificent quadruple lutz, the program was visible.

They are following an absolutely correct path, ”Zhulin said.

According to choreographer Ilya Averbukh, Trusova had no rivals at the tournament.

She could only lose to herself, but this did not happen.

“Sasha has a serious margin of safety.

She performed with an injury, showed a fighting character.

This victory is good for psychological stability.

There is a big season ahead.

At a press conference, Trusova admitted that she actually planned to perform three quads, but there was not enough training before the start.

Even with one quads, she skated for the first time since the injury.

At the same time, the athlete noted that she was progressing.

“I have changed - both internally and externally.

I got acquainted with different coaching approaches, gained a lot of experience.

I think I'm getting stronger every season, ”Alexandra admitted.

Not such enthusiastic opinions about Trusova's skating are heard from America.

According to Canadian journalist Beverly Smith, Japanese Satoko Miyahara, who finished seventh at the last World Championship, looks much stronger than Sasha, who won a bronze medal at that tournament.

"The Case Behind the Complexity"

The experts spoke much more restrainedly about the performance of the other two Russians at Skate America.

According to Averbukh, Usacheva lacks top elements to fight the leaders of women's single skating.

“What is already in the arsenal, it does efficiently and consistently.

In this regard, Dasha is a great fellow.

As soon as she starts demonstrating jumps of a higher level, we can talk about her as a contender for a medal, ”added the choreographer.

Tarasova, commenting on Usacheva's performance, advised not to rush to conclusions about the complexity of the program: after all, it is still just the beginning of the season.

“It's October now, it's too early to draw any conclusions about what will happen to her next.

Usacheva skated with mistakes, but this did not prevent her from staying in her place, ”said the specialist.

As the 15-year-old athlete admitted, Skate America was more difficult for her than previous tournaments, because it became the first international start at an adult level.

"I am a little upset by the mistakes I made in the free skating, but I am satisfied with my result," the press service of the International Skating Union quotes Usacheva as saying.

The judge showed rather modest assessments to the third representative of Russia - Ksenia Sinitsyna.

For her, as well as for Usacheva, the performance at Skate America was an international debut.

The skater skated both programs cleanly, but remained only on the fifth line.

“What happened to Ksenia Sinitsyna happened.

She did not fall, she did everything, but she skated like a child and completely without speed.

The athlete herself was pleased with the performance and promised to complicate the content at the next tournaments by adding a quadruple jump.

"Tarasova and Morozov have a style"

The Grand Prix stage in Las Vegas was special for Eteri Tutberidze.

This time the coach took not only single girls out onto the ice, but also a sports pair of Evgeny Tarasov / Vladimir Morozov.

The guys did not perform without mistakes, but they confidently won the tournament.

After the award, the coach posted a photo on Instagram with the caption “Skate America 2021 - Gold.

We continue to work. "

At the same time, not all experts consider the victory of Tarasova and Morozov to be the merit of the Khrustalny team.

Alexander Smirnov, multiple winner of the world championships in pair skating, noted that the pair formed their style much earlier - during the period of work in America.

“Tarasova and Morozov already have their own faces.

I associate these changes not even with Tutberidze's headquarters, but with the period of training in America.

Working with the dancers has given a lot, they have strengthened their creative luggage, added in skating, small intricacies of figure skating, use small dance techniques.

We got rich, began to perform much brighter, more beautiful.

Perhaps they lack the audacity in new programs.

But specifically in these performances they do not need it, ”Smirnov said.

However, not all Russian athletes have done well in the United States.

The skater was supported by the Olympic medalist Evgeny Medvedev, noting the character of the young man.

“The free program was much cleaner than the short one.

One gross mistake - falling from a quadruple salchow, slightly less gross - from a triple axel, step-out.

The most important thing is that he continued to skate and fight, ”Medvedeva said on the First Channel.

Danielyan's debut at the international adult level took place in a star company.

As Tatyana Tarasova admitted, she especially liked the program of the bronze medalist of the Olympic Games in Pyeongchang.

“Chen lost for the first time in a long time, but he has an outstanding program! My opinion is the best! This is an extraordinary penetration into the music of Mozart, a deep immersion in it. If Nathan jumps Lutz and Salchow, which he did not do in the US, things will be different. Zhou is great! But Chen ... I couldn't sleep all night. What a program he is skating! I was impressed, ”Tarasova admitted.

The Canadian Grand Prix, which will be held from October 29 to October 31, is no less striking in its composition.

Good news came on Monday - Russian athletes will perform on it in full force.

Kamila Valieva, Elizaveta Tuktamysheva and Alena Kostornaya will go to the tournament.

Makar Ignatov, Alexander Samarin, Evgeny Semenenko will compete in the men's competition, and Daria Pavlyuchenko and Denis Khodykin will perform in pairs.