Real Madrid beat Barcelona in el clásico in the tenth round of the Spanish Football Championship. Madrid deliberately gave up the initiative to the opponent and scored twice in quick counterattacks. In the first half, the score was opened by David Alaba, and in the added time by the referee, Lucas Vasquez put an end to the confrontation. The Catalans only managed to score a prestige goal by Sergio Aguero. At the same time, they practically did not penetrate into someone else's penalty area and rarely inflicted dangerous shots on the goal of Thibault Courtois. 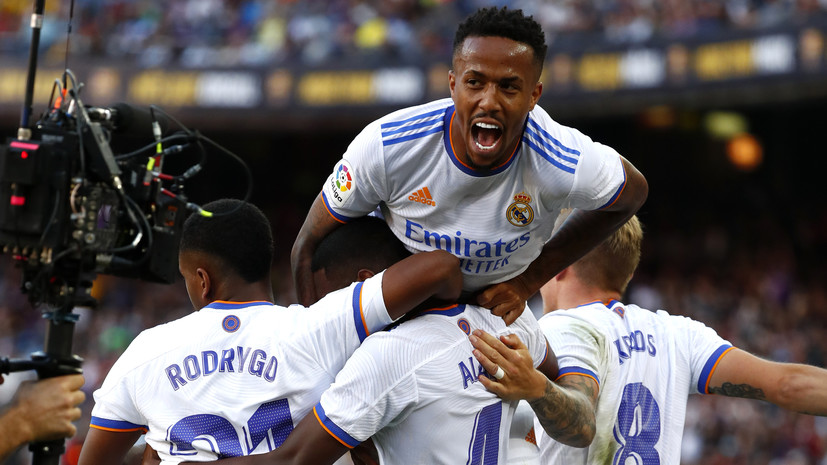 For the first time in a long time, Real have approached El Clasico as the clear favorite.

Madrid had a great start to the season, although they somewhat spoiled the impression of their own performance with a draw with Villarreal and a sensational defeat at Espanyol.

This is facilitated by the magnificent form of Karim Benzema, who scored nine goals in eight games of Example.

Barcelona is frankly in a fever.

She regularly loses points in the national championship, and in the Champions League completely lost to Bayern and Benfica.

The Catalans are still unable to recover from the departure of Lionel Messi, and Ronald Koeman is unable to cope with the situation.

A loss in the derby could only push him to retire.

At the same time, the team approached the most important confrontation with serious losses.

In the absence of forwards, Kuman, as expected, released Ansu Fati on the edge.

In the support zone, along with Sergio Busquets, another young footballer is located - Gavi.

Gerard Piquet and Eric Garcia were a couple in the center of defense.

Only long-injured Gareth Bale and who is the main performer Luka Jovich could not take part in the meeting.

That is why the composition of “Real” turned out to be quite predictable.

The only thing: the place of Eduardo Kamavinga on the right edge of the attack was taken by Rodrigo.

From the first minutes, the hosts, as expected, took the ball under their control.

They owned the initiative and tried to find problem areas in the opponent's defense.

The Catalans were especially active on the left flank, where Jordi Alba and Memphis Depay played.

However, in general, Madrid defended calmly and did not allow opponents to penetrate their own penalty area.

But to go on the attack from "Real" turned out worse.

Barcelona immediately put pressure on when they lost, and in most cases they did it successfully.

As a result, the team's counterattacks in the first 20 minutes did not pass at all, and Benzema was bored in the other side of the field.

All this led to the fact that for a long time not a single team could create dangerous moments.

However, gradually the counterplay of Ancelotti's charges improved.

They, too, often went forward on the left flank, where Vinicius confronted Oscar Minges.

One of their "duels" almost ended with a penalty kick.

The Brazilian fell down with pleasure after touching a defender in the penalty area, but referee Jose Sanchez Martinez did not show the point.

The Latin American tried to calm down Alba who came running, thereby almost provoking a scuffle.

And soon the audience witnessed the first missed chance.

Sergino Dest, after the transfer of Depay and Fati's discount, hit almost point-blank from the penalty area, but managed to send the projectile above the crossbar.

The team's quick attack tactics worked completely for this episode.

Depay made a loss near someone else's penalty, and the Madrid team immediately ran ahead.

The main character was David Alaba, who made the selection himself and joined the attack.

Rodrigo rewarded the center-back with a pass, and he shot perfectly into the far corner.

Barcelona almost bounced back after a couple of minutes.

After the corner kick, Gerard Piquet was left all alone and struck his head into the far corner, but miraculously missed the target.

There were no more dangerous moments before the break.

Surprisingly, Alaba's shot was the only one on target in the first half of the meeting.

Koeman was clearly dissatisfied with what he saw in the attack, and during the break, Philippe Coutinho strengthened it. The Brazilian replaced Mingesa, while Dest dropped into defense. However, the appearance of a creative footballer in position under the striker did not help much. The blue garnet still owned the ball a lot, but did not penetrate into someone else's penalty area. The opponent defended reliably and compactly, leaving almost no space between the lines. Toni Kroos, Luka Modric and Casemiro looked great in the support zone.

Real Madrid's counterattacks turned out to be much more dangerous.

One Benzema missed a couple of chances to excel.

After a discount from Modric, he struck at close range in Marc-André ter Stegen, and then miraculously failed to close Ferlan Mendy's cross.

The Catalans did not have such a chance.

I remember only that Desta's shot above the gate and an inaccurate header in the performance of the substitute Sergio Aguero.

Thibaut Courtois had practically no work.

To rectify the situation, Koeman threw the already mentioned Aguero into battle, and a little later - the tall powerful Luc de Jong.

But that didn't help either.

And in the 93rd minute, Madrid finally removed all questions about the winner.

Fresh Marco Asensio dragged the ball into someone else's penalty area and shot.

Ter Stegen saved his team, but could do nothing about finishing off Vasquez.

Only then did the Catalans finally manage to excel.

Aguero, after the Desta lumbago, hit the target and scored his debut goal for Barcelona.

But the hosts did not have time for a comeback.

It is symptomatic that the Argentine's kick eventually became for the team only the second, which came on target.

Thus, the blue garnet not only suffered a second defeat in the last three matches of Examples, but also lost the fourth classic in a row.

In the passive, Kuman has three misfires in the derby.

Ancelotti, on the other hand, won for the first time in his career at the Camp Nou in Examples.