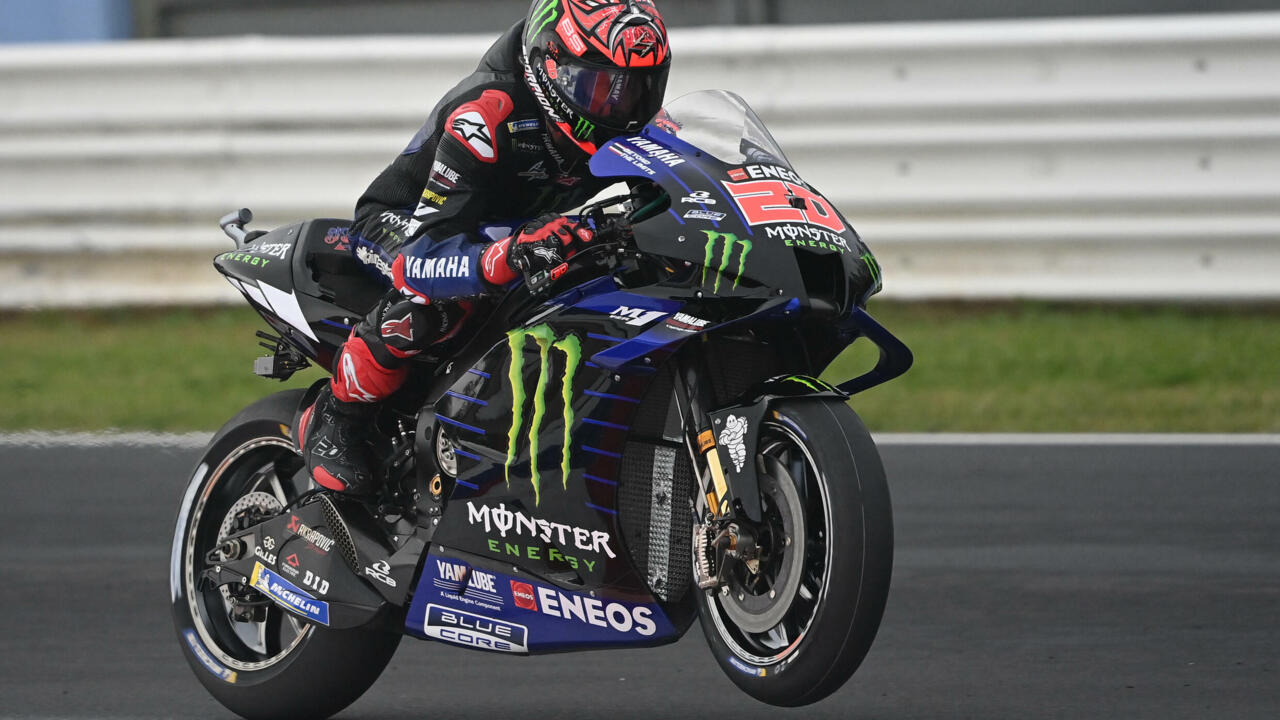 The French MotoGP rider Fabio Quartararo on his Yamaha motorcycle during qualifying for the GP of Emilia-Romagna, at the Simoncelli circuit in Misano (Italy) on October 23, 2021 ANDREAS SOLARO AFP

Fifteenth on the starting grid of the Grand Prix of Emilia-Romagna in Misano (Italy), Quartararo made an impressive comeback to 4th place.

Above all, he took advantage of the fall of his last rival for the title, the Italian Francesco "Pecco" Bagnaia (Ducati), who was at fault four laps from the finish when he was in the lead.

With now 65 steps ahead of Bagnaia, “El Diablo” (the nickname acquired during his youth races in Spain) can no longer be reached in the drivers' standings, before the last two rounds of the season (Algarve on November 7 and Valence on the 14th), each time winning 25 points.

Even before returning to the paddock and after celebrating his title with the spectators in a cloud of blue smoke, Quartararo received a golden helmet, symbol of his world title.

He then joined the pits where all his rivals, including Spaniard Marc Marquez, winner of the race on Sunday, and his hapless rival Bagnaia warmly congratulated him.

I can't believe it, I find it hard to speak, it's crazy, it's a great time to savor,

" he explained, on the verge of tears.

This consecration comes during his third season in MotoGP, the first with the Yamaha factory team, after two years with the Yamaha-SRT satellite team.

Out of 16 GP contested in 2021, Quartararo won ten podiums, including five victories, and five pole positions.

Before winning in 2020 the first French victory in the category since that of Régis Laconi in Valence in 1999.

In the race for the title in the absence of the Spanish favorite Marc Marquez (Honda), injured, the N.20 however let slip the title at the end of the season, victim of his annoyance in front of a motorcycle not up to his expectations.

In 2021, Quartararo drew the lessons, with the less good result a 13th place in Spain in early May, when he was handicapped by compartment syndrome (muscle problem) in one arm.

During the following round, in France, he took over the reins of the championship not to let go, despite the final assaults of Bagnaia.

This Grand Prix was also the last of the Italian icon Valentino Rossi (Yamaha-SRT) in front of its public, before retiring at the end of the year.

His disappointing 10th place, like a last complicated season, did not prevent his countless fans from paying homage to him in a cloud of yellow smoke (his favorite color).

The pilots of his team (the VR46) raced in suits and on yellow motorcycles crossed out with the words "Grazie Vale!"

(Thanks Vale in Italian).

Next year, “Vale” will devote himself to his family (he is expecting his first child), to his academy training Italian pilots, to his future MotoGP team and to motor racing, with the goal of one day participating in the 24 Hours of Le Mans.