No mercy: how Zenit scored seven goals and inflicted on Spartak the biggest defeat in RPL history

Zenit defeated Spartak in the 12th round of the Russian Premier League (RPL). In the derby of the two capitals, Sergei Semak's wards won with a score of 7: 1 and inflicted the biggest defeat on the Muscovites in their history. Serdar Azmun and Andrei Mostovoy scored a double at their own expense, and Artyom Dzyuba, who came on as a substitute, converted a penalty and repeated Oleg Veretennikov's record in goals in the history of the Russian championships. 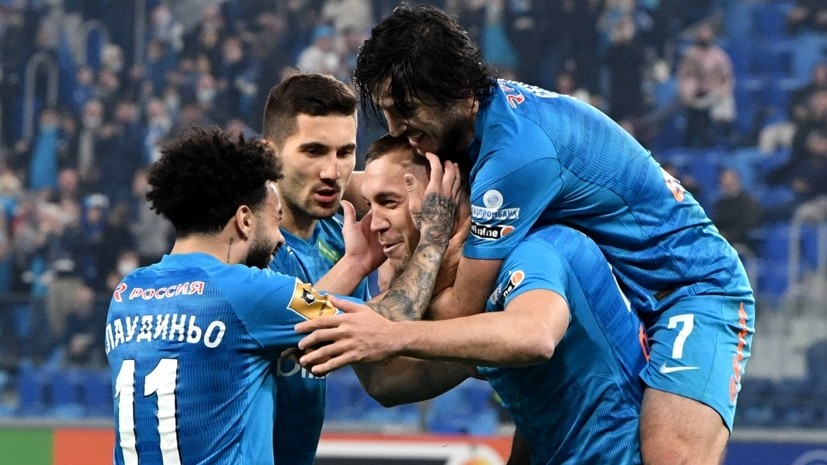 According to advanced statistics, teams with some of the best attacking and defensive lines in the championship met in the central match of the RPL round 12. But if the fact that Zenit's attack is among the strongest in the country has long been beyond doubt, then many would hardly dare to apply such epithets to the defense of Spartak. Although, Ruy Vitoria's charges were in first place by a wide margin in terms of expected conceded goals (6.4). The closest pursuer was Dynamo, whose xGA was 9.81.

Of course, such an anomaly was explained quite simply. Despite the fact that the teams have already played most of the first round, Spartak's calendar has been quite comfortable so far. And it was with the match against Zenit that a series of games began, following which the red-and-white performance could well have become less attractive. In addition to Rostov and Ufa, they had meetings with Lokomotiv and Krasnodar - direct competitors for getting into the European Cup zone. In this regard, following the results of the trip to St. Petersburg, Vitoria's wards could either get a boost of confidence, or a blow to psychology that could unsettle them and even provoke the resignation of the head coach.

And on the eve of the derby of the two capitals, almost all factors spoke in favor of Zenit. Firstly, the unbeaten run of Petersburgers in the face-to-face confrontation consisted of seven matches and lasted almost four years. Secondly, one of the cornerstones of Spartak's defense, Samuel Gigot, could not enter the Gazprom Arena field. In a meeting with Dynamo, the Frenchman received his fourth yellow card in the current championship and was disqualified. In this regard, the defensive line of the guests acquired an extremely unusual look. The trio together with Georgy Djikia were Maximiliano Kofrie and Nikolay Rasskazov, who just a few days ago failed the meeting with Leicester in the Europa League. Also in the start there was no place for Zelimkhan Bakaev, who was replaced by Quincy Promes, who recovered from an injury.

In turn, "Zenith" also did not go without losses. Daler Kuzyaev missed the derby due to the bust of yellow cards, and Malcolm - because of the damage received in the confrontation with Juventus in the Europa League. Until the last moment, the participation of Claudinho remained in question, but the Brazilian rookie managed to recover. However, the most unexpected thing was the absence of Artyom Dziuba at the start. Sergei Semak decided to play 3-4-3 and thus not only mirror the opponent's formation, but also give mobility to the attack. In this regard, the best scorer in RPL history remained on the bench.

And already in the first minutes it became clear that the decision was correct. The high-speed attacking trio represented by Serdar Azmun, Claudinho and Andrey Mostovoy, with the support of Yaroslav Rakitsky, who performed one accurate throw after another, immediately began to create colossal problems for the guests' defense. The emphasis, as expected, was focused on the problem area on the right semi-flank, for which Rasskazov was in charge. Already by the sixth minute, Zenit made breakthroughs through it three times, but subsequently either there was not enough accuracy, or the forwards made jerks too early, finding themselves in an offside position.

Already in the tenth minute, the Petersburgers created the first 100% chance at the gates of Alexander Maksimenko. Wendel found Claudinho with an accurate diagonal pass into the penalty area, but the Olympic champion in Tokyo was unable to strike outright. The Brazilian did not hesitate and rolled the ball to Azmun, and when his “shot” was blocked, he still shot it himself. It seemed that a goal was inevitable, but Jikia, who was on target, miraculously saved Spartak.

Having experienced a surge in the hosts' activity, the guests tried to take the game away from their goal a little, and it even partially succeeded. The problem is that it was not possible to create something serious ahead. Petersburgers quickly and in a timely manner pushed back, and the positional attacks of Vitoria's charges clearly lacked thought: the slow rolls from one flank to the other did not allow the enemy to be taken by surprise, and long-range strikes did not carry danger. Even the fact that already in the 13th minute Douglas Santos was forced to leave the field did not help Spartak. The Brazilian was injured and was replaced by Daniil Krugovoy.

The key period was from the 21st to the 28th minute, during which Spartak's defense began to fail one after another. During this period, the red and white conceded twice, with both goals coming from the same right flank. True, this time not only Rasskazov deserved criticism, but also Victor Moses. In the episode with the first ball, the teammates did not figure out which of them should be nominated for Rakitskiy, who served in the penalty area. As a result, the canopy went to the far post, and Azmun jumped out great and struck his head irresistibly. And in the moment with the second, the Nigerian himself did not take care of Claudinho too tightly and gave him a phenomenal blow in the nine.

The ten-time champion of Russia responded with a good attack, culminating in a blow by Ruslan Litvinov. But this episode could not give impetus to the guests' game. Already in the 36th minute, Rakitskiy skillfully performed a corner and helped Azmun to issue a double and catch up with Wagner Love in goals in the RPL, and in stoppage time the hosts brought the score to indecent. "Spartak" almost in full force rushed forward and missed a crushing counterattack. Mostovoy responded to a long throw by Vilmar Barrios, with the help of a simple feint he removed Jikia and found an empty net in front of him. Maksimenko moved forward by mistake and could no longer prevent him from increasing the handicap - 4: 0.

As a result, the second half turned into a mere formality, although Vitoria tried to shake up his players. Instead of Larsson and Zobnin, Mikhail Ignatov and Jorrit Hendrix entered the field, respectively, and at first this had a positive effect on Spartak's game. He even closed the gap with Promes' efforts, but Zenit restored the status quo just two minutes later. This time Rasskazov missed Mostovoy's jerk and could not prevent that from taking a double.

Until now, Spartak has never allowed Zenit to score more than five goals in official matches.

Therefore, the exact blow of Artyom Dziuba, who left the bench, became historical for two reasons at once.

The realized penalty not only helped him to score the 143rd goal and repeat Oleg Veretennikov's record for goals in the Russian championships, but also inflicted the biggest defeat on his former team in a face-to-face confrontation.

But the torment of Muscovites did not end there.

Left without a deleted one for Kofrie's second yellow card, they missed again.

Two minutes before the end of normal time, Alexander Erokhin also justified the confidence of the coach and sent the seventh goal into the goal of his principal opponent.

Spartak lost to Zenit 1: 7 and suffered the biggest defeat in their history.