His Highness Sheikh Mansour bin Mohammed bin Rashid Al Maktoum, Chairman of the Dubai Sports Council, affirmed that the UAE has proven, with practical evidence, that it is capable of receiving the world, and that it is the ideal place to host and organize major international events in various fields, including sports events. 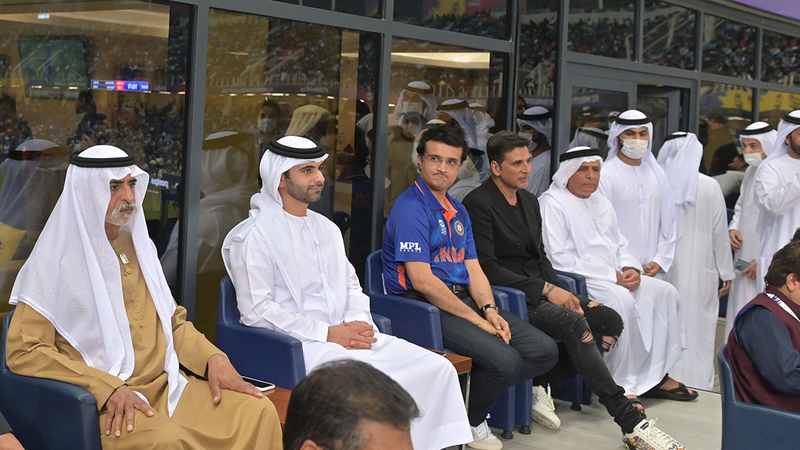 Within the World Cup competitions

His Highness Sheikh Mansour bin Mohammed bin Rashid Al Maktoum, Chairman of the Dubai Sports Council, stressed that the UAE has proven, with practical evidence, that it is capable of receiving the world, and that it is the ideal place to host and organize major international events in various fields, including sports events, based on the vision of the rational leadership. Which stands behind an integrated work system, characterized by flexibility and ability to keep pace with changes, while placing human safety and happiness at the forefront of priorities, and mobilizing for this goal all the ingredients that ensure its achievement in accordance with the best international standards, and at various times, in addition to the UAE’s long history and achievements in hosting Organizing major events.

His Highness said: "The UAE has well-deservedly proven its ability to host the world, and we follow daily tens of thousands of visitors flock to (Expo 2020 Dubai), the largest event of its kind in the world, and today we witness together a unique sporting event, awaited by hundreds of millions of fans of this sport. Around the world, it is being held on Dubai stadiums, with a large audience, which encourages us to move forward in the development process, according to a vision that aims to reach the first place in various fields of giving, and within various fields, including the sports field.”

His Highness, Chairman of the Dubai Sports Council, also expressed that every resident and visitor to the country feels that he is in his homeland, and that he finds the event he is looking for, as all events and sports gather in one place, including the Cricket World Cup, which is being held for the first time in the UAE, and on Dubai Sports City stadiums, after the great success achieved by the country hosting the matches of the Indian Professional League Cricket for two consecutive seasons.

The match was attended by Khalid Al Zarooni, Chairman of Dubai Sports City Board of Directors, Chairman of the Cricket Supervision Board Sourav Ganguly, Secretary General of the Board Jay Shah, Chairman of the Board of Directors of the Pakistan Cricket Board Ramiz Raja, Ambassador of the Islamic Republic of Pakistan to the UAE Afzal Mahmood Mirza Sultan Mahmoud, and the Ambassador of the Republic of India to the UAE State Pavan Kapoor, and CEO of the International Cricket Council Jeff Allardyce.

More than 20,000 spectators in the stadium, and more than a billion followers on television, enjoyed the match, which lasted for more than three hours, filled with the strongest competitions, especially as it is the first between India and Pakistan in more than two years, as it was their last confrontation in the World Cup. The 2019 World Cricket match was held in England, and the match represents the summit of competition in cricket, due to the great popularity of this sport in the two countries, which contributed to making it the most exciting match and followed globally, as it is watched by more than one billion people around the world, and the confrontations of India and Pakistan It is followed by more than 90% of cricket fans in the world.

Dubai will host 13 matches in the Cricket World Cup currently being held in the country, including the final match scheduled to be held on the 14th of next November.

It is worth noting that, in addition to the large Indian and Pakistani communities in the UAE, large numbers of cricket fans have flocked to the country from all over the world, to follow the World Cup competitions in general, and to watch the India-Pakistan match in particular.

Chairman of the Dubai Sports Council:

• «The UAE has proven its ability to receive the world and that it is the perfect place to host and organize major international events».

• The competitions of India and Pakistan are watched by more than 90% of cricket fans in the world.

• Dubai will host 13 matches in the Cricket World Cup, including the final match scheduled for November 14.

• 20 thousand spectators watched the match in the stadium, and more than a billion viewers of the game fans on satellite channels.