Injury is not a hindrance: Trusova won the short program at the US Grand Prix

Alexandra Trusova won the short program at the first Grand Prix of the season in Las Vegas. She did not try to perform the triple axel, but broke her personal best, gaining 77.69 points. At the same time, before the tournament, there was a possibility that the student Eteri Tutberidze would withdraw due to injury. The second and third places were also taken by Russian figure skaters Daria Usacheva and Ksenia Sinitsyna. 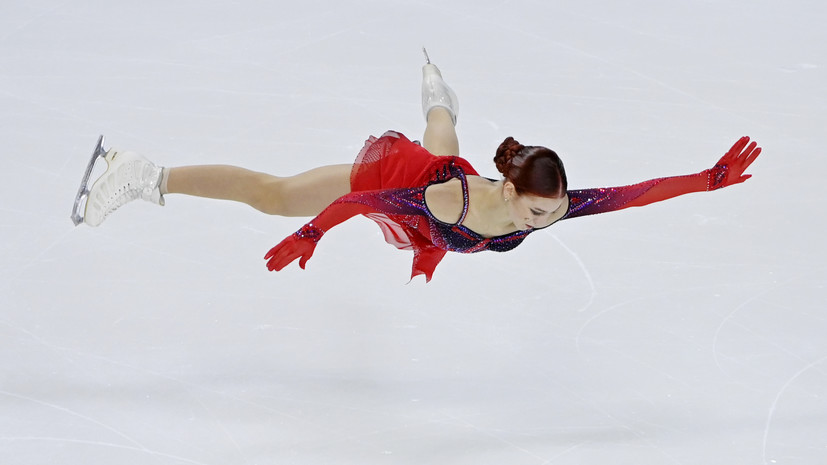 The season in figure skating is gaining momentum, and the status of the competition is gradually increasing.

The “B” category warm-up tournaments and domestic competitions have finally been replaced by the Grand Prix series.

The first stage of Skate America is taking place these days in Las Vegas, and at it the Russian fans have a special focus on the girls' performances.

True, the singles tournament at the last moment almost lost its main star. Alexandra Trusova arrived in the USA with a leg injury, which she herself did not hide. On the sidelines, there was talk that the bronze medalist of the World Championship would withdraw from the stage or seriously simplify its programs, but neither one nor the other happened. Trusova remained on the list of participants, and in the preliminary application she included both a triple axel in a short rental and five quadruple jumps in an arbitrary.

By the time Trusova went out on the ice, all the other skaters had already managed to show what they were capable of. The leadership was seized by Daria Usacheva, for whom it was the first competition of the season and the debut at the adult Grand Prix series. In the group of Eteri Tutberidze, only she does not have super-complex elements in her arsenal, but at the same time she is quite able to do without them. The judges sometimes rated her technical elements as fives, including a triple lutz and a cascade flip-toe loop, and sometimes even gave her 9.5 points for components. Usacheva received 76.71 points - so she immediately ended up in the top ten figure skaters in personal records in the short program.

And the second after the 15-year-old figure skater was Ksenia Sinitsyna.

Once she was a promising junior, together with Trusova and Anna Shcherbakova represented Russia at the world championship and was the silver medalist of the youth Olympics.

But the adult career of the student of Svetlana Panova did not work out, and only now the 17-year-old athlete has grown to the Grand Prix.

And the debut turned out to be quite good - outwardly, her rental was as clean as that of Usacheva.

However, in relation to Sinitsyna, the referees were not as generous and gave her 71.51 points.

The only real rival of the Russian debutantes and the awaiting Trusova was the Korean Yoo Yeon, who entered the short program with a triple axel.

But he never became her trump card.

The 17-year-old figure skater finished the jump and could not stand on her feet, barely managing to score more than 70 points after that.

Perhaps, having seen this failure, Trusova nevertheless decided not to repeat the element and once again postponed it until better times.

She started her program in the form of Frida Kahlo again with a double axel.

A well-executed jump clearly gave her confidence, which she lacked due to worries about injury, and further Trusova was already walking along the knurled one.

A triple flip and a cascade of lutz - toe loop in the second half allowed her to be almost on a par with Usacheva in technical assessment, and her authority and past achievements gave her already a tangible advantage in components.

Trusova received 77.69 points and even broke her personal best for short programs.

After the skate, Trusova told how the decision was made to go on the ice, and at the same time touched on the topic of vaccination for participation in the Olympic Games.

She stated that she is ready to undergo the necessary procedure for this, although she is not yet 18 years old.

“In general, I am satisfied with my performance. I'm glad that I skated cleanly, but upset that I didn't do the triple axel. Both programs are very suitable for me. I have a lot in common with Frida, she went ahead no matter what, continued to be creative. My rental is more important to me than grades. But today I am satisfied with the grades as well. Of course, I had two options - to shoot or skate. But in the morning I woke up and realized that my leg no longer hurt so much. So you can roll it. If necessary, then, of course, everyone will be vaccinated. But in our case, you need to get to the Olympics first, ”Trusova told Sport24.

On the night from Sunday to Monday, the girls will present their free programs.

The bronze medalist of the world championships did not say in advance how many she still plans to perform quadruple jumps, but with any number of them she will have excellent chances to win the final victory.