Hammarby celebrated the victory in the 93rd: "Crazy match"

Hammarby was down 3-2 at home against the last Östersund after only 24 minutes. But in the end it was three points for Bajen. Akinkunmi Amoo became match hero after thundering in a penalty in stoppage time to 4-3. 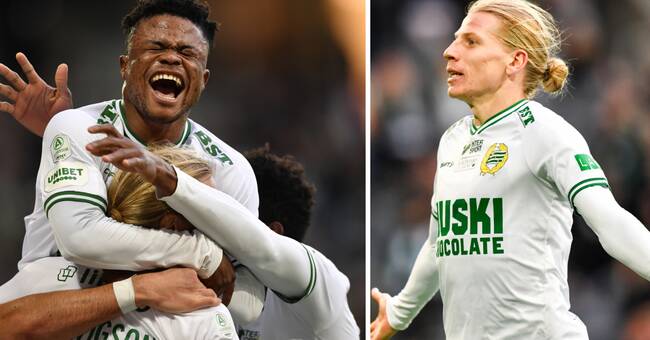 Hammarby turned a disadvantage into a victory in the last quarter against the last Östersund.

The victory kicked Akinkunmi Amoo in from the penalty spot in the 93rd minute of the match.

The victory was far in but it was three points after the 4-3 victory.

- It was a very good result from us.

We never gave up.

I am very very happy and very proud, says Akinkunmi Amoo to discovery +.

The most goal-scoring half

Five hits in the first half also meant the most goals this season.

Jumbon Östersund stepped out in the locker room with a 3-2 lead at half time against a Hammarby who still dominated in the end against goal.

Östersund's Blair Turgott pulled home with a shot from distance that Hammarby's Danish goalkeeper intended to pick up in his arms.

But instead it went between his hands and it was 2-0 for the away team.

Hammarby got a ticket into the match through an own goal to 2-1.

And after only 24 minutes played, it was 2-3 on the scoreboard since Williot Swedberg gave Hammarby hope again.

Acknowledged in the end

There was a goal in the air for a long time and with 20 minutes left to play, Arijan Bojanic got the chance for a penalty but he scored the crossbar.

Instead, the equalizer with a quarter came when Gustav Ludwigson placed the ball from close range.

His ninth of the season.

The minute before, Östersund's Sam Mensiro received a red card.

In the 93rd minute of the match, as I said, Hammarby still wrote home three points after 19-year-old Amoos' safe penalty.

At the end of the first, Hammarby's Astrit Selmani was forced to leave the field on a stretcher after colliding with an opponent.

Hammarby announces via his Twitter that it is a feared concussion and that he lost consciousness for a few seconds.

Astrit is now being taken to hospital for further examination.

More info when we know more ", the club wrote shortly after the event.