The resolution of the MotoGP World Championship was hidden where few expected yet, in the Misano circuit, land of motorcycling. There where Valentino Rossi said goodbye to ... 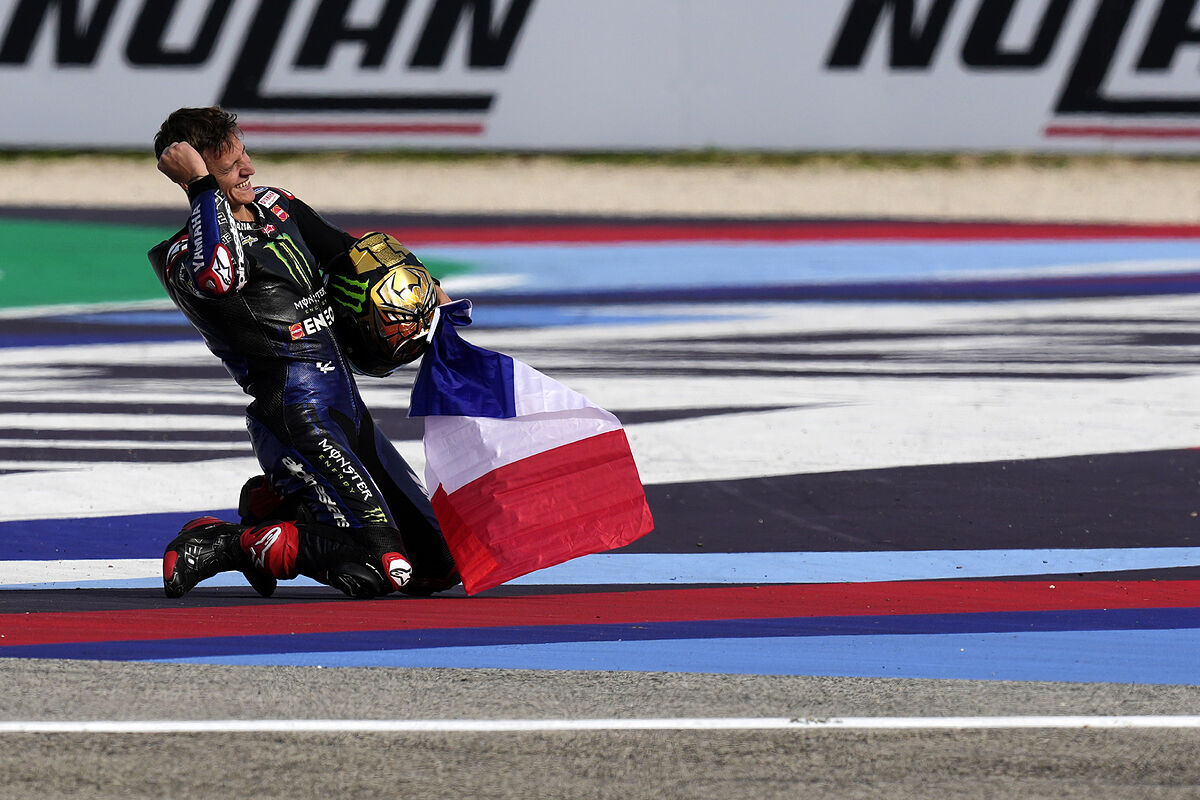 The resolution of the MotoGP World Championship was hidden where few expected yet, in the Misano circuit, land of motorcycling.

said goodbye to racing in Italy forever, there where

won again on a right-hand circuit, the king was a French devil.

It was unexpected because, despite the clear advantage of the Frenchman, everything was in favor for

postpone the party, to spice up what was left of the World Cup.

He started from pole, with an evident superiority and in the absence of five laps he was leading the race with less pressure than Márquez might seem - "he had already thrown in the towel", confessed the Spaniard-, which at that time was beginning to take off the rhythm of the Italian Ducati.

But champions are also champions because luck accompanies them.

Or because they know how to stay calm in moments of maximum tension.

In that abyss, Bagnaia made a fatal mistake.

He went to the ground in exactly the same turn, the 15, in which his teammate

had gone at the beginning of the test

And there all the accounts ended.

Quartararo was a world champion.

And Marc Márquez had the red carpet for another personal milestone.

He will remember this October the ilerdense, as the beginning of the end of his particular ordeal, as the last barrier demolished after his terrible humerus fracture.

It was his second consecutive victory, the third of the season, but more importantly, it was the first time he had won on a track in a clockwise direction.

behind, it was Repsol Honda's first double since Aragón 2017.

"To the right, I still know. This shows progress and is special, it will give me a lot of confidence. I don't even know how I was able to keep up with Pecco. He was the fastest on the track," confessed a Máquez who he added his 59th MotoGP victory.

But the protagonist had a French accent and was dressed in blue. Aware of his advantage, that nerves could be a worse enemy than his rivals, Quartararo took it easy. He did not risk at the start, where he even lost some position and got down to work with his comeback. In 10 laps he was already seventh.

was the next to fall and then

. The podium, for which

Everything pointed to Portugal.

Because up front is where the pressure was.

Bagnaia signed a great start, in which he soon distanced himself.

He was shielded by his teammate Jack Miller, in a perfect tactical approach.

And only Marc Márquez - also a great start - could keep up with the Ducati.

But the idyllic script soon changed with Miller's crash at Turn 15, left.

Then the race at Misano became a heads up between Márquez and Bagnaia.

The Spaniard was pressing, finally agile and loose on a left-wing circuit, where his shoulder physically suffers the most.

And everything exploded into the air almost at the end.

The joy of Quartararo - who fought until the end to even get on the podium, was prevented by a brave

-, the joy of Marc Márquez and also the nostalgia of the yellow stands for Rossi's goodbye with his tenth place.

MotoGP Márquez's doubt continues: "His recovery may never be full"

MotoGPMárquez returns for victory in Texas

MotoGP Another circuit upside down, another victory for Marc Márquez