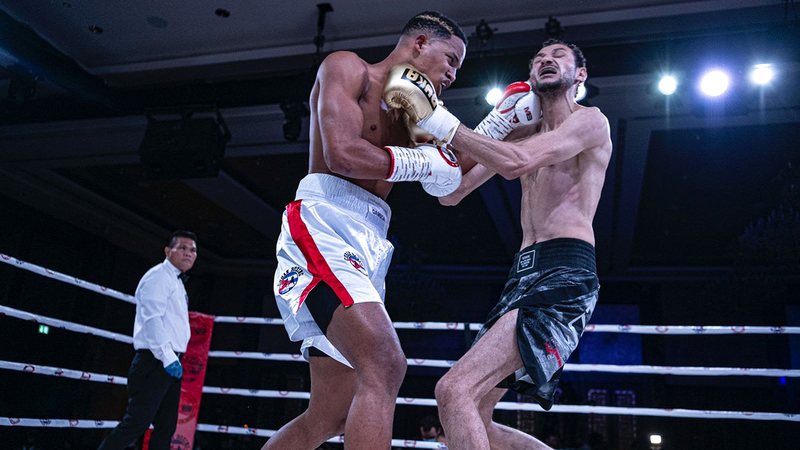 Cubans excel despite the vast age difference with other nationalities

Cuban boxers competed against their competitors in the "People's Fighters" championship.

Boxing fans "noble art" in the Emirates got a golden opportunity to reveal the secret of Cuban boxers' superiority and their control of medals in the Olympic Games since ancient times, by hosting Dubai, the day before yesterday, the "People's Fighters" Championship, the day before yesterday, in the presence of A large audience of different nationalities filled the covered hall of the Conrad Hotel in Dubai, in an evening that lasted until late at night, and was broadcast on a number of international television stations, specifically Cuban.

It was remarkable that the Cuban boxers succeeded in achieving victory in the fights they fought, despite the vast age difference between them and their competitors of other nationalities, as the ages of the Cubans ranged between 18 and 21 years only, and they showed different tactics in attack and defense, during the fights they fought enthusiastically. , with moves similar to the famous salsa dance in the Caribbean.

Many Cubans practice boxing bouts recreationally, as many young fighters are accepted into the centers of preparation for fighters, hoping that one day they will become champions in the world of this sport, to get out from under the weight of economic difficulties, as aspirations are not without profit interest to lift their families out of poverty. and earn more money.

For his part, a member of the event's organizing committee, Zak Mohammed, told Emirates Today, "The tournament had a great presence, presented by the president of the UAE and Asian federations Anas Al-Otaiba, world boxing coach Pedro Diaz, and Cuban boxing legend, world champion Guillermo Ortiz, and that the event was A good opportunity for boxing fans inside the country, to learn the secret behind the Cubans’ superiority in it.”

He pointed out that "reactions about the event were positive, and that after this success, it was decided to hold the event again early next year," noting that boxing fans can currently practice it in the Cuban Emirati Boxing Club, which finally opened its doors in the Al Quoz area for all lovers of this sport. , who can learn the best techniques and training alongside the best.

In turn, the Egyptian boxer Ibrahim Kandil, who is the only Arab who participated in the tournament, said that he was not surprised by the distinguished level of the participants, noting that "the ages of the Cuban boxers are small, and ranged between 18 and 21 years only," considering that their superiority was not strange, especially since Cuba In the game of boxing it is like Brazil in football.

Qandil revealed to "Emirates Today" that the decision to participate in the tournament was a very short time ago, and he said: "Only 15 days ago I knew about this tournament, and I started preparing for it, but I was injured in my foot, which affected me in training and during the fight that I was Soon we will win it.”

The Egyptian boxer, who lost the fight to a Cuban, pointed out that the style of the Cuban boxers is different from the rest of the boxers, and said: “It was a strong fight between us, they have high capabilities, which is the reason behind their control of titles at the Olympic level, and for me it was a good opportunity to get to know each other. to their style, and I am very happy that I got this golden opportunity.”

• Cuban boxers lift their families out of poverty through their favorite sport.

• Only 21 years old, the oldest age for a Cuban boxer in the "People's Fighters" tournament.