'Els Segadors', controversy and the fourth classic followed by Madrid: "Small things, nothing to whistle" 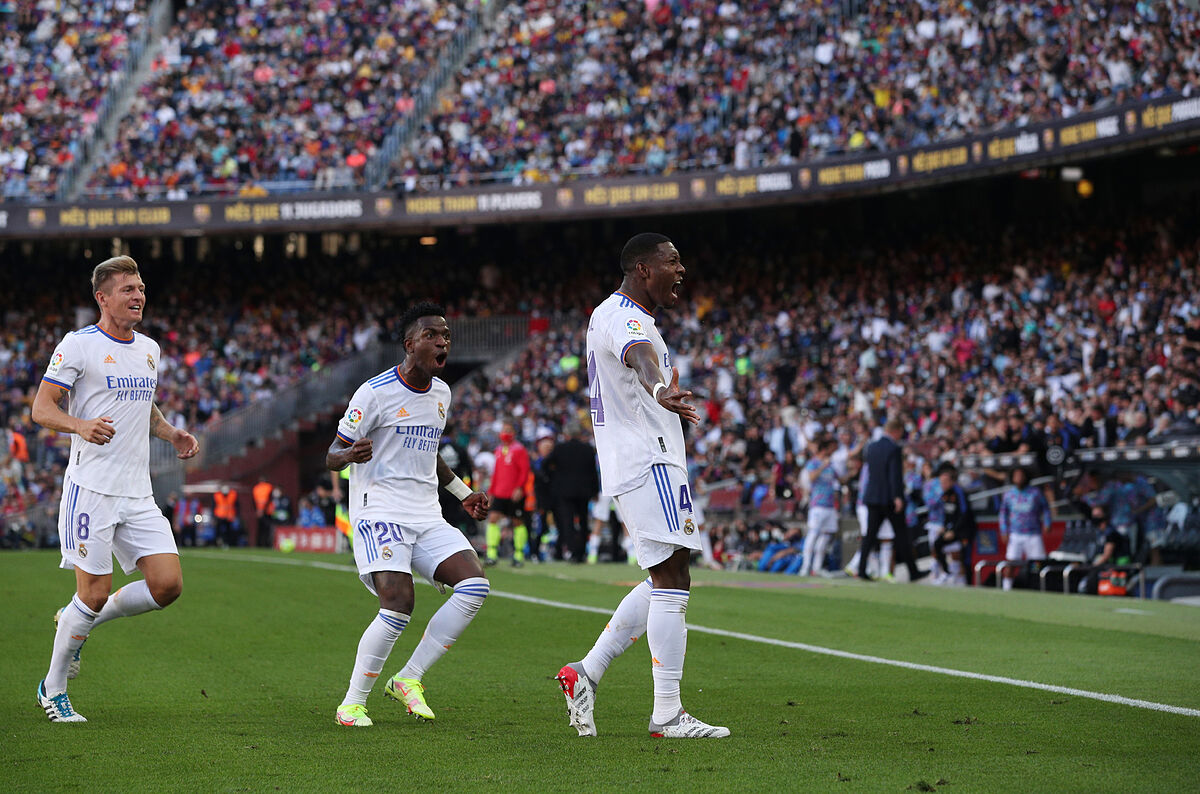 that already sounds so far away, the public returned to a classic. Less than the 93,000 of the last Barcelona-Real Madrid did it, back in

, overcome the collapse at the gates of the stadium, finally cheered their own in the historic duel of Spanish football. There were

on the grass, controversy ... In short:

requested a penalty from

in the first half and insisted to the fourth referee to review a grab from Eric García to Benzema, but he had no luck with

, with whom he was left debating at the end of the first part.

Before the opening whistle, Barcelona, ​​under the order of

, recovered a political moment that it had abandoned during the presidency of Josep María Bartomeu: '

, chose the classic to debut in the

this season, and Laporta had already announced this week that he would respond to his presence with the sounds of

, which did not sound before a match for six years.

"It is necessary to do him the honors that he deserves, that they are in the classic one is a coincidence", explained the president of the Barcelona group, aware that there is no greater media focus than a classic.

The anthem sounded, which is official of Catalonia since 1993, and the fans responded with shouts of

, young faces of a classic without

, embraced before the first second of the meeting. The Brazilian, electric as always, dominated the left wing of the white attack and was the center of the shouts of the local fans. He surpassed Mingueza, faced

, created the 0-1 score for Alaba and enjoyed despairing of Barça and its stands, where

. The national coach would observe the Barça squad more, with

in the starting eleven. In Madrid there was only one:

after five unsuccessful visits to the Camp Nou, two of them with Madrid. "I think it is time to achieve it," he joked yesterday at a press conference. Hence the nervousness of the Italian, who did not stop giving instructions and arguing angrily with his son

. The two clear missed chances by Benzema and some counterattack not taken advantage of by Vinicius in the second half made the transalpine desperate, who lived in the last minutes of very intense triumph.

First Vinicius asked for the change, apparently due to fatigue, and his departure, with a walk in front of the Barça animation stands, was completely less friendly.

Vini is someone who hurts

, has speed, dribbles ... He hasn't scored a goal but he has helped us a lot," Courtois analyzed.

, who had entered for Rodrygo, hurt his knee in a jump with

and had to leave the game a few minutes later.

, a Madrid hero in so many afternoons, suffered a mishap in his right leg when he hit a ball.

He was able to continue, but with some difficulty.

And to finish, a classic icing: controversy and goal. Already in added time, Piqué called for a penalty after being knocked down in the area and the one against

. 0-2 that Barça protested but that the VAR did not annul. Agüero's goal would arrive late for the Catalans.

, another classic won and it is important to continue up there", Courtois valued at the end of the duel.

"In both areas there were small things, but I think not to whistle."

It is the fourth classic that Madrid has won in a row, something that had not happened since 1965, 56 years ago.

becomes the second coach in history to lose his first three Barça-Madrid.

FootballThe Real Madrid infirmary breathes: Alaba and Militao will arrive at the game against Shakhtar and Hazard's injury is not serious