"It was terrible": the judges deprived Melnikova of the World Cup gold in floor exercise after the protest of the Japanese woman Murakami

Angelina Melnikova won the silver medal in floor exercise at the World Artistic Gymnastics Championships in Kitakyushu. During the competition, she was ahead of the main rival Mai Murakami, but the Japanese woman protested her result and, thanks to the additional points, was able to snatch victory. At the same time, the request of the Russian woman to revise her assessment was rejected. Melnikova said she was upset by this outcome. 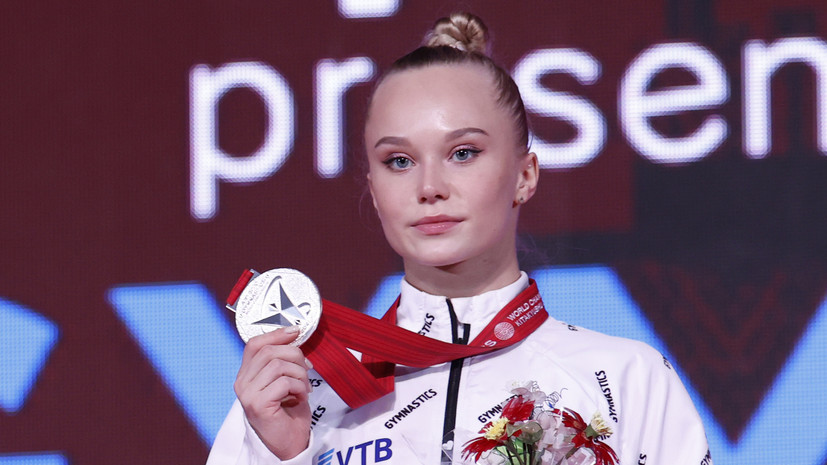 The World Artistic Gymnastics Championship has ended in Kitakyushu, Japan. On the last day of the competition, five finals were held in separate exercises, as a result of which the Russian national team received another medal. Angelina Melnikova added a silver award to her collection, which she received instead of a second gold after a protest from a Japanese athlete.

An ambiguous situation occurred in the floor exercises, which closed the competition program for women.

In this discipline, the main contenders for victory were two gymnasts - Melnikova and the representative of Japan Mai Murakami.

At the Olympic Games in Tokyo, they both became bronze medalists, showing absolutely the same results, and the World Championship gave them the opportunity to determine who is still stronger in this form.

At the same time, for Murakami, the home championship of the planet was supposed to be the last tournament in his career.

In Sunday's finals, Melnikova got an earlier start number than Murakami.

Four athletes managed to compete in front of her, and the American Leanne Wong took the lead, who received 13.833 points.

Behind her was another Russian woman Vladislava Urazova.

Melnikova managed to perform flawlessly all jumps and somersaults, each time showing the most clear landings.

However, her performance caused fierce controversy among the judges.

Instead of immediately announcing the athlete's score, they spent a few minutes calculating the final result.

All this time, Murakami was at the edge of the carpet, ready to start her program.

As a result, Melnikova received 14,000 points and took the lead.

The final chord by Murakami turned out to be no less spectacular.

Her jump junctions were also impressive and perfect.

The spectators in the stands had a premonition that the 25-year-old gymnast would become the world champion for the second time, but the judges initially had a different opinion.

Murakami received 13.966 points and was after Melnikova.

However, the Japanese team did not agree with this result and filed a protest. He was satisfied while the next contestant Maria Cheplinski from Romania was waiting for her assessment. Murakami received one-tenth of a point to her base value and passed Melnikova. The American Kayla Disello, who finished the competition, took fifth place, and the Russian woman was left with a silver medal. Melnikova, following such an unexpected turn of events, stated that the judges had underestimated her assessment and did not even consider her own protest.

“They didn’t count this turn for me.

Never, never have I had a problem with this twist!

I don’t know what happened and why it was not counted.

The protest was not accepted.

I will not even voice the fact that we were told to file a protest.

I'm sorry, I'm upset, I did everything I could, I reached my maximum.

One of my best performances of floor exercises, ”Melnikova wrote on Instagram, attaching a video with the controversial episode.

The senior coach of the Russian national team Valentina Rodionenko also spoke about this.

She is sure that the referees thus deprived Melnikova of her second victory at the World Championship.

“The judges did not count this element, and our coaches promptly filed a protest, which was rejected.

It is useless to prove anything now.

They took her gold, what can I say, because that unaccounted element was worth 0.1 points, which gave Melnikova the opportunity to become the first.

I have no words after all this, ”Rodionenko told TASS.

Earlier on the same day, Melnikova had already experienced no less shock when she participated in the finals of the exercises on the balance beam.

Although this shell is not one of her favorites, the Russian woman had a chance to win a medal on it - in the qualification Melnikova showed the second result and confirmed it in the all-around.

In addition, in the finals, almost all the participants fell from the shell, which made the competition even more unpredictable.

However, the Russian woman did not take advantage of her chance - she also fell immediately after the swoop.

Her compatriot Yana Vorona was also unlucky, who could not cope with her nerves at the debut World Championship and did not keep her balance around the turns.