When Rico Verhoeven reported to the global kickboxing top in 2013, he was still "a puppy" according to his trainer Dennis Krauweel. Eight years later, he is an adult martial arts icon and a showcase for the sport that is becoming increasingly popular in the Netherlands. On the day of the duel with Jamal Ben Saddik, NU.nl and Krauweel look back on Verhoeven's previous nine title fights. The Rise of 'The King of Kickboxing'. 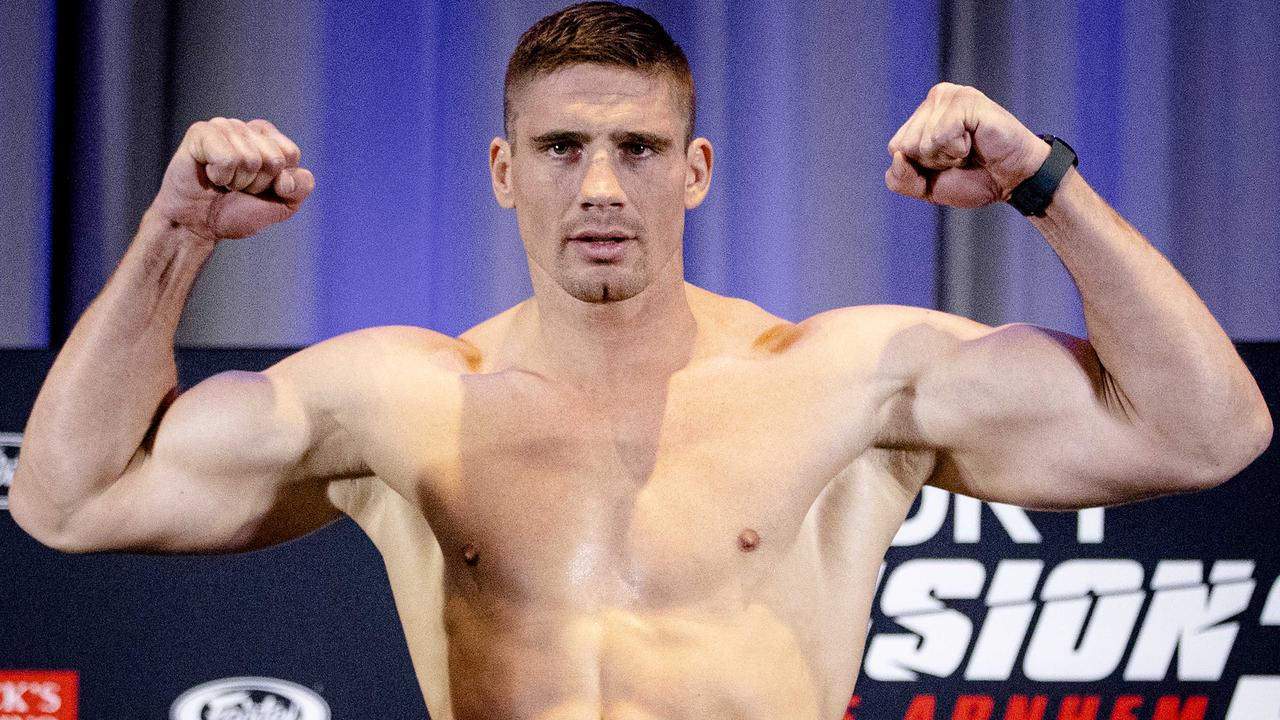 When Rico Verhoeven reported to the global kickboxing top in 2013, he was still "a puppy" according to his trainer Dennis Krauweel.

Eight years later, he is an adult martial arts icon and a showcase for the sport that is becoming increasingly popular in the Netherlands.

On the day of the duel with Jamal Ben Saddik, NU.nl and Krauweel look back on Verhoeven's previous nine title fights.

The Rise of 'The King of Kickboxing'.

Win over Errol Zimmerman on technical KO in second round

Verhoeven became world champion six months earlier in Los Angeles by beating Daniel Ghita. But Krauweel, who has accompanied Verhoeven throughout his career, finds the victory over that Romanian in 2013 at a four-man tournament in Chicago even more special. "Back then Rico was really still a puppy. Before that fight he trained a lot with boxer Tyson Fury and because of that he was able to take a big step forward."

In the title fight with Errol Zimmerman from Curaçao, the inexperience of the then 25-year-old Verhoeven is noticeable.

"You make it a fifty-fifty fight," Krauweel warns him at the end of the first round.

"He started out too aggressive, which turned it into a

," the trainer now looks back.

"He was still young and a bit too emotional, he wanted so badly to show that he was deservedly the champion."

While Verhoeven is not the

loves to slowly build the fight and finish at a later stage, he does have the ascendancy.

The match ends abruptly in the second round when Zimmerman lands incorrectly after a kick and injures his leg.

Verhoeven turns out to be a fast learner, because he starts the fight more calmly against his later training partner Benjamin Adegbuyi.

Even if the Romanian gives him a few good punches in the first round, the Brabander does not get upset.

"In the second round, Rico picked up steam. He showed some very good and fast combinations, which were particularly good for a heavyweight. back.

Training with 'bad loser' Verhoeven: 'That's why he often wins'

Win over Benjamin Adegbuyi by KO in first round

It is hard to imagine six years later, but it is only the first GLORY event on Dutch soil.

Due to some massive fights outside the ring and because of a criminal atmosphere surrounding the sport, major events are not allowed until then.

Sports minister Edith Schippers and the late Amsterdam mayor Eberhard van der Laan are present in the RAI to see for themselves whether kickboxing events are desirable.

"It was a very nice evening with six thousand enthusiastic fans who went wild, but did not cause any problems," Krauweel remembers.

"That day has been very important for the sport to get rid of the negative stamp."

The fight between Verhoeven and Adegbuyi is similar to the previous one, but a lot shorter.

The champion overwhelms his Romanian opponent with a technical mix of kicks and blows, high and low on the body.

That variation becomes too much for Adegbuyi after two minutes and twelve seconds.

The Croat Mladen Brestovac was mainly feared for his high kicks with the left, a danger that Verhoeven manages to avoid for five rounds.

The champion fights dominantly and clearly wins on points.

"He has won almost all his fights by knockout and was barely beatable in that time. Rico has mainly fought well and handled it tactically very well."

Win over Anderson Silva on technical KO in second round

Although Verhoeven has successfully defended his world title for the fifth time, national media only then really start to pay attention to him.

"Three months later the first fight was with Badr Hari and you could already notice that. The attention started to become massive and Rico enjoyed it."

Brazilian Anderson Silva was known as a tough street fighter.

, but Rico didn't give him that chance," says the trainer.

"It was a demonstration on a technical and tactical level."

In the second round, Silva gets eight counts up to three times, so that the victory goes to Verhoeven.

Rico Verhoeven KOs Jamal Ben Saddik at the end of the fifth round.

Rico Verhoeven KOs Jamal Ben Saddik at the end of the fifth round.

Win over Jamal Ben Saddik by KO in fifth round

Prior to Verhoeven's first title fight with Jamal Ben Saddik, an incident takes place during the staredown that is still much discussed four years later.

"A bad thing for the sport," says Krauweel.

"And that he later lies about the reason, I think it is even worse. That signifies that man."

During the fight Verhoeven takes a big blow early on.

"That was a bit of a shock, but luckily Rico was able to solve it defensively for the rest of the first round and he was not really hit anymore."

After Verhoeven is patched up between the first and second rounds, he takes the initiative and knocks out Ben Saddik in the fifth round.

Aggression explodes as he takes on his rival at the end of the fifth round.

"You can't blindly go after someone in search of a knockout, but you always have to wait for the right moment during a match. Sometimes it comes, and sometimes it doesn't. Then a victory on points is also good."

"Rico has never lost a second fight to anyone. When he meets an opponent for the second time, he knows very well what to expect. He knows exactly what distance to keep and how to strike," says Krauweel.

The second victory over Brestovac is comparable to the first.

Verhoeven neutralizes the Croat's left high kicks and dominates the fight until the end of the fifth round.

"The first match was still a bit messy, the second time was really clean," Krauweel said.

"Offensively, Rico came through better and he didn't give Brestovac a chance."

Rico Verhoeven never gets into trouble against Brazilian Guto Inocente.

Rico Verhoeven never gets into trouble against Brazilian Guto Inocente.

Verhoeven is a technically and tactically excellent fighter with a superior physical and condition.

The only criticism he gets after three years as world champion is that he doesn't go enough for the KO.

"We knew about Inocente in advance that he never actually loses by KO, he always gets up and continues. He remained very defensive for five rounds, so it was not easy for Rico to force something," says Krauweel.

The Brazilian is so desperate by the dominant Verhoeven that he throws out an illegal judo throw in the fifth round to provoke the champion.

"He hoped Rico would get angry and fight more aggressively, but Rico kept calm and finished the match without any problems."

Rico Verhoeven and Badr Hari fought in front of more than 30,000 spectators and 3.5 million TV viewers in the GelreDome.

Rico Verhoeven and Badr Hari fought in front of more than 30,000 spectators and 3.5 million TV viewers in the GelreDome.

Win over Badr Hari on technical KO in third round

Of all his title fights, Verhoeven against Badr Hari gets in the most trouble.

It was later announced that Verhoeven was mentally not top that evening due to private problems (his relationship is about to explode).

"He was a bit out of balance and a bit too emotional, so he went along with Badr," says Krauweel.

The coach still thinks that Verhoeven was far from hopeless if Hari had not been injured.

"In the first round Rico got eight counts for the first time. He immediately got up and after that it was an even battle, but he was behind 10-8 because of those eight counts. In the second round Rico was clearly stronger and you saw that Badr was starting to have a hard time."

Despite this, Hari managed to give his opponent another eight count early in the third round with a high kick. "It is a basic rule that you should always be alert at the start of a round. No matter how hard your opponent has had it, he has been boosted by his coach and has still been able to find some strength and energy", Krauweel is critical of his pupil.

"Badr made a brilliant move, really beautiful. You can't say anything about that. Of course he was even further ahead, but we were only halfway through, weren't we. I had every confidence that Rico would still take the game to himself It's a shame it had to end like this with that injury, because it was a wonderful evening with 32,000 spectators in GelreDome and 3.5 million TV viewers. When Rico and Badr retire later, they can say that they are together have reached."

Why the fight between Verhoeven and Ben Saddik is so fraught

According to Krauweel, Verhoeven is still getting better.

"He has really become a man in recent years, a father of three children as well. He now always sticks to the game plan

and does not let himself be

off balance. Moreover, he is still getting stronger. Against Jamal he will again play a half. kilograms heavier than in the previous fight."

On Saturday, the GelreDome will once again be the stage for a sport that was not allowed to organize major events in the Netherlands six years earlier.

With Verhoeven as a role model, kickboxing has grown rapidly in a relatively short period of time.

"Rico has always been very approachable to fans," said his trainer.

"Of course we can't say yes to everything, but we often do. I think it's very special how he presents himself as a sportsman. Rico has become an ambassador for NOC*NSF as a kickboxer, I'm very proud of that," says Krauweel .

Jamal Ben Saddik and Rico Verhoeven at the staredown on Friday.

Jamal Ben Saddik and Rico Verhoeven at the staredown on Friday.