Fire show in the stands and infiltration on the pitch: how fans almost disrupted the Ligue 1 match Saint-Etienne - Angers

Fans of Saint-Etienne almost disrupted the home match of the French championship with Angers. Before the start of the game, fans dissatisfied with the latest results of the team used pyrotechnics to burn holes on the goal net. They also staged a large-scale fire show in the stands. To calm the fans of the hosts, the police appeared at the Geffroy-Guichard stadium. The referee had to take the teams off the field, but an hour later the meeting started. 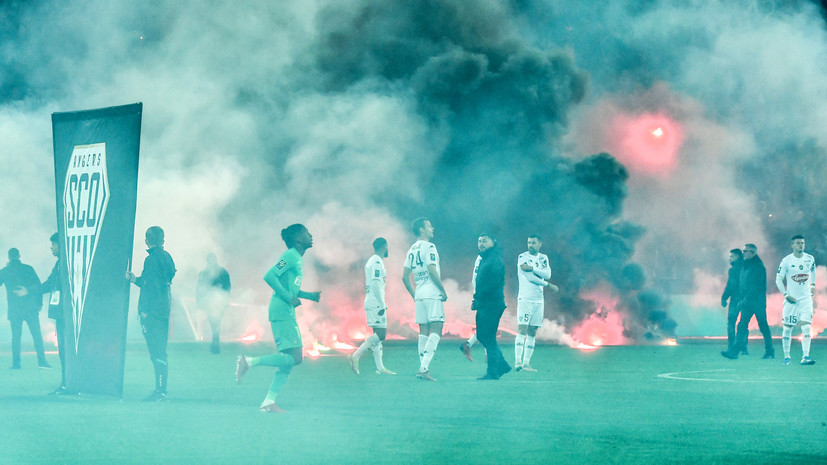 The 11th round match of the French Football Championship between Saint-Etienne and Angers was overshadowed by fan riots.

The game was supposed to start at 22:00 Moscow time, but started only an hour later due to the aggressive behavior of local fans.

The delay was caused by the penetration of several outsiders into the field, who burned the net on the goal with firecrackers.

Also, the owners' fans threw fireworks on the lawn and staged a large-scale pyrotechnic show in the stands.

Thus, they protested against the management of the club and the head coach of the team, Claude Puel.

It was simply dangerous to hold a meeting in such conditions.

The police had to intervene in the situation, which surrounded the field around the perimeter.

Referee Antoni Gaultier was forced to send both teams to the locker room.

After a while, the players still returned, and the referee blew the starting whistle.

At the same time, the announcer at the Geffroy-Guichard stadium announced that in the event of a resumption of illegal actions, the fight would be stopped completely.

Fortunately, everything went on relatively calmly, and the fans even witnessed Saint-Etienne's comeback.

During the second half, the greens were losing with a score of 0: 2, but managed to escape defeat by scoring the decisive goal in added time by the referee.

Perhaps the character shown by the favorites will temporarily pacify the anger of the fans.

Puel himself, against whom the actions of torsida are mainly aimed, after the final whistle, remained surprisingly calm.

According to him, the incident only motivated the wards additionally.

“We discussed this moment all together in the dressing room.

The players were motivated, ready to fight.

Before entering the field, I had to warm up very quickly.

Angers tried to take advantage of the situation by starting aggressively, but we stayed in the game and showed professionalism.

It is important that we managed to maintain concentration, ”the official website of the club quotes the specialist as saying.

In turn, his colleague Gerald Batikl admitted that the main task during the unplanned hour-long break was to keep the players in good physical condition.

“We returned to the dressing room at the same time as Saint-Etienne.

We tried to keep the players warm and not cool down.

Carried out small movements on the spot.

The referee assured us that he would warn us about returning to the field in ten minutes, "the Ekip coach quotes.

He also expressed bewilderment at the behavior of the fans, who, in his opinion, should be happy to be able to visit the arenas after a long pause.

“We should be happy to see each other, feel a great holiday.

It is necessary that the responsible persons find a solution to these unrest, so that we can again perceive football as a holiday, ”added Batikl.

However, the atrocities committed by the owners' fans did not come as a surprise.

Even on the eve of the game with Angers, they hung out a banner demanding Puel to leave his post within 24 hours.

The request was not fulfilled.

Then an open letter from one of the leading gangs of Saint-Etienne MagicFan91 appeared on social networks.

In it, the members of the organization promised to come to the Geffroy-Guichard stadium only to the starting whistle and refrain from supporting the team.

The dissatisfaction of the club's fans is understandable, because the ten-time champions of France in recent years have not shone with results. In 2019, the greens took the high fourth place in the national championship under the leadership of Jean-Louis Gasset. However, at the end of the season, it was Puel who replaced him. After that, a sharp decline began. In 2020, the renowned team almost flew out of the elite division, taking 17th place. In the next League 1, he was also forced to fight for survival, and only in the end he straightened out the situation and finished in 11th place. The only bright spot was reaching the French Cup final.

This season started even worse for Saint-Etienne. In the first ten rounds, the team scored only four points without scoring a single victory, and sank to the bottom of the standings. The last straw was the humiliating crushing defeat from the modest Strasbourg - 1: 5. In such a situation, it is difficult for Puel to win the fans' love. He is reproached for excessively closed rational football and reminiscent of the past. The coach spent his entire football career at Monaco, which local fans dislike.

Separately goes to the management of the club in the person of the main shareholders Roland Romeier and Bernard Cayazzo.

Back in April of this year, they announced their desire to sell Saint-Etienne, which has a huge debt, but this has not yet been done.

In September, Prince of Cambodia, Norodom Ravichak, announced his interest.

He promised to take care of the ten-time champions of the country and attract reliable partners.

However, the deal did not materialize.

According to the French media, according to the results of the audit, the potential buyer was not satisfied with the financial condition of the club.

It is also reported that the best offer was made by businessman Olivier Mararian.

Until the new owner is found, the green ones are forced to save on everything.

In recent years, the management has had to sell leaders, and in return, take on either inexpensive footballers or free agents.

Unfortunately, the current scandal involving fans is not the first in the current season of League 1. At the end of August, riots broke out in the game of the third round of the national championship between Nice and Marseille.

Then the match, which took place at the Allianz Riviera stadium, was terminated ahead of schedule in the 75th minute.

It all started when a bottle was thrown from the podium at the Olimpik striker Dimitri Payet.

The hit turned out to be so strong that the player who was trying to take a corner fell to the lawn.

Rising to his feet, he tossed her back.

This provoked a race on the field of fans and a fight with the participation of both teams.

One of the fans even managed to stab Payette.

The meeting was first interrupted indefinitely. And the fans of the owners tried to calm down personally the president of the club, Jean-Pierre River. However, the mentor of the guests, Jorge Sampaoli, took his team off the field and refused to return. The specialist could be understood, because his football player had recently been injured after being hit by a foreign object. In the opening round, Valentin Rongier's lip was smashed with a bottle of blood.

As a result, the refereeing team credited Marseille with a technical defeat, since the Olympic did not appear on the pitch.

But later the leadership of Ligue 1 made a different decision and decided to replay the meeting on neutral territory.

At the same time, two points were removed from Nice, one of which was conditional.

Physiotherapist of the Marseille team, Pablo Fernandez, who took an active part in the fight, was completely suspended from football activities for nine months.

The fans of the "eaglets" also suffered severely.

The fan tribune of the team was closed for four fights, and the fan who attacked Payet received a suspended year in prison.