"He brings Zenit a lot of points": Igonin on the role of Dziuba, Lovren's mistakes and the derby of the two capitals with Spartak

Artyom Dziuba is likely to appear on the field from the first minutes in the RPL round 12 match with Spartak. This was stated in an interview with RT by the former captain of Zenit Alexei Igonin. According to him, the striker, despite criticism against him, continues to be of great benefit to the team. The expert also doubted that Sergei Semak would change the formation in the derby, explained who could replace the injured Claudinho and Malcolm, and named the main drawback of Daler Kuzyaev. 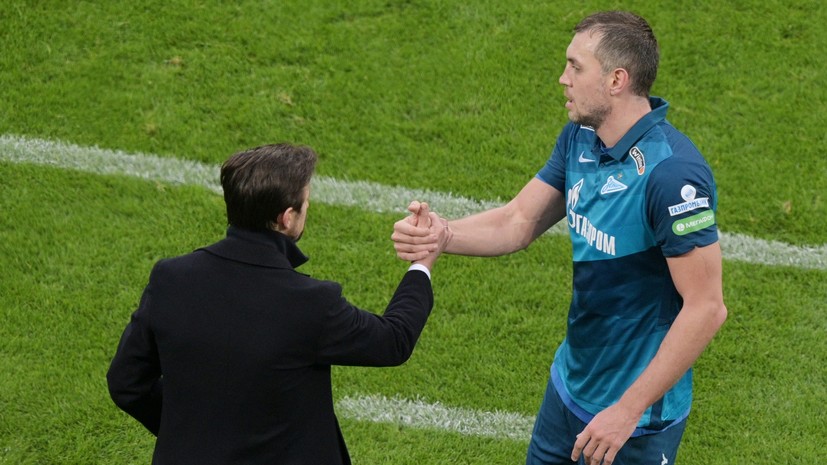 - Despite the problems in defense, Spartak have conceded more RPL goals this season than they should have in terms of expected goals. "Zenith" is famous for the fact that it carefully uses the chances at the wrong gate. Will the upcoming match be a bigger test for the defense of the red and white or the attack of the home team?

- Much will depend on who will take to the pitch. Petersburgers have several options. Now, for example, the question of the expediency of using Artyom Dziuba is being widely discussed. If he appears in the attack - this is one story, and if Serdar Azmun - another. The third option is to bet on the Brazilians, who have begun to determine the entire game of the team. I think they will build on this. As regards Spartak's defense, everything is more or less clear. It is unlikely that we will see changes in this line that will drastically affect the result. At the same time, unfortunately, many questions arise about Zenit's defense. If Sergei Semak's wards had acted more reliably, everything would have turned out differently in previous fights. But the attack gives the result and is one of the best in the league.

- You yourself have raised the topic of Dziuba.

on the opinion of the famous commentator Konstatin Genich, Artem not have to include the basis for the game with "Juventus".

And his colleague Gennady Orlov stressed that the forward no longer corresponds to the European level.

Do you agree with this position?

- Dziuba is really criticized a lot.

But this is primarily due to his work on the field.

If we evaluate the efficiency of a football player as a whole, it is very high.

Yes, he doesn't win much of the fight and does not do enough running work.

However, it is still marked by goals.

Therefore, I understand the coach's desire to see Dziuba on the field.

Of course, it would be great if he could do everything at all, but where in Russia can we find such players?

- What do you mean by its efficiency in addition to directly effective actions?

- He brings the team an incredible amount of points.

I, perhaps, would also like to see a striker capable of running away into a counterattack at the base of the game against Juventus.

But we must not forget about the high-class and fast defenders of Turin.

With such a line of defense, Dziuba and Serdar Azmun had absolutely equal chances to benefit the Petersburgers.

None eventually took advantage of them.

The half-moments were mainly in the Brazilians.

That is, the emphasis is shifted to the performers who are located under the attackers.

This is what makes the current Zenit interesting - now not only two forwards are attacking.

- Do you admit the option in which both Dziuba and Azmun will appear in the derby from the first minutes, taking into account the

injuries of Claudinho and Malcolm?

- Everything is possible, but I do not think that Semak will deviate from the current scheme.

In my opinion, it is quite interesting and working.

If it were not for mistakes in defense, we would not even talk about other formations, but talked about what role the Brazilians play in the previous one.

Although there are no questions about the very tactics and disposition of the defenders.

- Is it more logical to start the match against Spartak with fast Azmun at the fore, taking into account the injury of

Samuel Gigot and the possible appearance of a

in the center of defense of Muscovites

- It seems to me that Dziuba will be included in the basis.

I would like to see Azmun in the second half, when you need to add movement.

In any case, it will be a gain.

If Semak makes a choice in favor of Serdar, Artyom can appear only at the end, when it is impossible to combine and it is required to organize a bulk.

In my opinion, with Dzyuba at the start, Semak will have more room for maneuver to revive the game later.

- Whom do Spartak players prefer to use in the center of defense in the absence of Zhigo - Ilya Kutepov, Ilya Gaponov or Nikolai Rasskazov, who was harshly criticized after the meeting with Leicester?

- I can't even imagine how Rui Vitoria looks at this situation, but I remember how Kutepov skipped long periods, and then appeared on the field as if out of nowhere and even pulled out individual meetings.

Therefore, Ilya, I am sure, is ready psychologically.

It all depends only on the decision of the coach.

Most likely, the first place will come to the understanding of tactics and some personal qualities of the performer.

Zenit start attacking more often through the left flank, keeping in mind the opponents' problems in the zone of the right central defender?

- In any case, the red and white will react to their shortcomings in the match with Leicester.

I think the team has sorted everything out, and one should hardly expect similar mistakes from it.

Much will depend on the composition of the red and white, and Semak on the installation will pay attention to him.

But at any moment Spartak can change the formation and the players.

I think the Petersburgers will not have the task of acting through the left flank - Muscovites' problems will be noted here, but nothing more.

- Do you note the importance of the Brazilians in the current Zenit model, and with whom should Semak replace the injured Claudinho and Malcolm?

- They are, of course, skilled guys, but they are often dependent on the opponent.

That is, if the opponents are good at selection, the Latin Americans do not show themselves so brightly.

At the same time, it is difficult to single out one of them.

The roster of the reigning champions includes Danil Krugovoy and Daler Kuzyaev.

These players in the Russian championship are perfectly able to compete with everyone, including Spartak.

Derby is just an opportunity for them to prove themselves.

- Kuzyaev has made serious progress lately.

Can he be called one of the best RPL players in his position at the moment?

- Daler has always been a high-level performer.

In addition to the experience he has gained, he now plays a slightly different football, and therefore looks more valuable for the team.

But I am worried that Kuzyaev is giving off a lot of unnecessary aggression and violations.

I don’t know what it’s connected with.

Yellow cards force the coach to change Kuzyaev during the matches, although he is very important for Semak.

- That is, his main problem is incontinence?

- Emotional discipline, to be more precise.

He should approach some episodes in an adult way.

I'm sure Semak also constantly points out this to Dahler.

It's hard not to notice such a gap, because the midfielder plays both in the Champions League and in the national team.

Therefore, it is not entirely clear why he commits stupid fouls.

Then, after all, it is necessary to rebuild for this reason.

- In any case, Zenit, at first glance, has a clear advantage over Spartak in terms of names in the center of the field ...

- In blue-white-blue, this zone is quite saturated.

Although I don't think it will be important in positional play.

With counterattacks, it is possible.

The reds and whites can always surprise you.

Quite high-quality footballers are gathered there.

With the right emotional mood, the guests will understand that they can play against Zenit.

Moreover, in such matches it does not matter who is in what place.

- If the guests place their stake strictly on defense, it will be difficult to fail.

It is one thing when the players are in their zones and try to insure their partners, and it is another thing when they get stuck in the attack and are scattered around the entire perimeter of the field.

In the second case, problems are possible.

But they can arise not only in Spartak.

In meetings with Petersburgers, who rely on the Brazilians who are rapidly going ahead, difficulties appear for any team in the Premier League.

- You have repeatedly noted that you like the current Zenit scheme.

But after Dejan Lovren's mistakes, wouldn't it be better to return to the line-up with two center-backs?

- The options for replacing a Croat when playing three defenders are clear to me, but you shouldn't deviate from the current model. Still, Zenit's football has become much brighter, more colorful and diverse. Although during the matches we saw how Semak sometimes returned to the formation with two players in the center of defense. However, the current scheme provides an adequate level of reliability with those players who are in the cage. And I would not say that Lovren was frankly mistaken in the fight with Juventus. On the one hand, the defenders played more in line on the ball, but I would note the oversight of the defensive player in the moment with Dejan Kulushevski's goal. He should go lower in such situations, especially since the Turitsnev rally was long, they had enough time to carry out an attack.

- It should be noted that Zenit concedes at least one goal in five rounds of the RPL in a row.

Spartak has a set of players in attack just as good as Sochi and Arsenal.

What should Semak do to neutralize the danger at his own gate?

- In my opinion, the mentor did his best.

The circuit is already geared towards letting in as little as possible.

Here it is already necessary to ask the players themselves.

Look at their qualities and functional readiness.

The same Yaroslav Rakitskiy is able to consistently perform at a good level, even if he is forced to enter the field in the New Year.

But the mistakes of Dmitry Chistyakov and Lovren are too simple and surprising.

But in fact, Semak does not have such a rich choice.

Plus, he has to play a lot of matches, so his players get trite.

Is it worth betting on him in the derby, given the experienced Mikhail Kerzhakov?

- Despite some shortcomings, he plays well with his feet, that is, in the current scheme he is one of the point guard players.

Such a role for Stanislav allows Rakitskiy to calmly receive the ball from the left, although before the Ukrainian, the attackers managed to cover the opponent.

And now he is not the only one who can launch the attack.

For this, Kritsyuk was acquired.