Coach Mahdi Ali's substitutions contributed to leading Al-Ahly youth to win over Al-Jazira with two goals against a goal in the seventh round of the ADNOC Professional League, yesterday, at Rashid Stadium in Dubai, to raise the "Dubai Knights" score to 14 points, and advance to second place in the standings list, while stopping Credit "Pride" 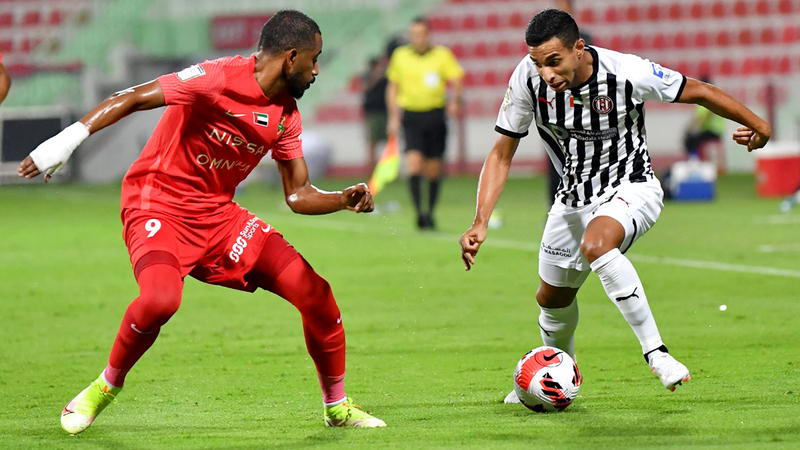 Shabab Al-Ahly inflicts the second loss on the “title holder”

Al-Ahly youth knew how to deal with Al-Jazeera attacks.

Coach Mahdi Ali's substitutions contributed to leading Al-Ahly youth to win over Al-Jazira with two goals against a goal in the seventh round of the ADNOC Professional League, yesterday, at Rashid Stadium in Dubai, to raise the "Dubai Knights" score to 14 points, and advance to second place in the standings list, while stopping The balance of "Pride of Abu Dhabi" is at 13 points, after receiving its second loss and falling from the runner-up to third place.

Coach Mahdi Ali played with an unexpected squad after he included only one foreign player, Uzbek Aziz Ganyev, while keeping both the Brazilian Carlos Eduardo and the Iranians Ahmad Nourallah and Mehdi Qaidi on the bench.

On the other hand, Dutch coach Marcel Kaiser participated for the first time in the four foreign players since the start of the match: Serbian Milos Kosanovic, South African Thulani Serero, Mali's Abdallah Diaby and Brazilian Joao Victor.

Muhammad Juma Pele missed an opportunity completely alone with the goal, and hit a weak ball, which was pushed away by the Al-Jazira defense (7), while the visiting team scored the first goal of an organized attack that reached Ali Mabkhout, who passed a wonderful ball behind the defenders of the "Dubai Knights", and Abdullah Ramadan received the ball and shot it. Skill in the goal (15).

Al-Jazira continued his advantage and Ali Mabkhout almost added the second goal with a powerful shot from inside the penalty area, but goalkeeper Majed Nasser brilliantly removed the ball (20), while excitement rose after the Brazilian Joao Victor scored the second goal for Al-Jazira team, but the Turkish referee Shakir canceled the goal for infiltrating Malian Omar. Traore, before also canceling a goal scored by Abdullah Al-Naqbi in favor of Al-Ahly youth for infiltrating Yuri Cesar (31).

In the 40th minute, Brazilian Yuri Cesar scored the first goal for Shabab Al-Ahly when he followed a corner kick played by Aziz Ganyev and Cesar completed it in the goal.

In the second half, Mahdi Ali made three changes, with Mahdi Qaidi, Carlos Eduardo and Ahmed Nourallah replacing Yuri Cesar, Muhammad Jumaa and Aziz Ganyev. The match was won by Shabab Al-Ahly.

• "Dubai Knights" raises its score to 14 points, and advances to second place.

Turkish referee Cüneyt Şakir attracted attention in the Al-Ahly and Al-Jazira youth summit in the seventh round of the ADNOC Professional League, after he canceled two goals by one goal for each team in the first half of the match.

The match witnessed the return of foreign referees to the UAE League for the first time in 35 years, with Turkish referee Cüneyt Şakir assuming the management of the meeting, and Bahatin Duran and Tariq Najon helped him, as Shakir imposed his strong personality on the players during the meeting, and used the yellow card three times, after warning a player Shabab Al-Ahly, Uzbek Aziz Ganyev in the 11th minute, after Ganyev intervened strongly against Al-Jazira player, Joao Victor, before Shakir warned in the 12th minute the Al-Ahly youth player Abdulaziz Heikal, who moved before the referee’s whistle while the Serbian Milos Kosanovic shot a direct free kick for Al-Jazira, As for the third card, Al-Jazira defender Mohammed Al-Attas got it after he obstructed the Brazilian Yuri Cesar before entering the penalty area (24).

As for Shakir’s most prominent decisions, it was the cancellation of a goal scored by Joao Victor in the 28th minute after the Turkish referee received a signal from the team of video technology referees, that there was an infiltration against Al-Jazira player, the Malian Omar Traore, and the same thing was repeated by canceling a goal scored by Abdullah Al-Naqbi for Al-Ahly youth team in the 31st minute due to the presence of He infiltrated the Brazilian player Yuri Cesar, and the remarkable thing was the speed of the Turkish referee's decision to cancel the two goals, as his decision on both occasions did not exceed one minute, without personally witnessing the two cases.

On the other hand, the second half witnessed a great commitment from the players in addition to the lack of controversial arbitration cases, which contributed to the absence of any objection from the two teams to the decisions of Turkish Shakir, who counted three minutes of lost time in the second half, especially since the match did not stop for anyone to fall. The players, and the referee did not use video technology in any case, with the exception of contacting the referees’ staff to ensure the validity of the second goal of Al-Ahly youth.