Victory 11 years later: Melnikova won gold in the all-around at the World Championships in artistic gymnastics

Angelina Melnikova won gold in individual all-around at the World Artistic Gymnastics Championships in Kitakyushu. She became the first Russian woman in 11 years to win this discipline. The second and third places were taken by American women Leanne Wong and Kayla Disello. The fourth was Vladislava Urazova, who failed to win a medal due to a fall on a balance beam. 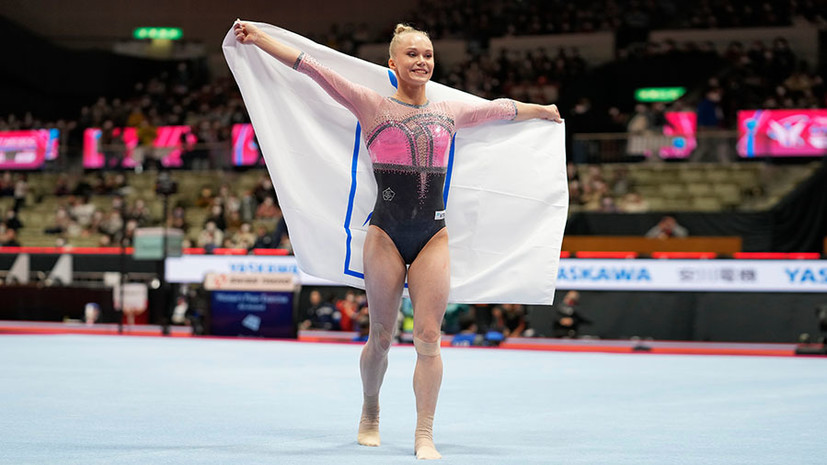 The drawing of medals at the World Artistic Gymnastics Championships in Kitakyushu began with the triumph of Angelina Melnikova.

She won gold in the most prestigious discipline - the women's individual all-around.

For the first time in 11 years, a Russian athlete managed to win the absolute championship.

Melnikova's success was not unexpected. Even before the start of the competition, she was among the main contenders for victory, since many favorites did not come to Japan - neither the Olympic champion Sunisa Li from the USA, nor her honored compatriot Simona Biles, nor the current vice-world champion Tang Sijing from China.

In the course of qualification, which took place on Monday and Tuesday, the chances of the 21-year-old Russian have only improved. First, the main competitors continued to refuse to fight it. The all-around final could have been decorated with a duel with Brazilian Rebeca Andrade, who won silver at the Tokyo Olympics. But she did not perform in floor exercises, despite the fact that in all other forms she made it to the finals and even showed the best results in the vault and parallel bars. The Japanese Mai Murakami, who became the fifth at the home Games, also did not enter the all-around.

Secondly, the bronze medalist of the Olympics herself held the qualification in one breath, showing her best side. She qualified for the finals in all four forms, and even on the not-so-favorite beam she was right behind the Chinese woman Luo Rui. In none of the disciplines did she find herself below fourth place, and if we discard the results of the athletes who did not plan to perform in the all-around, then Melnikova did show either the best result or the second. The Russian woman won the qualification with a margin of 1.316 points from the American Leanne Wong - it was difficult to submit a more confident application for the final.

In addition to Melnikova, Vladislav Urazova passed the selection in the all-around, who lacked 0.233 points to the Olympic bronze of her compatriot.

The debutante of the World Championships took fifth place and performed much lower than her capabilities, having not avoided mistakes in the vault and floor exercises, but retained her chances for a medal.

The final began for the Russian girls with a vault.

Melnikova stepped back a little on landing and scored the same 14.466 points as in qualifying, but did not take the lead.

Another American Kayla Disello was ahead.

Urazova made her program easier and, with good performance, was only 12th due to a low base mark.

After the bars, Melnikova did not lag behind anyone.

Confident execution of the entire program and a clear landing brought her another 14.533 points.

For Urazova, this shell also turned out to be happy - the judges rated her only two tenths worse and allowed her to rise to third place following the results of two rotations.

Wong rose to the second, and her compatriot Disello was forced to retreat - at the very beginning of her program, she fell off the bars and fell.

The moment of truth for Melnikova came on a log.

Not avoiding small mistakes, the Russian woman still managed and got the well-deserved 13,800 points, slightly yielding to her qualifying result.

As it turned out, none of the gymnasts scored 14 points that day, so her leadership was not shaken.

But this shell destroyed the chances of Urazova for a medal.

The 17-year-old athlete immediately fell off him as soon as she climbed up.

Although she had a very outstanding program, both American women had to give up their place in the top three.

Moreover, Wong managed to close the gap with Melnikova to 0.492 points before the final show, returning the intrigue to the fight for gold.

Wong continued to put pressure on the leader of the competition and performed flawlessly in the floor exercises, unleashing her full potential.

Melnikova was left without the right to make a mistake, but she did not need it.

The Russian gymnast did an excellent job on the platform and earned the same performance marks as the American, and lost only two tenths in difficulty.

With a final score of 56.632 points, Melnikova won her first world title and broke the hegemony of girls from the United States, who have certainly won the all-around since 2011.

Before her, the last Russian woman to win gold was Aliya Mustafina.