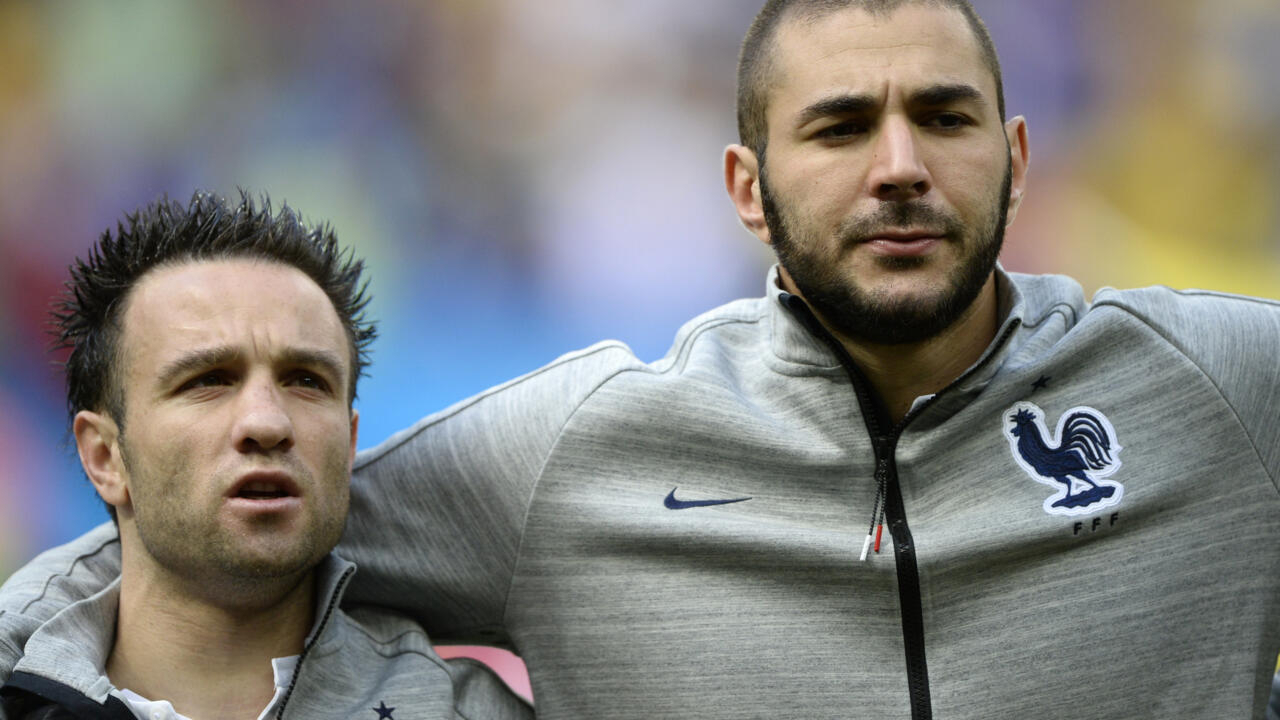 Mathieu Valbuena and Karim Benzema before the 8th final of the World Cup between France and Nigeria, on June 30, 2014 in Brasilia Franck FIFE AFP / Archives

A fine of 75,000 euros was also requested against the striker of the France team, candidate for the Golden Ball and absent from the trial in Versailles.

"Benzema is not a good Samaritan who came to help, he acted to allow the negotiators to come to their end and the blackmailers to touch money", said during his indictment the prosecutor Ségolène Marés , who pointed to the "authority and notoriety in the France team" of the former striker of Olympique Lyonnais.

"He is included in this team, he joins in this project" of attempted blackmail around an intimate video, she said.

The other prosecutor Julien Eyraud for his part recalled the role in society of the star of Real Madrid, "bearer of an image, hope, notoriety and moral values".

Against the four other defendants, prosecuted in this case for attempted blackmail, the public prosecutor requested sentences ranging from 18 months in prison suspended to four years in prison.

Throughout the debates, the four defendants depicted a world watered by players' money and where "services" and pressure blows are exchanged, against luxury watches, leather goods or sextapes.

In his plea, Valbuena's lawyer, Me Paul-Albert Iweins, denounced Benzema's "mafia speech" during his intervention in this case, even comparing him to "a godfather".

Mathieu Valbuena with his lawyer Paul Albert Iweins questioned by reporters in the "sextape" affair between him and Karim Benzema in the court of Versailles, October 20, 2021 Thomas SAMSON AFP

His client, he recalled, was "excluded" from the national selection while he is the victim of this case.

"We deprived him of his Grail by sordid maneuvers and the betrayal of a teammate," he said.

Angot, Zouaoui and Houass, Me Benjamin Peyrelevade, the lawyer for the French Football Federation (FFF) thundered: "The voice of these three who pollute the world of football has entered, directly or indirectly, in a room of Clairefontaine ", the training center of the Blues.

An allusion to the role allegedly played by Karim Benzema, commissioned by the blackmailers to Valbuena.

"Courage to say no"

The FFF, civil party in this case, "must protect its players", he said, welcoming the attitude of Valbuena, the "first player who has the courage to say no, to resist, to file a complaint".

Mathieu Valbuena did not attend the requisitions and pleadings.

At midday, the 37-year-old midfielder, who spoke for a long time on Wednesday about the consequences of this blackmail attempt for him and for his career, left the court in Versailles and joined Frankfurt, where his team of Olympiakos play a Europa League match in the evening.

Very talkative in front of the press and in the courtroom, he had nevertheless made fun of the former player of Olympique de Marseille on Wednesday at the bar.

Karim Benzema did not attend the debates, his lawyers having put forward his "professional" imperatives.

After the debates on Wednesday evening, one of the advice of the striker of the France team, Sylvain Cormier, spoke to journalists of Mathieu Valbuena's "resentment" and "jealousy" against the attacking the Blues.

Mustapha Zouaoui, involved in the sextape affair, responds to journalists before the opening of the trial at the Versailles Criminal Court on October 20, 2021 Thomas SAMSON AFP

"His calculation is simple: + me, I was sidelined, I no longer found the France team, and sportingly I declined + and then opposite, there is Karim Benzema who flies over world football current, "the lawyer also commented.

His client theoretically incurs a maximum penalty of five years in prison and a fine of 75,000 euros.