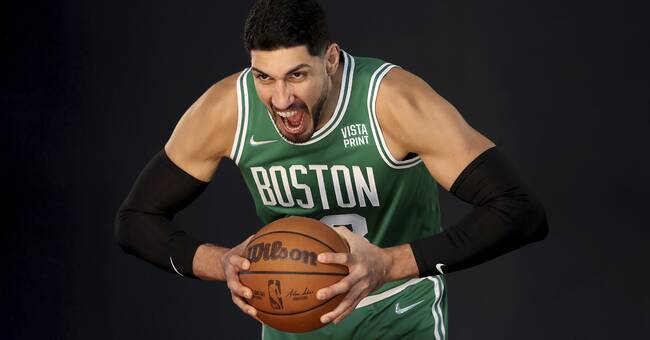 The reason is a post on social media where Kanter does not mince words about the Chinese government in Tibet and the Chinese president.

Kanter also expresses that he supports "his Tibetan brothers and sisters in the demands for freedom", alongside a picture of shoes with the text "Liberate Tibet".

The shoes were also worn by the NBA player when he sat on the sidelines during the Boston Celtics series premiere against the New York Knicks on Wednesday (loss 134-138) - and the reactions from China were not long in coming.

The name is blocked

Future TV broadcasts from Boston matches seem to be stopped on the Chinese streaming site Tencent just to be followed in text and image.

According to Reuters, Kanter's name also seems to have been blocked on the popular messaging platform Weibo in China.

According to China, which calls the takeover of Tibet in 1950 a "peaceful liberation", the NBA player's statements are a way to "get attention".

"We will never accept these attacks to discredit Tibet's development and progress," said Wang Wenbin, a State Department spokesman.

Enes Kanter has previously made himself known for his political involvement and has upset the Turkish government with his statements about Turkish President Recep Tayyip Erdogan, whom he has also called "dictator".

This is not the first time that China-critical proposals from the NBA are attracting attention.

Morey later apologized, but the Chinese government stopped NBA broadcasts in the country.

The conflict with China is believed to have cost the NBA several billion kronor in lost revenue for television contracts, sponsorship and sales of supporter products.

CLIP: Enes Kanter: "It's sad that I have to live with an alarm button by the bed" (May 3)