Sweden took their third straight victory in the World Cup qualifiers when Ireland were defeated away by 1-0. An own goal by Louise Quinn in the first half was the only goal of the match. 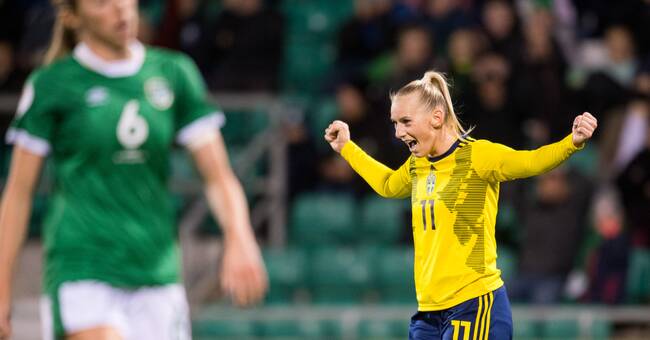 Blue-yellow missed Caroline Seger and Kosovar Asllani, who is not in the squad due to injuries.

The national team captain Peter Gerhardsson lined up with an offensive eleven with, among others, Hanna Bennison and Fridolina Rolfö in the midfield.

Despite an attack-oriented eleven, it was an own goal that decided the match.

Sweden dominated the match from the start with a high ball possession.

After just over 20 minutes, the Swedes called for a penalty when Stina Blackstenius was sent off in the penalty area - but the referee chose to release in that situation.

Sweden were close to putting the equalizer away after 35 minutes as the opposing defense lost control of the ball to Angeldahl in a scuffle towards the left of the goal, but in the end the ball was cleared over the dead ball line.

Instead, the lead goal came just minutes later when Blackstenius' finish took a strong lead and into goal.

Ireland's Louise Quinn was noted for the own goal.

Ireland entered the match in the second period when Sweden lost the initiative.

After 57 minutes, Lina Hurtig got through on the right and was very close to equalizing for the home side, but didn't get the shot away.

The striker was forced to change and she was replaced by Olivia Schough.

Stina Blackstenius then came close to doubling the lead when she fouled off a defender and went on to finish, but the shot was saved by Brosnan in the Irish goal.

Once Ireland came on the offensive, Sweden responded with a good defense and with just over a quarter left, the victory looked certain.

That was also the case.

The win is Sweden's third in the World Cup qualifiers and they now lead the group with their maximum nine points.

CLIP: Gerhardsson about the troupe (October 12)