Juan Bernabé, the eagle trainer expelled by Lazio for making the fascist salute: "I'm from the right, from Vox, but I'm not a fascist"

Juan Bernabé is 53 years old, he is from Cádiz, he trains eagles and accumulates a career worthy of any footballer. He first spent seven years at Benfica, between 2003 and 2010, to ... 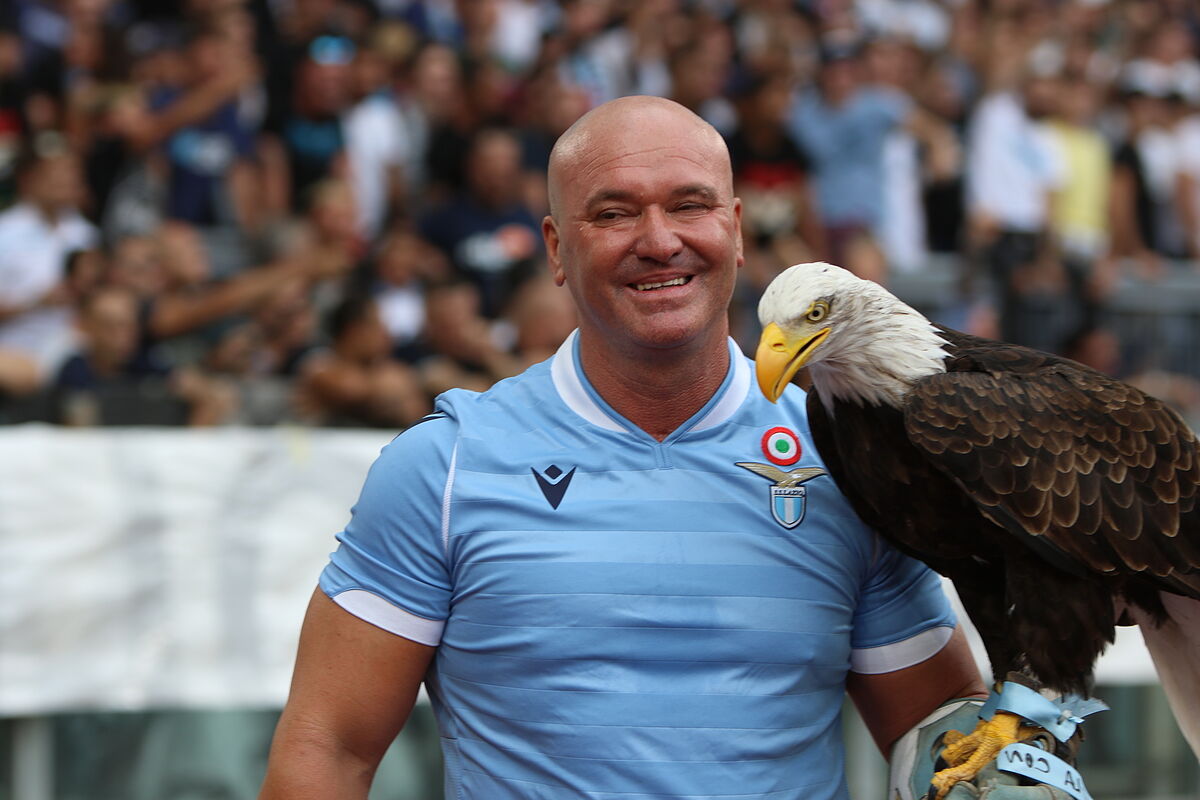 and accumulates a career worthy of any footballer. He first spent seven years at

, and later 'signed' for

after a brief collaboration with

. In both teams he was in charge of training the eagle that represented the club. '

In the Lisbon group, in whose shield said bird reigns (that is why they have the nickname of 'eagles'), it became so famous that it served as a tourist attraction during the

His Canadian eagle flew for years before each match at the

This week, after a decade as part of the Italian team, the relationship between Bernabé and the Roman team has ended.

He has been fired

A video and a gesture

that have made him the star of the day in Italy.

last Saturday. The name by which

. The image of Bernabé, an eagle on his arm, raising his hand has gone around Italy and half of Europe and has been denounced, among others, by the Union of Italian Jewish Communities. "There can be no ambiguity or hesitation.

Out with the fascists

of the world of football," said its president, Noemi Di Segni.

The reaction has been so important that Lazio has been forced to release a statement within hours of the publication of the video, arguing that

Bernabé is not "directly" related to the club

and that he immediately suspended any service that the Spanish could be offering to the entity.

"Bernabé is an unregistered employee of a

", justifies the whole of Rome.

These attitudes offend the club

, the fans and our values."

The ultras of Lazio

They are located in the famous

and they have been the protagonists of many controversies for displaying banners of fascist symbolism.

"It was a military salute"

has tried to contact the Spanish falconer, but Bernabé has preferred to

waiting for the movements that his lawyer may make to deal with his contracts with Lazio. "He says that it has been a

he is not a fascist,

" a person close to the trainer assures this newspaper, who, given the controversy that arose in the transalpine country, gave his only statements to the newspaper '

I'm sorry about what happened,

, but I do not have fascist ideals. In Spain, the fascist salute is made with the arm in a straight line," he added. "I am a man who has traveled the world and who has relationships with people of all races. It was a gesture to celebrate the end of a match,

Bernabé, who also worked at the wedding of the

and became a falconer

, declared in 2012 in an interview in the newspaper AS to be a "born

fly through the Bernabéu

":" There is nothing bigger than Madrid ".

ChampionsA surreal siege and Moldovan flags in a victory for Transnistria: "They shot twice and scored two goals"

ChampionsThe Lisbon torment of Koeman: indicated by defensive, he faced the press and closed training