Dahlén had to celebrate twice

Jonathan Dahlén has never played in the SHL. But San José's 23-year-old knows how to score in the NHL - twice he got the puck in goal when the team drove over Montreal 5-0. If you want to make one premiere goal, you can just as easily make two? 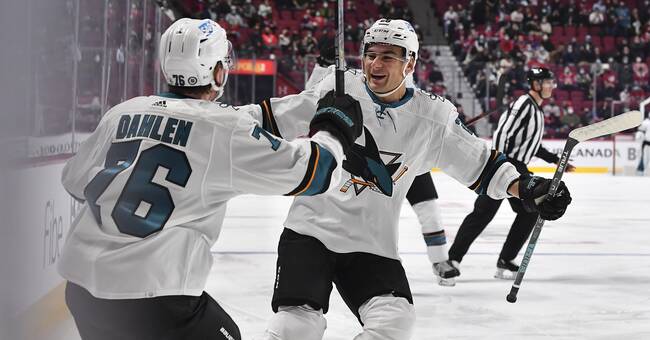 At least that was the opinion of Jonathan Dahlén, who barely four minutes into the second NHL game of his life scored two goals away against Montreal.

At 1-0, Brent Burns shot from the blue line for control, Timo Meier changed the direction of the shot and in front of goal, Dahlén got the club on the puck, which went past an equally obscured as chanceless Jake Allen.

Dahlén's touch was probably not necessary for the puck to go to the finish, and it took several repetitions for the secretariat to see that the Swede with his club was last on the puck.

Second generation in the team

Goal number two, however, there was never any doubt.

Two minutes after 1-0, Dahlén and Logan Coutur came in a two-on-one counterattack and on a return the Swede got an open goal.

With his doubles, he is the club's second Dahlén to celebrate in the San José jersey, his father Ulf Dahlén scored 41 goals in 161 games for the club in the mid-1990s, before Jonathan was even born.

23-year-old Jonathan Dahlén left Sweden and Timrå this summer for games in the NHL, without having played in the SHL.

Before the premiere, he said that everything felt good in Northern California.

- It feels a bit unreal in some way, but good.

I have worked so hard for this, he told Sundsvall Tidning.

Karlsson is the best Swede

Despite his two goals, Dahlén was not even the best Swedish scorer in the match.

Erik Karlsson increased himself to 3-0 just before the first period break and then provided the assist for the last two goals of the match.

The Swedes thus ensured that the team's best scorer last year, Evander Kane, was not missing in this first of the 21 games he was suspended in for violating the NHL's covid-19 rules.

For Montreal, the 0-5 was the team's fourth straight loss, the worst start to the season in 25 years - and less than four months after the team reached the Stanley Cup final this summer.