Weighing ceremony, squabble in social networks and the introduction of a fine of 500 thousand rubles: how Mineev and Ismailov prepared for the battle

Vladimir Mineev and Magomed Ismailov successfully passed the weigh-in ceremony before the fight at the AMC Fight Nights 104 tournament in Sochi, which will take place on October 16. The champion showed 84.4 kg on the scales, while the challenger was 400 grams lighter. According to the Bald Predator, this advantage should not help his opponent in any way. In turn, the native of Sverdlovsk stressed that the opponent "does not breathe for more than two rounds." The organizers tried to do everything to avoid possible fights. AMC Fight Nights President Kamil Hajiyev has imposed a fine of 500 thousand rubles for athletes for entering the "cage" of unauthorized persons. 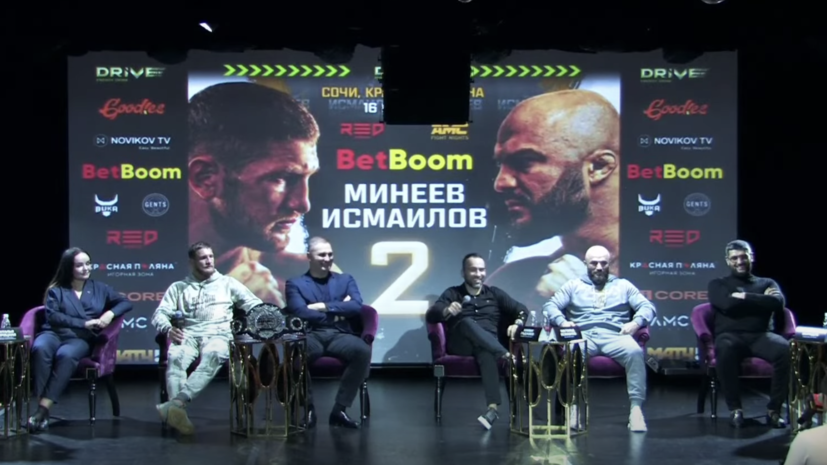 The weigh-in ceremony became one of the most intriguing events on the eve of the duel between Magomed Ismailov and Vladimir Mineev.

Fans of mixed martial arts were waiting with great interest to see if their opponents would meet the limit of the middle weight category - 84 kg.

Both managed to do this.

The bald predator walked right along the edge and showed exactly 84 kg.

At the same time, the Dagestani looked extremely emaciated and, realizing that he had completed the task, smiled tiredly.

His opponent decided to play it safe and climbed on the scales completely naked.

Even without underwear, he pulled 84.4 kg.

The face of the native of Sverdlovsk also showed traces of the hardest weight race.

So, Ismailov, having posted a video from the ceremony, spoke about 400 grams of Mineev's advantage.

“When I lie on it, he will feel that I am 400 grams lighter, but this will not help him in any way,” Magomed wrote on Instagram.

In turn, the AMC Fight Nights champion on Friday went for a walk in the mountains along the Mzymta and from there addressed his opponent.

The 31-year-old athlete urged Ismailov to forget the grievances and wished him well, "no matter how much hatred he boils towards me."

On the 16th you will tell me everything in the "cage".

In any case, you will not be forgotten.

PS Guys, to take offense at someone means not to control oneself, not to understand the situation, or just to be a child, "Mineev noted.

In general, the athletes did not miss any opportunity to pry each other.

For example, Ismailov at a press conference in a half-joking manner did not rule out a showdown outside the "cage".

“What's wrong with that?

What happened to Russia?

Why, when two men of equal strength decide something once on the street, everyone starts: "Ay, oh, what are you doing?"

Where is it from, come to your senses!

Enough, get yourself together a little, ”- quotes the words of the Sport24 fighter.

He also promised to give his opponent revenge if he wins.

“I think it depends on tomorrow's confrontation and what questions will remain.

Whether the third battle will be relevant, we will draw conclusions after the second.

If I win and I have to decide whether to give revenge, I think, of course, I will.

The bottom line is that I will never get tired of hitting him, ”added the Bald Predator.

In turn, Mineev told what conclusions he made after the first fight that took place between them three years ago and ended in a draw.

In his opinion, Magomed "does not breathe for more than two rounds."

“I have already gone through everything once, so let's see what happens tomorrow.

What was missing in the first battle?

And the form was not enough.

Now everything is fine, but on Saturday it will be even better, ”the reigning champion promised.

And the organizers, despite the serious intensity, remain confident that the fight will be limited exclusively to the "cage" and five rounds.

According to the president of AMC Fight Nights Kamil Hajiyev, "now there is everything to conduct a fight in a civilized manner."

“All this has already happened, and everyone took part.

But individually, all are normal people.

I don't think there will be a scuffle.

But they have people in the corner who know each other well.

I don't think they will decide to fight.

Agree, it will be boring if everything is simple, ”the functionary said.

At the same time, he promised to fine Mineev and Ismailov 500 thousand rubles if the members of their teams nevertheless penetrate the "cage", and promised not to allow such a "zoo".

"This is the most important confrontation in Russian MMA"

Not only fans, but also representatives of the domestic MMA community are waiting for the confrontation with great interest. Many consider the challenger to be the favorite. UFC lightweight fighter Islam Makhachev noted that the Bald Predator took the preparation extremely seriously and "attracted different coaches and sparring partners."

“It will turn out to be a competitive and interesting fight ... As I understood, Ismailov is in the best shape for his age.

I think he has more chances.

Moreover, he is able to prove himself in a standing position ... If Magomed fights smartly and does not waste his energy and succumb to emotions, he is able to win every round.

Ismailov only enough for two?

It is not true.

In the last fight, when Magomed knocked Mineev down, he set a strong pace.

Such a feeling, I wanted to break the canvas.

I left all my strength in this finishing.

Therefore, everything went on so hard, "- quotes the words of Makhachev" Championship ".

Supported by a colleague and Alexander Emelianenko, who was defeated by a Dagestani last year.

He also emphasized that Ismailov was better prepared for the fight in Sochi.

“He trains and plows all day.

He drains a hundred sweats at the gym.

Good luck to him in this battle.

Vyacheslav Vasilevsky, recently defeated by Ismailov, also took his side.

Many experts assume that Magomed will take his own on the ground, but he believes that the challenger is no worse than the champion in the standing position, and this makes him a clear favorite.

“If nothing unexpected happens, Ismailov will win.

And, of course, Magi has a huge advantage in the fight, not even discussed.

Today this is the most important confrontation in Russian MMA.

Many are expecting not even a sports fight, but a clash of personalities and characters, ”Vasilevsky emphasized.

But the former Bellator champion Vitaly Minakov found it difficult to name the strongest, however he wished Mineev luck.

“Their previous fight turned out to be very competitive, despite the fact that Magomed dominated in the first two or three rounds.

Obviously, Mineev's impact is an order of magnitude higher.

But given the class of fighters, anything can happen.

Both Volodya and Magomed have enough knockout power.

However, this fight will most likely last the entire distance, ”said the ex-Bellator champion.

Vadim Finkelstein, head of the M-1 Global league, agreed with him and called the confrontation in Sochi "one of the hottest in recent years" in the country.

Ismailov is a fighter, and Mineev is a drummer, the fight can turn in any direction ... Volodya and Maga love to talk very much.

As for the "chemistry", maybe this will help Ismailov if the fight goes into the later rounds.

But, I repeat, Mineev is a very dangerous drummer, sometimes even “chemistry” does not help out, ”the functionary recalled.