Sun Yue announced his retirement! The Chinese men's basketball team has only one player left in the Golden 08 generation

On the 16th, Beijing Enterprises Men's Basketball announced the retirement of 35-year-old veteran Sun Yue. Since then, the 16-year career of "Great Sage" has officially ended.   Seven months ago, when Li Gen was interviewed, he inadvertently recalled the past when he played with Sun Yue, and used the "last year" to express his emotions, which made many people think that Sun Yue's career is abou 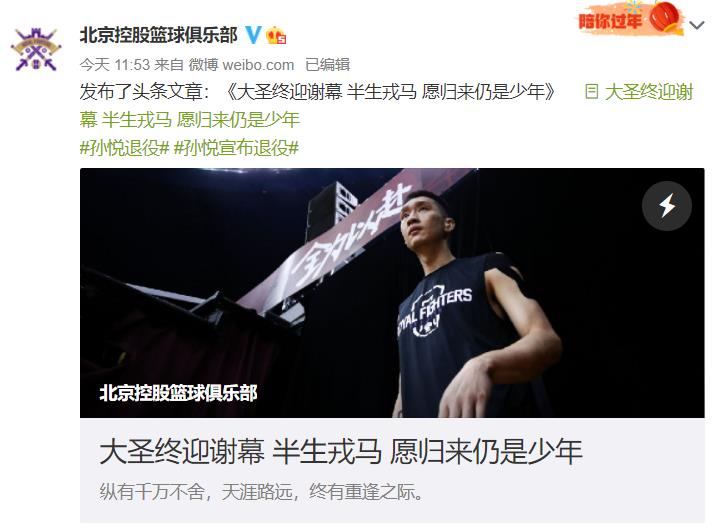 On the 16th, Beijing Enterprises Men's Basketball announced the retirement of 35-year-old veteran Sun Yue. Since then, the 16-year career of "Great Sage" has officially ended.

Seven months ago, when Li Gen was interviewed, he inadvertently recalled the past when he played with Sun Yue, and used the "last year" to express his emotions, which made many people think that Sun Yue's career is about to end.

When there is no Sun Yue in the CBA registration form for the new season, it also seems to further herald the end of the "Great Sage" career.

Although there are various expectations, when the news of the official retirement came, it was still sad.

Sun Yue's career has gone through ups and downs.

In 2000, Sun Yue, who was only 15 years old, entered the Beijing Aoshen basketball team after three months of trial training and began to play in the ABA league.

In 2007, Sun Yue was selected by the Los Angeles Lakers with the 40th overall pick in the second round of the NBA Draft, becoming the fifth Chinese player to join the NBA after Wang Zhizhi, Battelle, Yao Ming and Yi Jianlian. He is also the first in China and Asia. The second defender to join the NBA.

In 2009, Sun Yue won the NBA championship with the team.

In 2013, Sun Yue was loaned to the Beijing Men's Basketball Team.

That year, the Beijing Men's Basketball team signed a contract with Sun Yue for 5 years.

After two years of sinking, Sun Yue switched to the Beijing Enterprises Men's Basketball Team in 2019, which also became the last battle of his career.

After the game, Sun Yue gathered his teammates as usual, put their hands together and shouted "Come on!"

He then turned around, bowed and waved to the audience in the stands.

When facing the fans in the stands shouting his name, looking forward to letting him play for another year, Sun Yue stared into the distance under the spotlight, unable to return to his senses for a long time.

Then he slowly lowered his head and slowly wiped the sweat off his face, recalling everything on the field just now.

In such a game, the data can no longer reflect the value of the king in the game. The strength of not accepting the old and not accepting defeat is the unique temperament possessed by this battle-tested veteran, which shocks people. .

The final battle of the 2020-2021 season has also become the curtain call of the career of Dasheng.

Of course, the deepest memory Sun Yue left to Chinese fans is the midsummer of 2008.

Against the US team, he capped Howard, fought Spain, beat Angola, 4 points narrowly beat Germany, and fought against the strong basketball team Greece, and together with his teammates brought the Chinese men's basketball team to the top eight in the world...

In the Olympics that year, many Chinese basketball fans really got to know Sun Yue.

After Sun Yue retired, only Yi Jianlian was left among the 12 members of the Chinese Men's Basketball 2008 Golden Generation.

In the comment area of ​​Sun Yue’s retirement news, the fans expressed their dismay and nostalgia for that good memory.

"Seeing the news of Sun Yue’s retirement, I suddenly recalled the match between the Chinese men’s basketball team and the United States in the 2008 Olympic Games. No. 9 Sun Yue, No. 5 Liu Wei... And the United Arab dunks Anthony, Chen Jianghua flew past Kobe to the basket, Sun Yue capped Howard... These pictures, the time is still too fast. The big sage finally welcomes the curtain call, half a lifetime Military horse, I hope I will return as a teenager!"

"The last button, tears in my eyes, thank you for leaving me with good memories, and hope everything is well."

"Fortunately, when the national team was brilliant, I watched the Chinese men's basketball game live. The passionate youth of more than ten years ago has passed. Injuries are the natural enemy of athletes. I hope that the future will be smooth and healthy."

"Even if there is a lot of perseverance, the world is far away, and there will be a chance to meet again. The great sage finally welcomes the curtain call, and the rivers and lakes say goodbye. I wish to return as a teenager. Sun Yue! Take care! The Lakers celebrity CBA and NBA double champions are happy to retire!"

Goodbye "Great Sage", I hope you will continue to be wonderful in the second half of your life!