Rosengårdsstjärnan: "Do not want to relive the feelings"

Last year, Rosengård lost the Swedish Championship title in October. This year, the same autumn month can shimmer with gold - already on Sunday, the Malmö club can win the damallsvenskan. - I do not want to relive the feelings from last autumn, says star Sanne Troelsgaard. 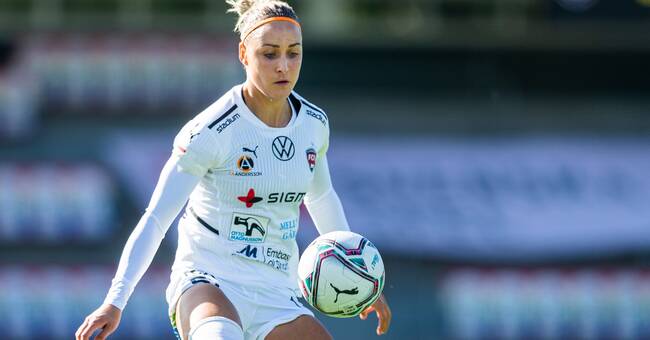 With five points to spare down to table runner-up Häcken - the reigning champion team - and three rounds left to play, the conditions are simple.

If Häcken loses points at home against AIK and Rosengård wins away against Piteå, Crown Princess Victoria's trophy is in port for the Malmö club.

- But we can not think about what happens between Häcken and AIK.

We can only focus on ourselves and winning against Piteå, says Rosengård's Sanne Troelsgaard.

When the month of October approached last year, Rosengård was in the series lead with three points down to Häcken when there were seven rounds left.

Then the Scanians took only three points in four matches and Häcken rushed past.

- There were some matches where we lost everything.

I think we learned to take one match at a time.

We can not think about what will happen in three matches.

I also think it strengthened us mentally, says Troelsgaard.

Häcken did win at home against Rosengård in early October (2-0), but Hisingslaget has since suffered two heavy losses in the Champions League and played a draw against Vittsjö.

AIK is second last in the Allsvenskan - can they take points from Häcken?

- Yes, I think all teams can beat each other.

It depends on what attitude you have.

Now Häcken has had a bit of a hard time, they have played in the Champions League the last two weeks.

It affects them physically as well, says Troelsgaard.

Rosengård are "most champions" on the women's side with their eleven Swedish Championship golds, but during the last five seasons it has been just a series victory (2019).

- I long for a Swedish Championship gold.

You know what feelings you get from it.

Every day you go to work and train, your goal is to really win that Swedish Championship gold, says Troelsgaard.

SVT broadcasts two matches live from damallsvenskan during the weekend.

And is on site in Piteå to guard Rosengård's gold hunt.