For the second game in a row, penalties were required to decide a Vancouver game in the NHL. But where they last lost to Edmonton, the team now managed to win the penalty shootout against Philadelphia. 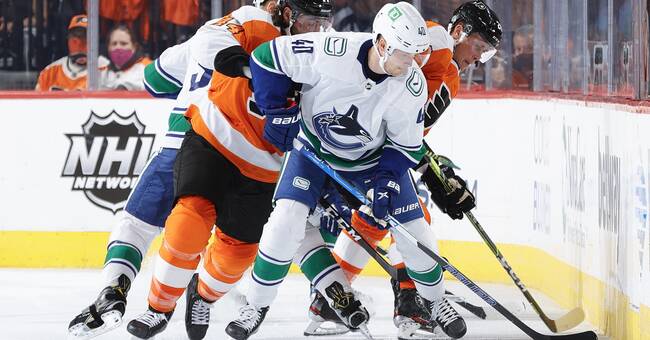 Vancouver's Elias Pettersson scored a goal, an assist and put one of the team's two penalties away against Philadelphia.

It was the team's first US trip since March last year.

Last season, the league was divided into four different "bubbles" to be able to play despite pandemic restrictions, and the Canadian teams stayed on their side of the border.

Although Philadelphia started the scoring and led 1-0 after the first period, Vancouver connected the grip on the game in the second and led 4-2 before the third.

But Philadelphia pulled up and equalized to 4-4 before the signal for regular time sounded.

After a goalless extra time, penalties were needed to separate the teams, and Vancouver took it all home with two penalties, while Philadelphia missed its two.

Vancouver's Oliver Ekman-Larsson is noted for an assist.

The meeting between Chicago and New Jersey was also decided after regular playing time.

Dougie Hamilton, who signed for New Jersey at the end of July, started the shooter after just 17 seconds of play.

It was the fastest premiere goal in the club's history, the previous record being set in 2006, when Zach Parise made it 1-0 after 26 seconds in a meeting with Carolina.

New Jersey led 3-1 when Chicago managed to get into the game again and after 60 minutes of play the score was 3-3.

But in overtime, Chicago was not enough and New Jersey's Jack Hughes poked in 4-3 with just under a minute played.