Payback for rudeness: goals from Djikia and Zhigo helped Spartak win back from the score 0: 2 in the match against Dynamo

"Spartak" and "Dynamo" drew in the match of the 11th round of the RPL. The meeting at the Otkritie Arena ended with a score of 2: 2. The blue and white were confidently leading thanks to the precise strikes of Ivan Ordets and Konstantin Tyukavin, but Rui Vitoria's wards managed to escape defeat in the end. First, Georgy Dzhikia scored after a corner, and four minutes later Samuel Zhigot closed the cross of Alexander Lomovitsky from the flank. The derby was also remembered for the massive brawl on the sideline shortly before the break due to the tough tackle of Arsen Zakharyan. As a result, the referee Sergei Karasev showed the players four yellow cards at once. 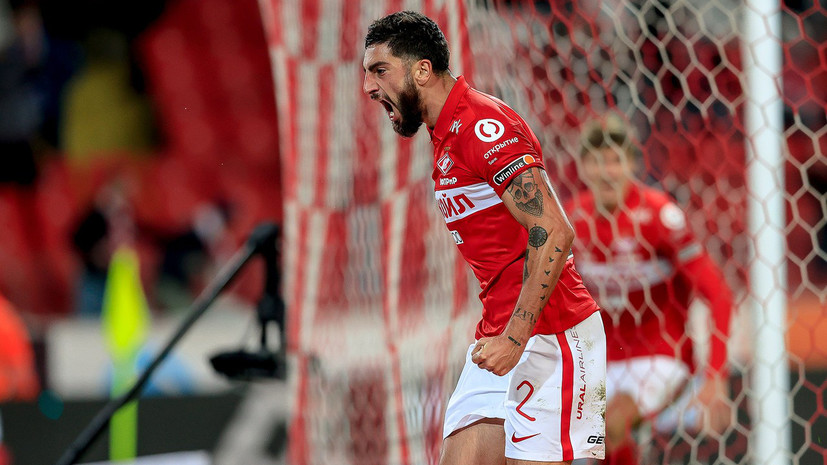 The confrontation between Spartak and Dynamo could be safely called a battle for six points.

The result of the derby was in many ways decisive for both teams.

The second consecutive defeat of Zenit added value to the points.

Thanks to the misfire of Petersburgers in Tula, the blue-and-white, if successful at the Otkritie-Arena, were able to get close to the leader.

In turn, Rui Vitoria's wards had a chance to both catch up with the principal opponent in the standings and, with a successful coincidence of events, even rise to the top three and join the race for gold, and again descend into its second half.

At the same time, both teams approached the game in a suboptimal state. Especially serious losses were suffered by the red and white, who, due to injuries, lost Nail Umyarov, Quincy Promes and Esekiel Ponce, who accompanied another striker Georgiy Melkadze in the infirmary. Dynamo also had some problems. Their main left-back Diego Laxalt definitely could not enter the field. The participation of Denis Makarov in the meeting was also in doubt, who, due to health problems, left the location of the Russian national team ahead of schedule.

As a result, the domestic footballer was not even in the application, and his place on the right flank of the attack was taken by Clinton N'Zhier.

The goalkeeper's position also aroused many questions: will Sandro Schwartz continue to trust the reservist Igor Leshchuk, who has shown himself well, or will he return the restored Anton Shunin to the base.

In the derby, the specialist relied on experience.

Finally, the main central defender Fabian Balbuena missed the game, who just a couple of days ago played a qualifying match for the 2022 World Cup as part of the Paraguay national team.

The place of the legionnaire on the field was taken by Roman Evgeniev.

A couple of young Ruslan Litvinov in the support zone was Roman Zobnin, who had returned to service.

Place Promes on the left edge was taken by Jordan Larsson.

And Alexander Sobolev, alone, positioned himself at the forefront of the attack.

The first half was completely for Dynamo.

Only in the opening of the meeting did the Spartak players have an advantage and tried to carry out their own attacks.

Then they created their only dangerous moment.

Sobolev shot from outside the penalty area into the far corner, but the ball missed the bar a little.

In the future, guests reigned on the field.

It was perfectly clear to everyone that they would turn on their trademark high pressure and try to regain possession in the wrong half of the field as quickly as possible.

This is what happened.

Blue and white, upon loss, immediately entered the selection, competently insuring each other.

In most cases, the pressure led to mistakes and a new wave of offensive by Schwartz's charges.

The owners did not succeed in anything. They got out of the pressure of the opponent with great difficulty. Often the defenders of the team found themselves locked in the corners of the field and from there they simply carried the ball closer to the center. Sobolev was on duty alone in front, completely cut off from his partners. Larsson tried to accelerate on the right flank, but he was closely watched by both Dmitry Skopintsev and Ivan Ordets. Zelimkhan Bakaev was also invisible on the opposite edge. In addition, Dynamo retained most of the rebounds. Zobnin and Litvinov together could not cope with the troika Daniil Fomin - Nikola Moro - Sebastian Shimanski.

Dynamo's goal in the middle of the first half turned out to be absolutely logical.

The success of the team was brought about by the successful play of the set piece.

After filing the corner, Ordets cut the ball under the far post from almost zero angle.

Alexander Maksimenko in this situation was clearly late with the exit, and the short Litvinov was unable to restrain the Ukrainian.

Only by conceding, the Spartak team briefly seized the advantage.

However, they still did not get to someone else's penalty area, although they struck eight hits, none of which hit the target.

But shortly before the break, emotions on the field were heated to the limit. It all started with a rough tackle by Arsen Zakharyan under Maximiliano Kofrie on the flank. Samuel Gigot immediately stood up for the Belgian. Vyacheslav Grulev came to the aid of the partner and pushed the opponent aside. Then a scuffle began on the edge. Dzhikia grappled with Fomin, and Sobolev almost met in hand-to-hand combat with Leshchuk. With great difficulty, the referees' team managed to prevent a massive brawl. And Sergey Karasev showed yellows to Zakharyan, Grulev, Zhigo and Dzhikia. For Samuel, she became the fourth in the current RPL season, and he will miss the match of the 12th round with Zenit.

However, the shake-up did not help Spartak much.

In the second half, the hosts continued to possess the ball, but still found themselves unable to reach someone else's penalty area and create at least some semblance of a moment.

Serves from the flanks also did not give anything, since Ordets and Evgeniev confidently removed all the riding balls.

Dynamo responded by catching their opponents on counterattacks.

Schwarz's wards gladly burst into the free zones in someone else's half.

The German himself prudently removed from the game during the break the instituted N'Zhie, who received a yellow card for hitting Djikia's legs.

Instead, Grulev moved to the right flank, and 19-year-old Konstantin Tyukavin was at the forefront.

And with this castling, the coach guessed completely, because at the end of the hour of the meeting, the striker of the Russian youth team seemed to have put an end to the derby. After Fomin's excellent cutting pass between Kofrie and Gigot, the forward broke away from Djikia and outplayed Maksimenko, who jumped out to intercept. The VAR judges reviewed the episode for an offside position, but ruled that Tyukavin was in line with the defender.

So Spartak found itself in an almost hopeless situation.

In the absence of Promes and Ponce, the red and white did not succeed ahead.

And there was no one to strengthen Vitoria's attack.

Nevertheless, the Portuguese tried to find a way out.

He removed Ayrton and Zobnin from the field and threw Alexander Lomovitsky and Mikhail Ignatov into battle.

In many ways, it was a risk, since the latter came out as a "ten", and the hosts exposed the support zone, but they had nothing to lose.

The red and white, at least, managed to lock the opponent in the opponent's half of the field.

However, in general, Dynamo defended calmly and in the end could even bring the score to a large one.

Tyukavin, after the transfer of Sylvester Igbun, went one-on-one with Maksimenko, but did not make it into the near top nine.

There was absolutely no sign that Spartak would be able to escape, but it happened. Probably, somewhere young guests relaxed, who considered that the game was already done. To the credit of the owners, they did not give up to the end and showed character. He gave hope to the Jikia team. After giving the corner and a great discount from Sobolev, Georgy sent the shell into the near corner from close range. Thus, the footballer scored the second goal in a week, taking into account the effective blow in the match with Slovenia.

Having narrowed the gap, the red-and-white went to bulk, and not only Djikia, but also Zhigo went to someone else's penalty area.

And it bore fruit in the time added by the referee.

Lomovitskiy made a cross from the left flank, and the Frenchman, ahead of his opponent, cut the ball with his head under the far post - 2: 2.

Vitoria's wards, finding themselves in a hopeless situation, managed to escape.

And for one point scored in the derby, the partners should thank their defenders.

Dynamo, on the other hand, managed to lose points out of the blue and failed to reduce the gap from the leading Zenit to one point.

Moreover, the team was left without a victory in the second round of the RPL in a row.