Russian hockey player Vasily Podkolzin scored the first goal in the NHL. The 20-year-old Vancouver striker distinguished himself in an away game against Philadelphia and helped to win, while spending just over seven minutes on the ice. He became the fifth domestic player to score a goal this season. 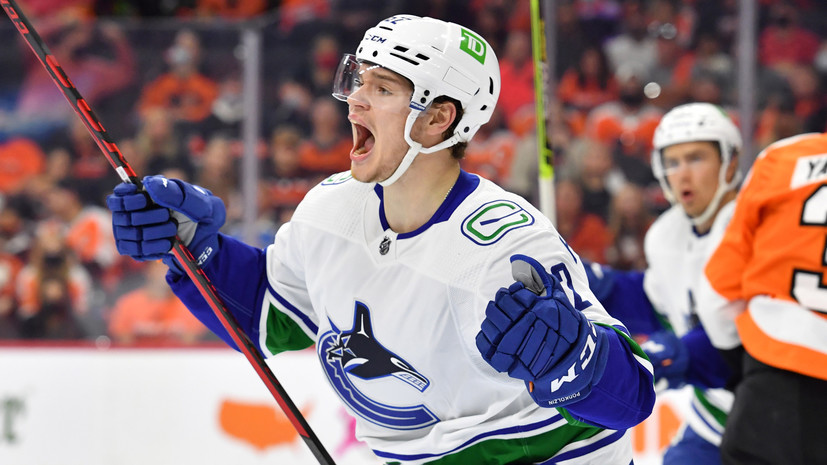 There has been a new addition to the list of Russian hockey players who have scored in the National Hockey League.

Former captain of the youth team Vasily Podkolzin scored the first goal in his overseas career.

The Vancouver Canucks forward hit the Philadelphia Flyers' goal in the regular season and helped his team win.

Two days earlier, Podkolin made his debut in the "Vancouver", and then with effective actions he failed to distinguish himself. In the away game with the Edmonton Oilers, the Russian came out in the fourth link and spent a little less than eight minutes on the ice. During this time, he managed to inflict one throw, which was blocked by the opponent's goalkeeper. Podkolzin himself appreciated his debut well, even if the team lost in shootouts with a score of 2: 3.

“Very cool emotions! Great deal for me and my family. An unforgettable experience. I thought I was going to be nervous. But everything went fine. I went out and played as much as they gave. Despite the score, everything worked out great. They handed me the protocol of the match as a keepsake. Now I will hang it at home in a frame. I tried to go more to the gate. To score a goal is useful to play for the team. Probably, in the opening I didn't have many chances. But it's okay. And it's a great thrill to play with everyone here. You get unreal pleasure even from one minute on the ice, ”Podkolzin admired.

The next match gave the striker more reasons to rejoice.

Vancouver came to visit Philadelphia as they kicked off the new season.

Podkolzin was transferred to the second three to Elias Petterson and J.T. Miller, with whom he had already practiced in his debut meeting.

Together they played the first period, but neither they nor anyone else from Vancouver did not distinguish themselves, and the account was opened by Joel Farabi, whose assistant was the defender of Philadelphia Ivan Provorov.

But after a break and returning to the fourth link, Podkolzin attracted attention.

He connected to the attack, accelerated to the right, approached the goal and threw from the center of the throw-in circle.

The puck flew over the shoulder of goalkeeper Carten Hart.

Podkolzin reacted to his first goal with a loud cry and did not stop talking, even when his teammates surrounded him with congratulations.

This goal really inspired Vancouver, and within seven minutes the Canadian team led with a score of 3: 1, and then brought the match to a shootout victory.

True, Podkolzin practically did not help his partners.

After his goal, he went out on the ice in only two shifts, and spent the entire third period on the bench at all, eventually playing the least of all in the team.

At that moment, "Vancouver" needed to play by the score, with which experienced hockey players would have coped better.

Nevertheless, Podkolzin made his contribution and became the third Russian player of the Canucks, who needed two goals for their debut goal.

He kept the abandoned puck as a keepsake.

A night to remember.

After the match, Vancouver head coach Travis Green not only congratulated the ward on his debut goal, but also said that he had foreseen his success.

“I am very happy for him, the young guy scored his first goal in the NHL.

This morning we joked with Podkolzin.

And I told him that I have a premonition that today he will abandon one.

And in the end it was nice to see it.

This is a truly special moment.

This is not forgotten.

Everyone on the team is happy for him.

The first goal is always an event, you have dreamed about it since childhood, ”said Green.

I was glad for the link partner and Petterson.

He said that the first goal in the NHL for all players becomes a special event in their careers.

“I was so happy for Podkolzin.

I remembered the joy I had in 2018 when I scored my first goal in the NHL.

As if something exploded inside me.

He worked so hard, he's a great teammate, he always comes to training with a smile on his face.

And I am incredibly happy that he scored his first goal, ”the Swede congratulated Podkolzin.

So far, only five Russians have managed to score goals this season.

In addition to Podkolzin, these are Alexander Ovechkin, Andrey Svechnikov, Vladislav Namestnikov and Nikita Kucherov.

Of these, only the 20-year-old Vancouver hockey player spends his first season in the NHL and has practically no such experience.