Karolin Ohlsson did the impossible - Tove said: "It's so fucking good"

Karolin Ohlsson won the city sprint at the Swedish Championships in Norrtälje. In second place came orienteering queen Tove Alexandersson. Then all the emotions released at once. - It's not easy to beat that bride. If you do that then you're damn cruel to me. Today I was damn best, says Ohlsson to SVT Sport. 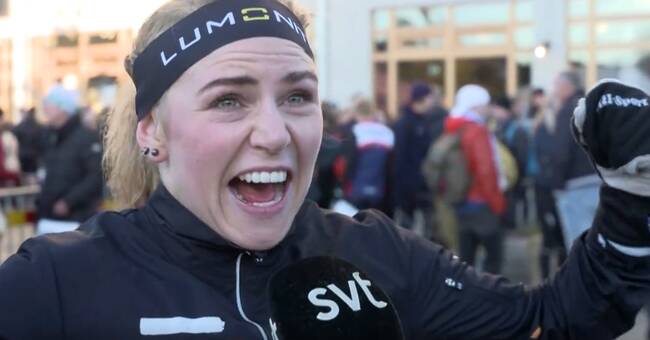 They followed each other in the narrow alleys, but just before the finish line Ohlsson had gained a lead of 20 seconds despite a miss, a distance that remained above the finish line.

When the victory was a fact, Ohlsson beamed and roared out his victory.

There was no one on site who could miss that she won the competition and beat "impossible" Alexandersson who recently secured her seventh straight victory in the World Cup and this summer became historic by running home all five golds at a World Cup.

Won despite miss at the end

I can be a little piggy and just shout "aaaahhhh" and scream when Tove reaches the finish line.

It's not easy to beat that bride.

If you do that then you're damn cruel to me.

Today I was damn best, says a bubbling Ohlsson.

- It was a really cool city with small alleys "old style".

I ran really well until the end when I missed an entrance and then I was one hundred percent sure that Tove would win and she did not and it is so damn good, the constantly smiling Ohlsson continues.

Those who indulged in a duel between Alexandersson and third in the World Cup, 19-year-old Hanna Lundberg, were snorted.

The Luleå runner instead won the junior class by 50 seconds.