Hekkensluiter PEC defends the lead at PSV after the break

Hello and welcome to the live blog of the Eredivisie. My name is Menno Waebeke and I will keep you informed about today's five matches. Have fun! Ninth round  Results: Feyenoord-RKC Waalwijk 2-2 sc Heerenveen-Ajax 0-2 Go Ahead Eagles-Heracles Almelo 4-2 LIVE: PSV-PEC Zwolle 0-1 Fortuna Sittard-SC Cambuur 0-0 PSV-PEC · in 2 days 46 'They have also started the second half in Eindhoven. Can PSV 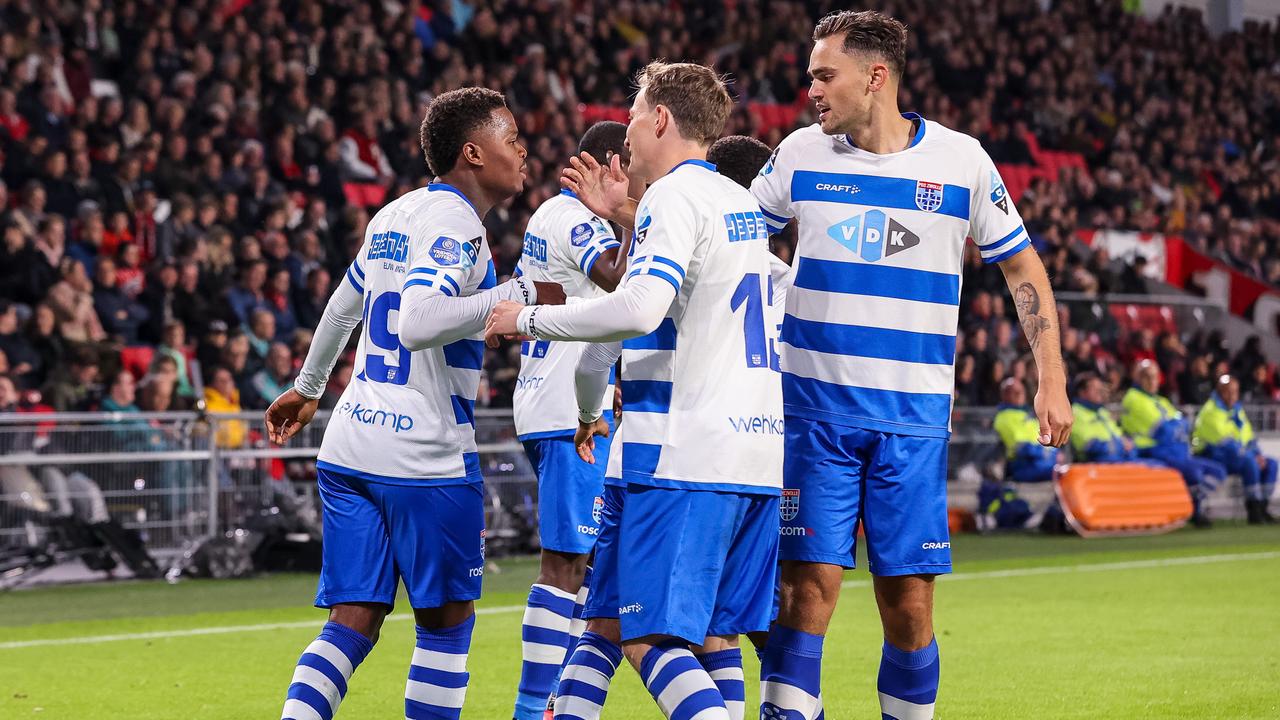 46 'They have also started the second half in Eindhoven.

Can PSV score in the second half?

46 'The ball rolls again in Sittard.

Let's hope the second half is more spectacular than the first.

Nothing really happened in the first half and so both teams go to rest with 0-0.

Flemming was the closest, but his shot could hardly be called dangerous either.

PEC Zwolle is halfway ahead in Eindhoven and that can be seen as a small miracle.

The visitors took the lead via Redan who scored his second goal of the season.

It was only the third goal of PEC Zwolle this season.

After the opening goal, PSV was very close to the equalizer a number of times, but the crossbar and Kostas Lamprou were always in the way of the Eindhoven team.

And this rescue is a lot prettier!

Gakpo hits hard, but the Greek goalkeeper taps the ball just below the bar.

First Boscagli lashes out, but the Greek goalkeeper reacts well.

A few seconds later, Lamprou is in the way again when Zahavi tries.

The wing attacker rounds three men and is eventually stopped by Strieder.

PSV screams for a penalty, but Kooij waves it away.

In this phase, the home team does not get any further than some harmless long shots from Sangaré, Van Ginkel and Gakpo.

31 'The first shot on target in the poor opening phase is for Fortuna Sittard.

Flemming lashes out, but Stevens can save the ball very easily.

The Orange international gets the ball in front of his right and shoots the ball right over Kostas Lamprou's goal.

The ball really does not want to go in for PSV.

Now it is Zahavi who shoots a cross from Madueke to the bottom of the bar.

PEC Zwolle has so far had an angel on their shoulder.

Daishawn Redan scored this week for the Dutch Juniors against Wales and now also makes his second goal in the Eredivisie for PEC Zwolle.

14 'The equalizer cannot be delayed for very long.

PSV has a chance at a chance, but the ball does not want to fall well for the Eindhoven residents for the time being.

A wonderful attack leads via Götze to a scrimmage in the goal mouth of PEC Zwolle.

The ball eventually does not go in via Zahavi, Huiberts and Kersten.

Van Ginkel serves Zahavi, but the striker slides the ball a meter wide of Lamprou's goal.

7 'There is also the next opportunity for PEC Zwolle.

Adzic lashes out, but the ball goes over the back line via Boscagli.

PEC Zwolle escaped Zahavi's 1-0 and scored the opening goal in the counterstroke.

Lamprou kicks far out and the ball ends up in front of Redan's feet, who skilfully shoots the 0-1 in.

We started this Saturday's two desserts in the Eredivisie in Eindhoven and Sittard!

At Fortuna Sittard, Mats Seuntjens is the man in shape.

The attacker has scored in the past two competition matches for the Limburgers.

At SC Cambuur, star Bangura is missing with a suspension, the left back is replaced by Sambissa.

PEC Zwolle coach Art Langeler has opted for a five-man defense against PSV.

In the striker, Adzic and Jong Oranje international Redan must provide the goals.

Go Ahead Eagles drags a victory out of the fire with nine men against Heracles Almelo.

The home team took a comfortable 3-1 lead in the second half, but made it exciting with a second blunder from Hahn and the red cards from Botos and Lidberg.

In the end, Go Ahead holds out and even manages to make it 4-2 in the last seconds via substitute Deijl.

The three points remain in Deventer.

It's over in Deventer!

Heracles chases the lead, but in the counter, Go Ahead ends the game.

Deijl gets the ball perfectly from Heijl and can easily push in the 4-2.

The home team will win today!

94 'We are now in extra time, which is no less than nine minutes.

Heracles chases the equalizer against the nine men of Go Ahead Eagles.

Ajax eventually wins 0-2 against Heerenveen in a mediocre match.

The team from Amsterdam took the lead in the first half via Haller.

In the second half, Heerenveen was very close to the equalizer a number of times, but the ball did not fall well.

In the 75th minute, substitute David Neres decides the game with a header after a nice assist from Tadic.

92 'Sturdy intervention by Sven van Beek, who receives the yellow card from Danny Makkelie for this.

The defender catches Timber hard with his shoulder.

89 'There was almost the connection goal from Heerenveen!

His shot is blocked.

Taylor and Daramy get some more minutes from Erik ten Hag.

They come into the field for Gravenberch and Tadic.

85 'Referee Martens is called to the side for a second time by video referee Mulder.

And for the second time, that results in a

for Go Ahead Eagles.

He can also take a shower early.

Go Ahead Eagles must defend the lead with nine men.

David Neres heads the 0-2 against the ropes.

The Brazilian seems to end the game with this.

80' Double substitution on the side of Heerenveen.

77 'Ajax will change again after the second goal.

This match is over for Mazraoui, the right back is replaced by Rensch.

Ajax almost missed the goal of Heerenveen in the second half, but is suddenly 0-2.

Tadic puts the ball in front of Neres, who provides himself with a great running action.

The Brazilian can then head in freely.

The midfielder of Go Ahead Eagles kicks Fadiga down from behind and is allowed to take a shower.

61 'Heerenveen is increasingly getting the feeling that there is something to be gained against this Ajax.

Both teams will switch.

With the Frisians, Nygren has joined the squad for Van der Heide.

Kudus and Berghuis leave the field at Ajax, they are relieved by Martínez and Neres.

The goalkeeper goes under a corner and then Rente shoots the ball into the goal via the same Hahn.

Great attack from the home side.

Córdoba passes the ball well to Brouwers, who takes the pass well and then finishes it off perfectly.

The margin is now two for Go Ahead!

The defender heads the ball on the crossbar, Ajax escapes there!

A chaotic goal for the Eagles.

Brouwer goes to the ground and takes goalkeeper Blaswich with him.

The ball eventually lands at Córdoba's feet, who hurls the ball in front of an empty goal.

The pass is eventually run into the own goal by Mats Knoester.

The video umpire reviews the entire situation, but sees no violation.

Go Ahead leads in Deventer!

Madueke and Gakpo are both fit enough to kick off.

The latter left the Dutch national team with a head injury, but it turned out not to be too bad.

55 'The first yellow card of this match is for Madsen.

The midfielder is hanging on the shirt of Kudus.

Heerenveen is the better team in this phase of the match.

The central defender has plenty of space, but doesn't hit the ball well enough into the corner.

Pasveer just gets a hand against it.

50 'Another chance for Musaba who is constantly in control at Blind speed.

The wing attacker cuts to his left and lashes out at Pasveer's fists.