Degerfors won the must-win match against Halmstad with 2-1 and sends IFK Gothenburg down below the qualifying line before Sunday's bottom meeting against Örebro SK. 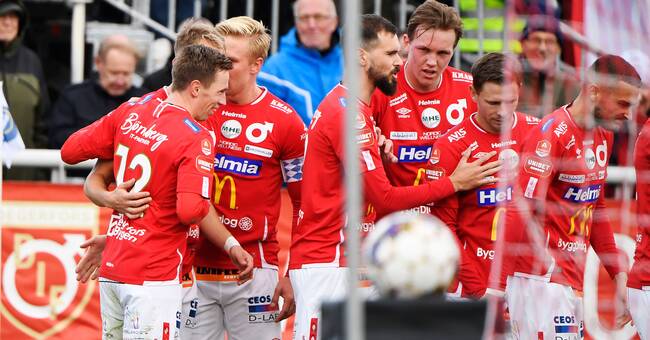 Several certainly expected a goalless match between two crisis teams in a situation where each point can make a difference in the Allsvenskan final stage.

But Degerfors and Halmstad offered an entertaining and chance-rich match, which had one winner - but two losers.

Degerfors won 2-1 and changes places with Blåvitt, which is now below the qualifying line.

The main role in front of the large audience at Stora Valla was played by Villiam Dahlström.

The Gotlander has mostly had to sit on the bench in Degerfors and started his only second match in his career when both Victor Edvardsen and Nikola Djurdjic were missing.

But now he ended up directly in the center of events.

It was Dahlström who was sent off with the goalkeeper in the beginning of the match, which meant that Johan Bertilsson could give the home team the lead on penalties after only six minutes.

And it was Dahlström who forced in the winning goal after half an hour of play, possibly with the help of an opponent.

- We needed to score goals and it was very nice when it sat there, Dahlström said to Discovery during the break and added:

- It is clear that it is very nice to score goals when you get to play.

If you do not, it is difficult to say anything about it.

Now Degerfors goes from 14th place past both IFK Gothenburg, Halmstad and Mjällby, to eleventh, with two points down to IFK Gothenburg before Sunday's match between Blåvitt and Örebro SK, which will be extra important.

IFK Gothenburg has 22 points and Örebro 16. A victory for the Norwegians gives them a lifeline in the hunt to avoid relegation, a loss can be fatal.

For Halmstad, the loss was the seventh match in a row without a win and the club is also involved in the relegation battle.