Al-Wahda exited the AFC Champions League from the quarter-final stage after losing to Al-Nasr Saudi Arabia, 5-1, in the match that took place between them yesterday, at Marsool Park Stadium in Riyadh, in front of more than 24,000 spectators. "7", to end 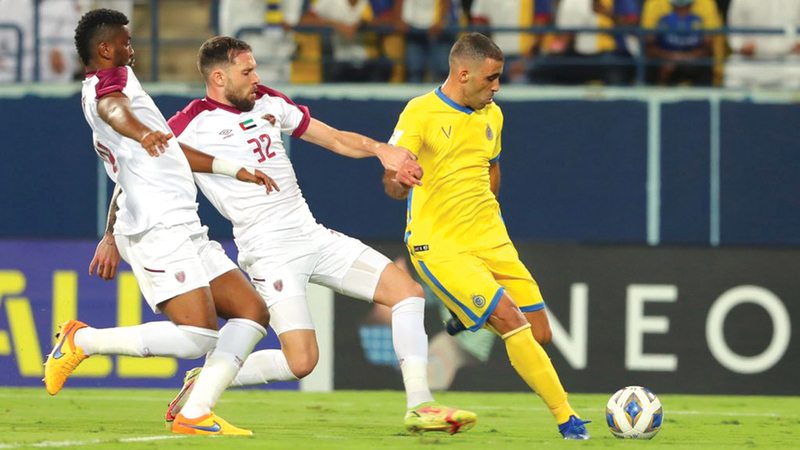 Banished from the AFC Champions League against Al-Nasr Saudi Arabia

Al-Wahda was eliminated from the AFC Champions League from the quarter-final stage after its big loss to Al-Nasr Saudi Arabia, 5-1, in the match that took place between them yesterday, at Mursool Park Stadium in Riyadh, in front of more than 24 thousand spectators.

Al-Nasr advanced with an early goal through Moroccan Abdel Razek Hamdallah, “7”, to end the first half with that result, then Uzbek Jalal Al-Din Mashariyov added the second and fourth goals “52 and 65”, and Abdel Fattah Asiri scored a goal “55”, then Sami Al-Naji concluded the world’s goals. 75”, while Ismail Matar scored the goal of “90 + 3”.

Al-Wahda entered the match in a state of confusion, which was evident on its players, who were affected by the crowd attendance and loud enthusiasm in the stands. The Moroccan player finished it with a tight shot to the right of Mohamed Al Shamsi.

Al-Wahda’s attempts continued in the second half and entered with a clear advantage, but the defensive errors remained a matter of great concern, and from one of them, Abdel Razek Hamdallah penetrated from the left side and hit a strong ball that had Muhammad Al Shamsi on the lookout “51”.

However, Jalaluddin Mashariyov, with a single effort, managed to increase the suffering of Al-Wahda and scored the second goal with a precise shot that deceived the goalkeeper and dwelt on his left.

Al-Wahda collapsed after the second goal to receive another goal due to an individual effort by Hamdallah, who dribbled around three of Annabi's defenders and distributed a cross that Abdel Fattah Asiri did not find difficult to deposit the wide open goal.

Al-Wahda lived its most difficult period with the match, amid the astonishment of its Dutch coach Tin Kat, who did not intervene from the lines to save his team, to continue the glow of victory, who added the fourth goal of a new lapse in the heart of the defense.

Sami Al-Najei was also on a date with a visit to the Al-Wahda window, from a follow-up to Walid Abdullah's ball, which was inhabited by the goal in the usual absence of defenders.

And in the calculated time instead of lost, Ismail Matar managed to score a goal of honor for Al-Wahda from the industry of Mahmoud Khamis.