Chinese warning: the main rivals of the Russians in pair skating won the first tournament of the season

Chinese couple Sui Wenjing and Han Cong won their first tournament of the Asian Open Trophy season. The current vice-champions of the world scored 223.48 points in total, which is slightly worse than the results that Russian figure skaters showed at other tournaments. At the same time, the hosts of the future Olympics received the best short program score among all duos this season. 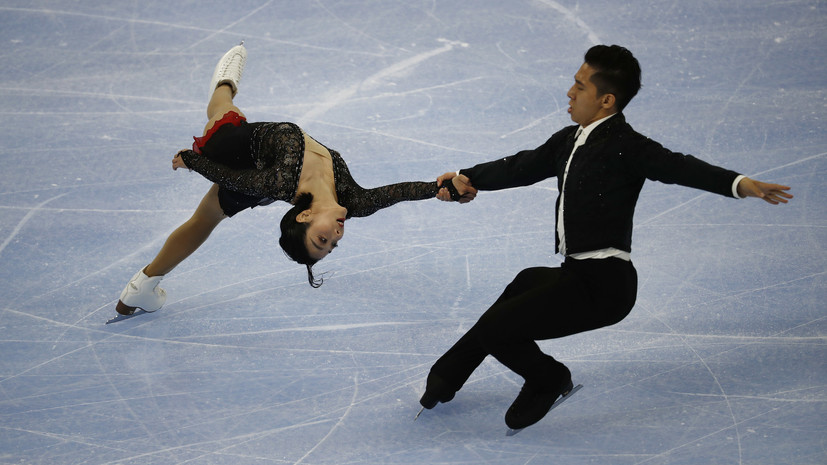 The favorites of the upcoming figure skating competition at the Beijing Winter Olympics are slowly entering the new season. Singles Kamila Valieva and Elizaveta Tuktamysheva, ice dancers Gabriela Papadakis and Guillaume Sizeron, and many other athletes showed their new programs and current form. On the eve they were joined by the main rivals of Russian sports pairs - the Chinese Sui Wenjing and Han Tsun.

The current vice-world champions and silver medalists of the last Olympics in Pyeongchang chose the Asian Open Trophy home tournament as the first start of the season. It was held at the Beijing Capital Sports Palace, where Olympic medals will be awarded in four months. Sui and Han were a priori the main stars of the competition of sports couples - besides them, only three more Chinese duos went out on the ice, which are not included in the category of the leading representatives of their discipline.

Briefly summing up the results of the tournament, we can state that by the beginning of the season the skaters from the Celestial Empire had prepared quite well and could already successfully compete with Russian pairs.

This was vividly confirmed by at least a performance in a short program, for which the two-time world champions chose as an accompaniment the soundtrack to the film Mission Impossible 2, directed by a native of China, John Wu.

The latter was even recognized by the judges as almost ideal - half of the brigade rated him with the highest score, the other half gave him a “four”.

For the release, the Chinese received 7.69 points - except for the Chinese themselves, only Alexandra Boykova and Dmitry Kozlovsky could once earn more at the victorious European Championship.

The twisting and spinning also did not raise questions, but by the end of the program the judges still began to find fault with Sui and Hanyu. For the sequence of steps they got the third level of difficulty, and for the todes they got the second. Because of this, the basic cost of the program decreased by 1.4 points and turned out to be not as high as the world champions Anastasia Mishina and Alexander Gallyamov or Vladimir Morozov and Evgenia Tarasova have already demonstrated this season. But according to the final technical assessment and components, Sui and Han were ahead of the Russian pairs. They scored 79.27 points, and this became the best indicator of the current year for short programs.

For the free program, the Chinese duo took the song Bridge Over Troubled Water familiar to their fans - with which he won the World Championships in 2017. This rental also turned out to be almost close to ideal. Of the notable mistakes were only Han's hitch on the triple salchow and Sui's hand touch while performing his signature throw.

However, he lacked the complexity that Russian couples are trying to support this season. As a cascade, Sui and Han chose a fairly straightforward combination of triple and double sheepskin coats, although at the last World Championships they tried to perform three jumps at once. It is this version of the cascade that Tarasova and Morozov are trying to show, while Mishina and Galliamov succeed in making almost twice as valuable triple salchows. Also, Sui and Han continue to show salchow as the second shot, although the Russians have long mastered the more expensive lutz and rittberger.

The components of the Chinese pair were also left without a solid bonus in relation to their future rivals at the Olympics. For the free program, they scored 144.21 points. This is worse than their own world record, and the result at the last championship of the planet, and the performance of the Russians this season. Mishina and Galliamov received 153.37 points at the Finlandia Trophy for their second rental, and Tarasova and Morozov - 151.66 points at the August Cranberry Cup. This advantage allows both couples to lead in the correspondence rivalry and on the sum of two marks.

So far, it is too early to unequivocally judge the readiness of all participants in the Olympic doubles tournament, especially since the Chinese and Russian figure skaters never met face to face.

But it is clear that Sui and Han can still improve in baseline assessment and execution, and the factor of the home Olympics, which will be attended only by their own fans, could have a beneficial effect on the results.

At the same time, one should not forget that the premiere of another strong Russian couple, Boykova and Kozlovsky, has not yet taken place, which may have its own surprises for rivals from China.