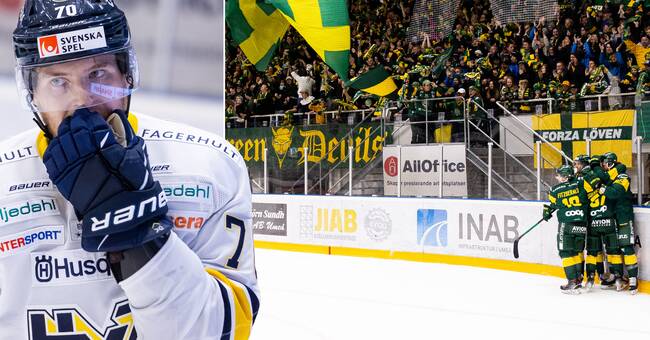 Before tonight's match, HV71 had taken all 18 points they replayed during the six initial hockey Allsvenskan rounds.

On these, the Hv team had conceded nine goals in total.

But when they played away against Björklöven on Friday night, came the season's first loss - and more than a handful of goals conceded.

Already in the first period, the Umeå team climbed up to a 2-0 lead after goals from Gerry Fitzgerald and Ryan Gropp.

When the goals continued to fall into the second period, Björklöven had gone up to 4-1 after 40 minutes.

The goals in the second period came from Axel Ottosson who put 3-0 and Alex Hutchings who scored 4-1 from close range after Jonathan Wikström had reduced in between.

HV71 gave it a proper try to make match of this in the beginning of third.

Taylo Matson reduced to 4-2 and the Jönköping team had more to offer before Sebastian Selin ended a counterattack until 5-2 halfway into the period.

For Björklöven's part, this was a nice revenge after the defeat last against bottom-tipped Troja / Ljungby.

Then it was an unexpected loss with 1-4.

A loss that HV71 had to blame for.

The victory means that Björklöven hooks on HV71 at the top of the hockey allsvenska table.

Next, Vita Hästan is waiting for away ice for "Löven" while HV71 is visited by Södertälje.