Jumbon Djurgården has the most deserving SHL coach of all time in the box. During the 1990s, Barry Smith reaped great success alongside Scotty Bowman, who is considered by many to be the best coach in NHL history. - We still talk a lot and I wish that he would be here and could help me now, says Smith with a laugh to SVT Sport. 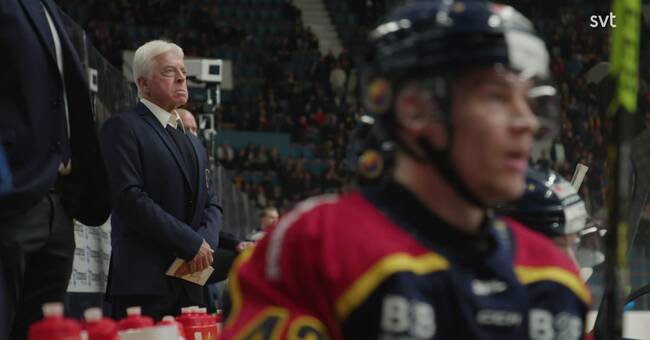 Merited Smith has had varying assignments over a total of 32 seasons in the NHL.

Among other things, he has won five Stanley Cups as an assistant coach.

He has worked closely with the legendary Scotty Bowman who has nine Stanley Cup rings and the most victories of any coach in NHL history.

- Working with Scotty in Pittsburgh, Detroit and Chicago has been a godsend.

He is probably the best coach in hockey history.

His enthusiasm and ability to adapt from one decade to the next and work with players is unbelievable.

He has been a really good mentor for me, says Smith.

Who is the best player you have coached?

- I have had names like Lemieux, Yzerman, Chelios, Lidström ... all fantastic players but in different ways.

I can probably not say a single player, but maybe a single team.

When we had "The Russian Five" was a very fun time.

And in 2002 we had eight or nine Hall of Famers, it was also a great experience.

- Working with a superstar like Wayne Gretzky as a coaching colleague for two seasons in Arizona was also a special experience.

"Age is just a parameter"

At 69, he is the oldest coach in the SHL, but Smith emphasizes the importance of constantly learning new things.

For the past ten years, he has primarily worked with player development in Chicago's organization.

- It was a difficult decision to leave Chicago.

This was a different challenge to step back into the coach booth and that may be why it went a little sluggish for me in the beginning.

I'm starting to get into it again, but I have to admit it's been tough.

Some reacted to Djurgården recruiting a coach your age, what do you say to them?

- Then I would say that age is just a parameter, but that it is also about knowledge, enthusiasm, energy and ability to be able to give the iron 24 hours a day.

Anxiety match away against Timrå

Most champions Djurgården - who have 16 Swedish Championship golds - are currently in the middle of their worst season start since the SHL, or then elite series, started in 1975.

Barry Smith is questioned after seven straight losses and tomorrow, Saturday, the Stockholmers play away against second-placed Timrå.

Most deserving coach in SHL's history - but also questioned