For the first time this season, Jordyn Huitema got the chance to start at PSG. Then the Canadian thanked for scoring a hat trick in the first half. 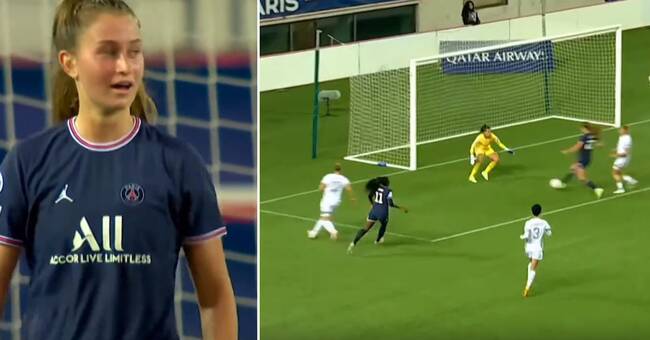 The Swedish national team defender played from the start when PSG, in front of a small but loud home heel, received Kharkiv from Ukraine in the second round.

And the audience probably thought they would get goal cheers in the 17th minute of the match.

A long ball from the back line reached Kadidiatou Diani who passed the last defender and came free against the goalkeeper.

But Gamze Yaman rushed out unscathed - and saved the shot with his face.

Instead, the goals came - and cheers - a few minutes later.

And it was especially a name Paris fans had reason to chant.

The Canadian hit with a hat trick

Jordyn Huitema, who won Olympic gold with Canada in Tokyo this summer, struck with a hat trick in the first half.

First, she got a ball in the depth on the left edge, got into the penalty area and shot in 1-0 at the nearest post.

A few minutes later, she nodded in the return from Ramona Bachmann's rib shot.

And 3-0 came just before the break.

The 20-year-old, who made his first match from the start this season, got a perfect slanted inward pass from Diani and easily hit his hat trick.

Bomqvist jumped in for Wolfsburg

Tabea Wassmuth, who scored two goals against Chelsea in the last round, struck with two more goals tonight.

Swedish striker Rebecka Blomqvist was substituted in the 76th minute.