The fans demand the departure of the coach, describing him as “technically bankrupt”

The UAE fans left Zabeel Stadium in Al-Wasl Club, angry at the national football team's 2-2 draw with its Iraqi guest, with only one point, to raise the tally of its points to three of the four matches it has played so far in the decisive round of the Asian qualifiers for the 2022 World Cup. 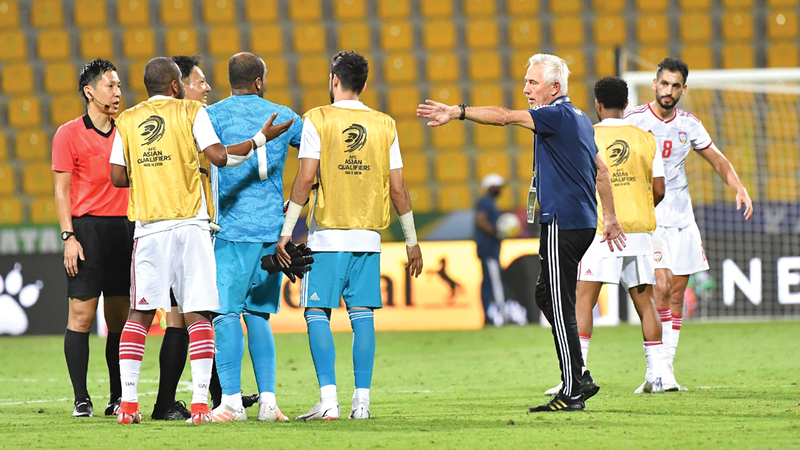 Khaled Awad: Marvik insists on playing in one style

The fans demand the departure of the coach, describing him as “technically bankrupt”

The UAE fans came out of Zabeel Stadium in Al Wasl Club, angry at the national football team’s 2-2 draw with its Iraqi guest, and contented with only one point, raising the tally of its points to three of the four matches it has played so far in the decisive round of the Asian qualifiers for the 2022 World Cup, weakening the Chances of competing for the qualification ticket.

The public held Dutch coach Van Marwijk, and the National Teams Committee in the Football Association headed by Youssef Hussein Al-Sahlawi, responsible for the negative results of the team, criticizing at the same time the way in which the Football Association runs the national team, calling for the departure of Marvik, who they described as the "technically bankrupt coach".

Estimated numbers of the team's fans at the match stadium, until the team players and coach arrived at the bus carrying them, chanted slogans calling on the officials of the Football Association to lead a process of real change among the team, in order to restore its true image and personality.

Tweeters on social media criticized coach Marvik and his way of playing, and held the National Teams Committee responsible for the decline in the results of the national team.

For his part, a former member of the Competitions Committee in the Football Association, Khaled Awad, described Marvik as "the bankrupt coach", meaning technically, noting that he has one way of playing that he insists on, and that he insists on the same players, and he told "Emirates Today": "I am surprised by the coach's speech that if he plays with two spear heads, he must change his tactics because any coach must have a set of technical plans that suit the opponent and the conditions of the match."

He added, "When the coach changes the way he plays by involving two players as a spearhead, the team will be better, and in a better attacking state, but the coach insists on his unhelpful tactics in which he plays matches."

Khaled Awad pointed out that "the coach insists on playing a certain style and refuses to change it, despite the positive result of this change when he makes this change for five minutes."

Social networking sites were buzzing with angry tweets about the form, performance and results of the team. Dr. Muhammad Bushnein said in a tweet on his account on “Twitter” the National Teams Committee, saying: “Speaking is easy and doing is difficult. The head of the National Teams Committee when he was a player more than once said and stated, many have passed us by. Cooks coaches, but we, as players, do everything on the field.”

Ahmed Al-Muqeem said: “If the news is true and Marvik was exempted, those who recommended contracting with him should be exempted after being dispensed with for the first time.” When will we learn that choosing a coach is based on complacency versus the homeland?

Al-Maidi commented: "Marvik made a mistake in two matches. The world is above and below and people are seeking to be fired. We have one of his mistakes from three years ago, and there is no life for whomever you call. By the way, both are the same mistakes and the same way of playing."

For his part, Bousalem said: “After the ruin of Malta, the National Teams Committee meets!

It is supposed to be after the second match, after the birds flew for their livelihood.”

"How do we qualify for the World Cup when we don't have a clear strategy, and so far we haven't solved our problems," said Khaled Muhammad Rubari.

Moussa Al-Dhahouri said: "The national team is losing and bidding farewell to the World Cup, and the media, analysts, critics and former players have forgotten the failures and are sitting and comforting the player Ali Mabkhout."

Ahmed bin Khadum said: “We are moving away, we are upset, but the longing for knowledge brings us back, we will stand behind you as long as there is a glimmer of hope.”

For his part, Youssef Boukhalifa said: "The Football Association has signed a coach who was dismissed. Three draws and one loss. The coach is taking revenge on us."

• Public outrage at the performance, form and results of White.

The Football Association announced on its official page via "Twitter" that the Board of Directors will hold a meeting, next Monday, at its headquarters in Dubai, headed by Sheikh Rashid bin Humaid Al Nuaimi, President of the Federation.

It is expected that the current crisis experienced by the national team after the negative results in the Asian qualifiers for the 2022 World Cup, as well as the fate of the technical staff of the team led by Dutch coach Marvik, and the re-formation of the National Teams Committee, the agenda of the upcoming meeting in the wake of several demands in the sports street to quickly correct the situation of the team And regaining its balance again, as a state of anger dominated the Al-Abyad fans after the team failed to achieve any victory out of the four matches it has played so far, after drawing in three matches against Lebanon, Syria and Iraq, losing in a match against Iran, and winning only three points, down from Third to fourth place in the standings of Group A teams.