Big brother Fredricson: "Peder might have to watch out"

Is there room for another show jumper Fredricson at the highest international level? Five years older Jens takes up the fight with his brother Peder. This weekend, he is back in the World Cup, which SVT broadcasts, for the first time in eight years. - Peder may have to watch out now. I might hit him one day, says Jens and laughs. 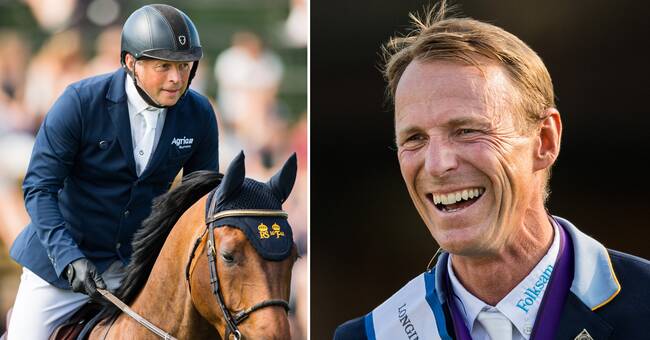 TT: Does equestrian sport have a hot rivalry to look forward to?

We ride a lot together, "tactics" in all matters, we have always done.

We see it more as if there are two chances to win the class if both are involved.

- We are most pleased with each other's successes.

Peder is a bit of a trail finder and it is exciting to keep up with his journey, says Jens Fredricson.

He knows he has a long way to go to be placed on the same shelf as Peder, world number one and Olympic gold medalist.

I work part time with quality and development responsibility at both Flyinge and Strömsholm and find it both fun and inspiring.

- Peder has taken the equestrian sport incredibly far in sports.

If you'll get him, he's probably in the gym if he's not riding.

The sport has developed, demands more and Sweden has been involved.

They are constantly helping each other, the Fredricson brothers.

- We look a little at development issues.

Now I have started ground work in a dressage saddle.

Then he fixed one and started figuring it out.

- He removed a few kilos on his jumping saddle and now I have also done it from mine, says Jens Fredricson.

Back the band for eight nine years and the Fredricson that was most talked about in equestrian circles was Jens.

He rode in the Olympics in London and contributed a year later to the European Championship bronze in Herning.

The same summer, he rode honors as GP winner in front of packed stands in Falsterbo.

Two years later, the championship horse Lunatic was retired, when 17. Jens Fredricson took a step back, trained young Swedish riders, devoted more time to work at Strömsholm and the family.

Now he is back at the elite level, but in a different time, with a completely different competition.

The top and breadth of Swedish jumping has never been better.

TT: How serious is your investment now?

- I make a full investment with the half time I have.

There are no restrictions in it.

I will not ride every weekend, but it is not needed.

Took the chance in Aachen

Jens Fredricson took the chance when he got it recently from the national team captain Henrik Ankarcrona, rode flawlessly in two rounds on Markan Cosmopolit in the national jumping in Aachen where Sweden came second.

TT: How far can it carry with the horses you have?

- I have two very good horses at the highest level.

Two of perhaps the best horses I have had in my life.

TT: What are you hoping for in the World Cup premiere in Oslo?

- To go there and make a good result.

There are some top riders who get there, but you should not care so much about them but just do your own thing.

The World Cup in Oslo is broadcast on SVT1 and on SVT Play on Sunday, starting at 3 p.m.