Kenyan athlete Agnes Jebet Tyrop found dead in her home. This was reported by the national federation of this sport. According to preliminary data, the 25-year-old runner could have been killed by her own husband, he is on the wanted list. A month before her death, Tyrop set a world record in the 10 km race on the highway. At the Olympic Games in Tokyo, she took fourth place at a distance of 5000 meters, and at the world championships she won bronze twice. Condolences in connection with her death were expressed by the President of the country Uhuru Kenyatta. 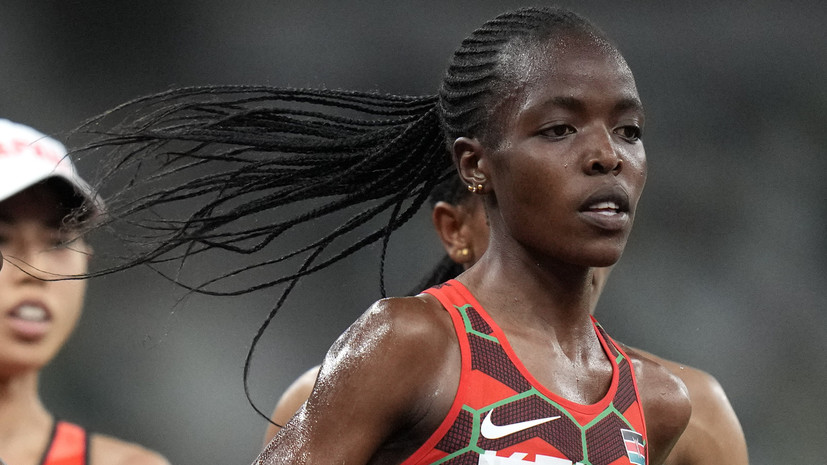 The world of athletics was shocked by the tragic news.

On October 13, it became known about the death of the Kenyan runner, the winner and medalist of the championships of the planet Agnes Jebet Tirop.

According to preliminary data, the 25-year-old athlete was fatally stabbed by her husband.

The incident was reported by the Kenya Athletics Federation.

The organization expressed its condolences to the family and friends of the deceased athlete, who set a world record in the 10 km race on the highway a month ago.

“Tyrop was found dead in her home in Itena, presumably after being stabbed by her husband.

We are still working to find out more details related to her passing.

Kenya has lost its gem, which has been one of the fastest rising stars in the international arena, thanks to its flamboyant performances on the track, ”the federation said in a statement.

According to media reports, local police said Tyrop was found dead in her bed with a neck wound.

The main suspect is the athlete's husband Emmanuel Rotich, who disappeared after the incident and, according to AFP, told the athlete's parents that he "did something wrong."

The Kenyan newspaper The Star writes that Tyrop recently lived at a training base due to a spat with her husband, but returned home two days before her death after reconciliation.

The incident greatly disturbed the inhabitants of Iten, and a crowd of people soon gathered around the house.

The police had to cordon off the area.

Media reported that the crowd included famous athletes such as three-time world half marathon champion Mary Keitani and Joycelyn Jepkosgei, who won the London Marathon in early October.

Tyrop was an active athlete and one of the strongest long distance runners. On September 12, just a month before her death, the Kenyan took part in the women's 10 km race in the German Herzogenaurach and ran the distance in 30:01. She broke the world record held in this discipline since 2002. True, already on October 3, Tirop's achievement was beaten by the Bahraini runner Qalqidan Gezan at the competitions in Geneva. The Kenyan athlete also went to the start then and became the second. This was her last race in her life.

Tyrope has had remarkable success in the past.

In 2015, she sensationally won the World Cross Country Championship and at 19 became the second youngest athlete to do so.

Later she focused on stadium running and two years later took part in the World Championships in London.

In 2017, she won bronze at a distance of 10 km, and two years later she repeated her success.

Tyrop became the first athlete in eight years to climb the podium in this type of program at two championships in a row.

In 2021, Tyrop focused on the half-distance distance and entered the Kenya Olympic team.

In the final of the 5000m race, she stopped a step away from the medals, losing only to Dutch Sifan Hassan, compatriot Hellen Obiri and Ethiopian Gudaf Tsegai.

For Kenya, where athletics is especially popular and eminent runners are popular personalities, Tyrop's death was a great shock. Among others, President Uhuru Kenyatta reacted to the tragedy. He demanded to find and punish the person responsible for the death of the athlete.

“It is alarming, extremely regrettable and very sad that we have lost a young and promising athlete, who at the age of 25 brought so much fame to our country with her feats on the world athletics arena, including at the Olympic Games in Tokyo, where she was part of the Kenyan national team.

It is even more painful that Agnes, the heroine of Kenya in all respects, tragically lost her life at a young age as a result of a criminal act committed by selfish and cowardly people.

I call on our law enforcement agencies, led by the National Police Service, to track down and detain the criminals responsible for the murder of Agnes, so that they answer to the fullest extent of the law, ”the head of state said.