The UAE Football Association and "Expo 2020 Dubai" signed a joint cooperation agreement, according to which Expo 2020 will become an official partner of the Football Association, which is the first local sports authority to sign an agreement with Expo 2020. The signing ceremony took place in the presence of Sheikh Rashid bin Humaid Al Nuaimi, President of the Federation, and Reem The son of 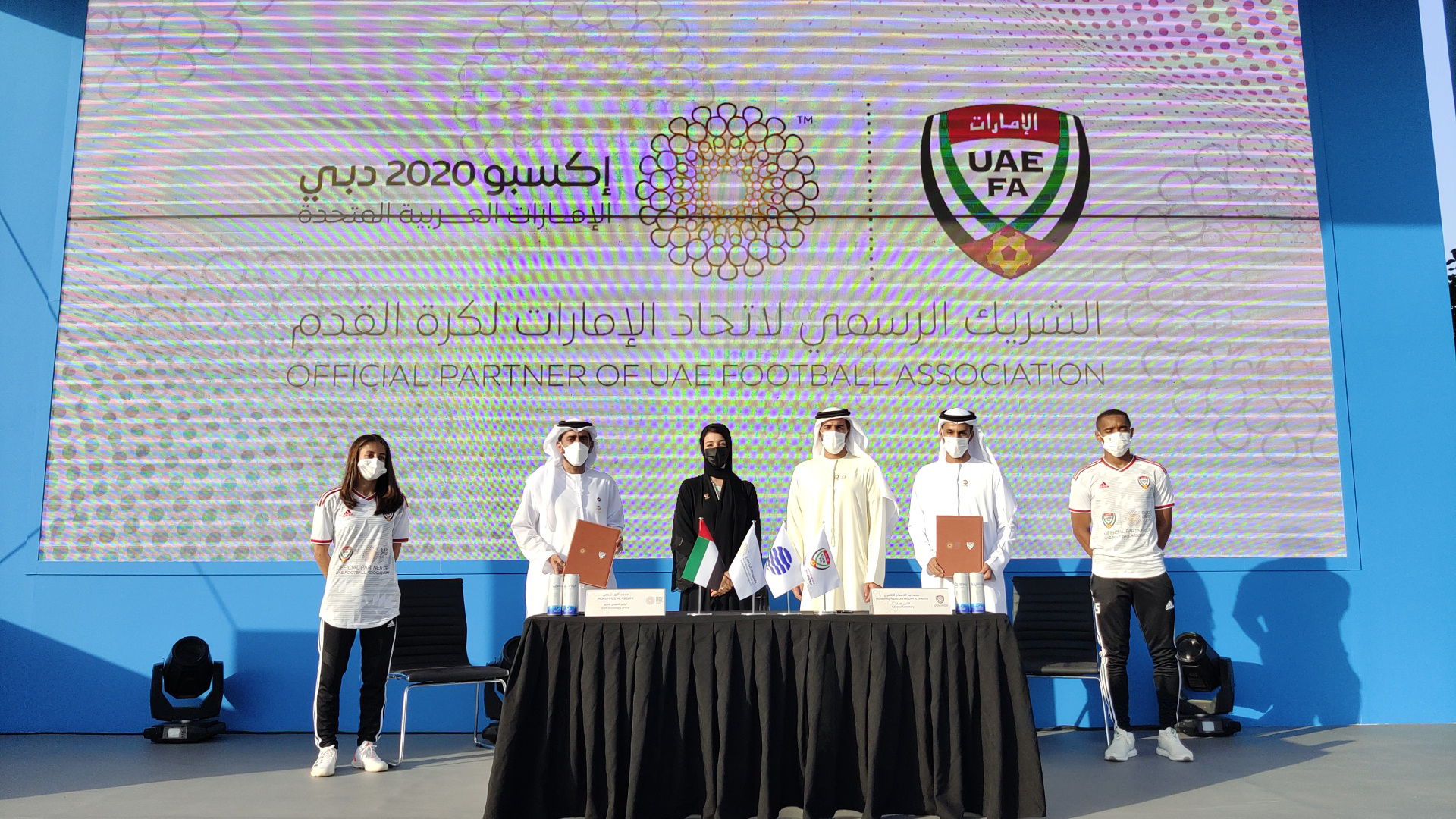 The agreement was signed by the UAE Football Association, Mohammed Abdullah Hazam Al Dhaheri, Secretary-General of the Federation, and Mohammed Al Hashimi, the Expo's Chief Technology Officer. The signing ceremony of the agreement was attended by our national team player Ali Salmeen and our women’s team player Areej Al Hammadi. According to the agreement, the Expo 2020 logo will be placed on the shirts of our national teams and the uniforms of referees, and the distribution of tickets for the national team matches with Expo tickets, as well as the promotion of the global event in all competitions organized by the Federation Football, whether the President's Cup, the First Division League, the Second Division League and the friendly matches for all our national teams. The partnership also includes holding workshops and training sessions in the Expo stadiums and other various interactive activities.

This agreement comes within the efforts of the Football Association to serve major national projects, and within the framework of concerted efforts and integration of roles between state institutions, and seeking to encourage initiatives aimed at raising the flag of our beloved country in all international forums, as well as introducing the United Arab Emirates, as a thriving global trade and tourism destination, simultaneously With the start of the major global event, Expo 2020.

Sheikh Rashid bin Humaid Al Nuaimi, President of the Emirates Football Association, stressed that "the partnership comes from a firm belief in the importance of this global exhibition, especially since it is being held in the land of the Emirates, the land of coexistence and tolerance," stressing that "the presence of the Emirati football in this great event along with local and international companies." A giant in line with the vision of the Football Association 2038, and embodies our future aspirations, as the Emirati football needs this presence and participation with the giants of event makers in the world.”

For his part, Sheikh Rashid bin Humaid Al Nuaimi, President of the Emirates Football Association, accompanied by board members, visited the UAE National Pavilion at the Expo. He was received by Noura bint Mohammed Al Kaabi, Minister of Culture and Youth, Commissioner-General of the UAE Pavilion. Her Excellency presented An explanation of everything included in the pavilion, which tells the history of the country, its human values, and its inspiring success story for different generations.

"Sports events and activities are an integral part of the Expo 2020, which reflects our concern for human health and safety. We are honored to be associated with this partnership with the UAE Football Association to promote the Expo and its events, and raise awareness of its sports and other activities," said Mohammed Al Hashimi.

He added, "We are all excited at Expo 2020 and with the UAE Football Association to bring people together for meaningful change in important aspects, such as youth empowerment, gender equality, and inclusion of all, as well as the use of technology for benefit and good."

"We are pleased to see how the powerful universal language of football can inspire millions of people around the world to be part of a truly exceptional World Expo and a historic milestone in this vast region," he added.