Mission feasible: Kondratyuk got the third ticket to the Games for Russia, Tuktamysheva and a couple of Tutberidze skated "in full"

Mark Kondratyuk finished third at the Nebelhorn Trophy in Oberstdorf, updating all his personal achievements at the senior level. Thanks to this, the Russian national figure skating team will be able to declare three people in men's single skating at the Olympic Games for the first time in 20 years. One of the competitors of the 18-year-old Podolsk resident Alexander Samarin, meanwhile, at the first stage of the Russian Cup in Syzran, for the first time in his career, managed to score more than 100 points in the short program. Elizaveta Tuktamysheva and Evgenia Tarasova with Vladimir Morozov, who won in their categories, skated not too perfectly, leaving conflicting impressions. 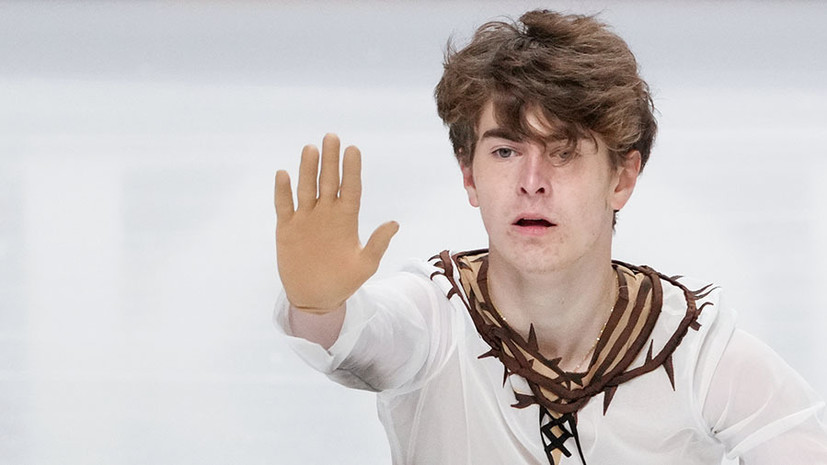 At the end of last week, the season of really big skating opened: Mark Kondratyuk fought for the third men's Olympic quota at the Nebelhorn Trophy tournament, and at the first stage of the Russian Cup in Syzran, several applicants for a place in the national team showed their programs in real competition mode: Elizaveta Tuktamysheva, Alexandra Trusova and Alexander Samarin - in single skating, Evgenia Tarasova / Vladimir Morozov - in pairs.

Kondratyuk became the third in Oberstdorf, having performed three quadruple jumps in the free program, and for the first time in 20 years Russia had the opportunity to take three singles to the Olympic Games. The results shown to the wards of Svetlana Sokolovskaya cannot be called outstanding (although he rewrote all his personal achievements): in the short program, Mark remained only fifth, but this was the very case when the main task of the skater was not the fight for victory (in Oberstdorf it was won by the American Vincent Zhou - 284.23), and the need to gnaw out a quota with our teeth.

On the one hand, nothing seems to be complicated.

On the other hand, in history, albeit a very long time ago, there was a case when the country's strongest figure skater in 1993 Maria Butyrskaya went to the World Championship in Prague and did not qualify there, being content with the final 29th place.

Despite the fact that the day before in training, Masha perfectly performed the entire free program in its entirety, drew a flurry of applause, signed autographs at the board for a quarter of an hour and no less claimed the role of the favorite of the competition than Oksana Baiul, who eventually rose to the highest step of the podium.

So with regard to Kondratyuk, everyone understood how great the psychological burden that had quite suddenly fell on the guy (it was originally assumed that European champion Dmitry Aliev would perform in Oberstdorf).

Nobody undertook to predict how everything would end.

The degree of responsibility was indirectly evidenced even by the fact that Sokolovskaya, whose strongest student Alexander Samarin on the same days performed at the stage of the Russian Cup in Syzran, went to the competition not with him, but with Kondratyuk.

According to the results of the short program of men in Syzran, it was just right to think about the fact that without the personal presence of the coach, Samarin performs more collected.

Sasha just blew up the hall with his "Matrix": for the first time in his career he exceeded the grandmaster milestone of 100 points, surpassing the previous personal achievement by almost 7.5 points.

But in the free program, magic did not happen: Samarin fell from a quadruple lutz, twice landed not very well from a triple axel (which is why a cascade with one of these jumps did not work) and made a mistake on a triple rittberger.

The points scored were enough for the overall victory, but Alexander lost the free rental to Alexei Erokhov, and solidly: 170.57 against 183.21.

And then it's time to return to Kondratyuk again.

During those 20 years that Russian singles skaters performed at the world championships and Olympics with a truncated composition, one could often hear: why, they say, do we need three quotas at all, if at best one athlete is capable of fighting for medals? This very chosen one until 2014 was the two-time Olympic champion Evgeny Plushenko, and after he left the ice, the real leader in men's single skating did not happen, although Maxim Kovtun, Mikhail Kolyada, Dmitry Aliev and the same Samarin alternately claimed this role.

And a year ago, Russian singles suddenly began to break through. And so powerful that hardly anyone will undertake now to predict the names of those who in December will earn the right to represent the country at the Games in Beijing. But the fact that there will be three such athletes at once can already be called a colossal achievement. And at the same time to say thank you to Mark - for being a musician in Oberstdorf.

In terms of sports interest, the women's tournament in Oberstdorf with the victory of the American Alice Liu (207.40) was much inferior to what was happening in Syzran performed by Alexandra Trusova and the 2015 world champion Elizaveta Tuktamysheva. Sasha arranged an on-site training session to practice the triple axel in the short program. On landing from this jump, she fell again, as at the recent tournament in the United States, but the skater's desire to continue to bend her line now seems to be the only true one. After Trusova withdrew from the free program, winning the short program, Liza Tuktamysheva remained the only contender for victory in the tournament. And she won it with a score of 220.07.

The low scores were due to a number of errors.

How critical are they?

It is unlikely that this question can be answered unequivocally.

On the one hand, Lisa stands apart from the rest.

Its main task is to qualify for the Olympic team, which means that it will only be necessary to start getting to the peak of form by December: it is too difficult for older athletes to perform at the highest level for themselves for several months.

On the other hand, all the mistakes made by Tuktamysheva at the first tournament (with triple axels of excellent quality) left the impression of a certain carelessness of performance, as if the skater was completely consciously skating "in full".

And this is already a direct and, probably, not a very correct message to the judges: they say, I don't really need your points.

Evgeny Tarasova and Vladimir Morozov are in approximately the same position as Tuktamysheva.

The games in Beijing will most likely be the last for this couple, but the problem is that they need to qualify there first.

Talking about the Olympic season and the chances in pair skating, Tatyana Tarasova, shortly before the start of the tournament in Syzran, noted that Zhenya and Vladimir, with the transition to Eteri Tutberidze, had not yet achieved any global shifts, which was impossible in such a short time.

There are no bright, catchy programs, no wow effect ... But so far, other Russian couples who intend to fight for the Olympic victory do not have it either.

“In pair skating, all programs are staged primarily in such a way as to emphasize the elements. There will be elements, the audience will begin to react accordingly. And when the program goes from beginning to end with applause, it is no longer so important what kind of music the skaters skate to ... ”- the honored coach noted in the same conversation.

By the first start, Tarasova and Morozov staged a new short program, replacing "Moonlight" with Pygmalion and Galatea, but with elements, that is, with the most trump part of their skating, the athletes did not work out too well in free skating: Zhenya doubled salchow and stumbled one by one in jumping combination and on the second of the outliers.

She left exactly the same feeling of skating "in full" as Tuktamyshev did in the singles tournament.

This did not prevent the couple from winning, but it is unlikely that the first place won without any competition was in this case an end in itself.

And after a week and a half, the two-time European champions will have a much more responsible start: at the Finlandia Trophy tournament they will have to compete with the reigning world champions Anastasia Mishina and Alexander Gallyamov.