Seattle Kraken has played its first game. And it was a 5-3 victory against Vancouver. - It could not start better, says Kraken's CEO Tod Leiweke, according to AP. 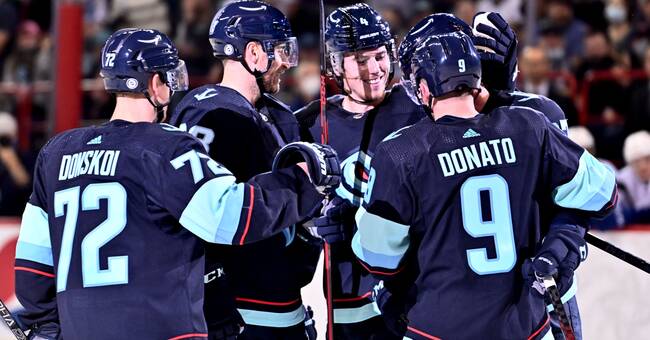 The preseason is in full swing and the NHL drop is a couple of weeks away.

The Seattle Krakens played their first game last night - and it was a 5-3 win against the Vancouver Canucks in front of 10,208 spectators at home.

- It is fantastic to be back with a full house, says Seattle coach Dave Hakstol after the match and continues:

- We have all long missed it.

Being able to do that was amazing.

The first pre-season goal in Kraken's history was scored by Riley Sheahan, 2.32 into the second period when the team was down 0-2.

Then it came loose for the home team who scored two more goals in the same period, both in power play.

Jared McCann and Ryan Donato each scored in the same period before Swedish Nils Höglander reduced for Vancouver.

Morgan Geekie got round of the goal scorer with double goals in the last period.

- The number (supporters) who carry Kraken merch, the genuine enthusiasm, it could not start better, says Kraken's CEO Tod Leiweke.

It's touching and I feel emotional.

The NHL season kicks off for Krakens on October 13 when the team visits the Vegas Golden Knights on away ice.

MORE NHL: Zibanejad on NHL players in the Olympics (Aug 11)