Great podium for Sainz under a crazy rain in Sochi

In the wake of Lewis Hamilton and Max Verstappen, drenched by a rain that turned everything upside down, Carlos Sainz climbed in Sochi to his third podium at the 2021 World Cup. A climax to the ... 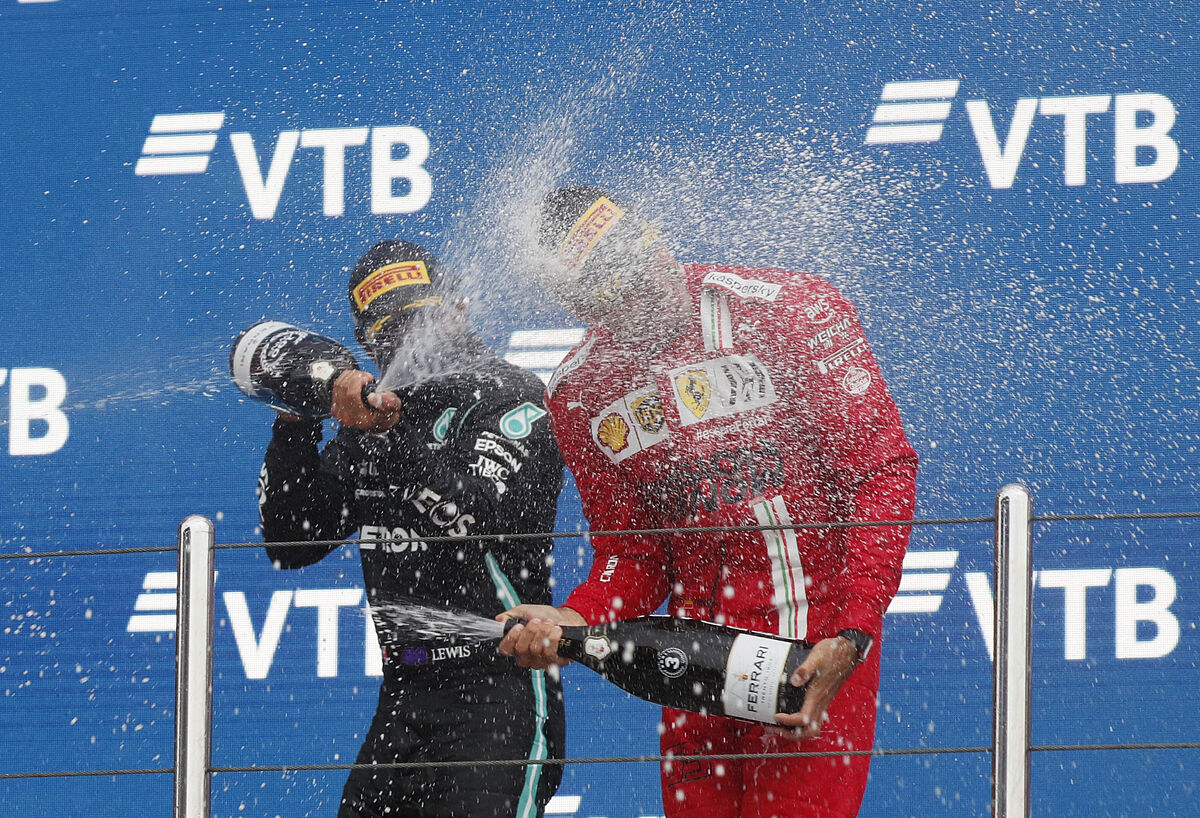 In the wake of

, drenched by a rain that turned everything upside down,

climbed in Sochi to his third podium of the 2021 World Cup. A culmination at the height of his great Sunday, where he led in the initial stage and where he kept his cool in those final six laps, which ruined the fabulous

. In that very delicate trance, with some slopes of the sky and others of the inevitable passage through the pits, the Mercedes leader, who already has 100 victories in F1 and regains the initiative in the World Cup, was right. Those two points, of course, are not going to discourage Verstappen, author of a superb comeback from last place on the grid.

The champagne bath with the two F1 titans is the best tribute to Sainz, who this season had already been on the podium in Monaco and Hungary. A reward worthy of his irreproachable career. Perhaps another had collapsed at the appearance of

on the tires or had gone crazy in the final Russian roulette, but Sainz remained impassive. After the heads up against

, when the first drops littered the asphalt, Ferrari called him to chapter. There were seven laps to go before the checkered flag, but that switch to wet tires proved crucial.

They were moments of anxiety for all. Even for Hamilton, who had been called to chapter, six laps to go. At first he flatly refused, but shortly after he had to accept the evidence. Norris, then leader, warmed his head with them. The young McLaren, hungry for glory, resisted going through the pits. And that was his undoing. There was no human way to drive on that skating rink. Red Bull, who had Verstappen stuck in seventh place, also saw him coming before the rest.

No one would have imagined such an outcome two hours earlier, when to follow the trail of the rain you had to look up at the waters of the Black Sea. The meteorologists did not predict anything serious and the veterans warned of the difficulties of the second place on the grid. These pessimistic forecasts were broken by Carlos Sainz with a formidable start, in which he held, inches from the wall, before the onslaught of George Russell and attacked the lead with a great braking rush against Lando Norris. Almost a year after that wonderful start in Portimao, the Madrid native was back at the top of a race.

Unlike then, Sainz did not come to settle for something circumstantial, not even when Ferrari ordered him to reserve strength. The threat of

was common among its rivals as well. Including Norris, author of a couple of very aggressive approaches from the tenth lap. In one of them he damaged the front left wheel, although a couple of turns later, the McLaren driver regained first place.

Of course, the plug organized by Russell slowed down Ricciardo, Hamilton and Pérez, on board cars faster than the Ferrari. The exit of Sir Lewis was not good, losing the place before Ricciardo and Alonso. Forced by the rush, Hamilton overtook the Spaniard, although always following a rather conservative race plan. Over the radio, Mercedes engineers informed him of Verstappen's fierce recovery.

For Max, condemned to the back of the grid, 10 laps had been enough to regain eight positions. Not that he was limited to passing minor opponents, but that he was relentless against Valtteri Bottas and Charles Leclerc. If the Finn almost put it on a tray, what he did against Ferrari, with a slight touch on the wing included, was a masterful move. After the favorites entered the

, the Dutchman was already fifth, in the wake of Alonso, who had found a more than interesting pace with his Alpine.

Just when half of the grand prize was about to be completed, Red Bull called its leader to change to the medium tire.

Just the opposite of Hamilton, who went through the pits on that same lap and faced the decisive stage on the hard compound, his favorite.

Thus, with almost no apparent effort, he brushed off Sainz.

The fight for the podium places was exciting.

Ricciardo's options were seriously compromised by a mistake by his mechanics, but McLaren still held the trump card for Norris.

Red Bull could not loosen Perez's right rear wheel and those 8.9 seconds of delay multiplied Sainz's optimism, who had only used 4.2.

With 15 laps from the checkered flag, the third place of the box was at hand for Carlos.

Of course, Ricciardo and Pérez had to be contained with tires threatened by degradation.

If incentives were lacking there were still those who rubbed their eyes with Alonso's overtaking Verstappen.

No cheating or cardboard.

The verve of the Alpine, to the beat of Fernando's hammer, revealing the Red Bull.

And Norris's eight seconds in front of Hamilton seemed like just a sigh.

In just a blink of an eye, the seven-time champion reached the level of his young disciple.

Too bad the water, synonymous with unparalleled shocks in F1, was this time so cruel to Norris.

The driver's award of the day will be no comfort to him.