Mansour bin Mohammed: The rapid development of jiu-jitsu is in line with our strategy to establish a healthy lifestyle

Yesterday, His Highness Sheikh Mansour bin Mohammed bin Rashid Al Maktoum, Chairman of the Dubai Sports Council, witnessed the final round of the Vice President’s Cup for Jiu-Jitsu, at the Jiu-Jitsu Arena in Zayed Sports City in Abu Dhabi, which concluded with His Highness crowning the top clubs of the League Cup.The champions were able to 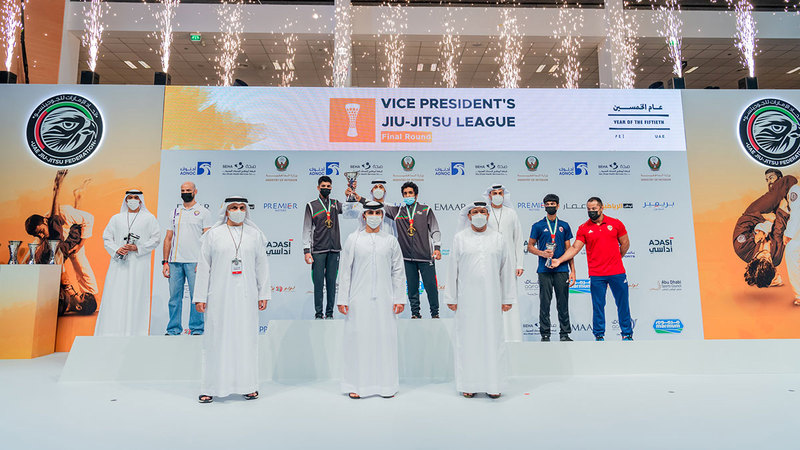 Mansour bin Mohammed: The rapid development of jiu-jitsu is in line with our strategy to establish a healthy lifestyle

Mansour bin Mohammed while attending the coronation of the winners.

Yesterday, His Highness Sheikh Mansour bin Mohammed bin Rashid Al Maktoum, Chairman of the Dubai Sports Council, witnessed the final round of the Jujitsu Vice President Cup, at the Jujitsu Arena in Zayed Sports City in Abu Dhabi, which concluded with His Highness crowning the top clubs in the League Cup.

The champions of Al Wahda, Al Ain and Sharjah Club for Self-Defense Sports managed to win the league gold in the adult, youth and junior categories, respectively.

His Highness said: "The high values ​​espoused by the sport of jiu-jitsu are in line with the Emirati identity, which we are keen to consolidate in the fabric of the UAE society, and in the hearts of the new generation. Sports, which constitutes an important supporter of our strategic vision of establishing healthy lifestyles among all members of society, with a focus on emerging talents that are the most important guarantor of the bright sporting future of the country at the global level.”

His Highness added, "The UAE has become the focus of attention for jiu-jitsu lovers from all over the world, thanks to the great support that he personally received from the rulers of the Emirates, as this position has been consolidated thanks to the successive events hosted by the various emirates of the state for the sport of jiu-jitsu."

His Highness continued, "The conclusion of the Vice President's Cup comes at an ideal time, while the jiu-jitsu family in the country is preparing to receive the world in the World and Abu Dhabi World Professional Jiu-Jitsu Championships, the two largest events on the global sporting calendar, during which we look forward to following up on the honorable performance that we are accustomed to from players. Our national team.

His Highness explained: "Local events such as the League of His Highness the Vice President of the State are one of the most prominent enablers of the growth of the sport of jiu-jitsu in the UAE, as it is an ideal platform to discover new talents, and an important opportunity that allows UAE stars to experience the atmosphere of international championships in local competitions, which enhances their physical and mental readiness to enter The carpet of global benefits in which the UAE champions have always raised the flag of the country on the podiums, and here we commend the continuous efforts made by the Emirates Jiu-Jitsu Federation to advance this sport and consolidate its position among members of society, until the UAE became the global capital of the game.

His Highness concluded his speech by emphasizing that the sports sector in the country is no longer just a recreational sector, but has become an important tributary of sustainable development at the individual, social and economic levels, especially in view of the important role it plays in building individuals physically and psychologically, in addition to being a community activity that unites fans at heart. One, noting that the UAE has a world-class infrastructure that enables it to host the most prestigious international sporting events, as this position has been enhanced during the past period, given the distinguished response of all sectors of the country in the face of the pandemic, which has established the reputation of the UAE and its presence as a safe health destination to host the largest events sports.

For his part, Mohammed Salem Al Dhaheri said: "The presence of His Highness Sheikh Mansour bin Mohammed bin Rashid Al Maktoum, Chairman of the Dubai Sports Council, today, the conclusion of the Vice President's Cup competitions, is the most important honor for jiu-jitsu players from various clubs and academies of the country, who were keen throughout the rounds of The five leagues, to give their utmost to win the championship cup, inspired by the vision of His Highness Sheikh Mohammed bin Rashid Al Maktoum, Vice President and Prime Minister of the UAE and Ruler of Dubai, that the will conquers the impossible, and that there is no success without determination and determination.

Al Dhaheri added: “On behalf of the president of the federation and all members, I would like to congratulate the champions of Al Wahda Club, Al Ain and Sharjah Self-Defense Sports Club, who, thanks to their outstanding performance, were able to take first place in the adult, youth and junior categories, respectively.

Today, all players have demonstrated our firm conviction of the importance of local tournaments in enabling talents to hone their skills and preparations before entering the upcoming international competitions. in which we participate.”

720,000 UAE dirhams, the value of the financial prizes obtained by the winning clubs and academies.