Important victories give Europe hope for a new miracle

The European hemorrhage was eventually stopped, but it would probably have required more than that. The USA leads big, 11-5, before the final singles in the Ryder Cup. - We're still not gone. It's a long day left, twelve games, says Shane Lowry. 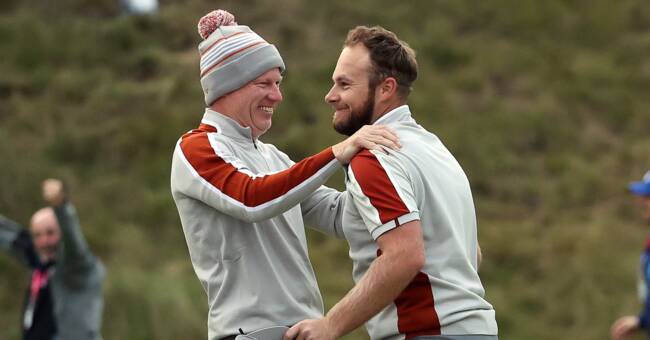 The Irishman Lowry lowered the par putt a little earlier who secured the victory on the 18th hole, clenched his fists in the air and shouted wildly his joy before he gave his playing partner Tyrrell Hatton a real bear hug.

The happiness of the European reduction to 4-9 says a lot about what darkness the Ryder Cup had been so far on Whistling Straits.

But in Saturday's best balls - which began with the USA in the lead 9-3 - Europe finally offered to fight in earnest.

Not least Lowry, who was the one Hatton often had to lean on in the meeting with Tony Finau and Harris English.

Shortly afterwards, the next European point ticked in on the scoreboard when Jon Rahm and Sergio García took the third victory out of three possible together, against Brooks Koepka and Jordan Spieth.

The big match winner now was world setter Rahm, who lowered important birdie putts on both the 15th and 16th before the match ended on the 17th.

It was for a while European lead in three of four best balls, but Viktor Hovland and Tommy Fleetwood did not manage to keep up with Bryson DeChambeau and Scottie Scheffler.

The Europeans still led with five holes left, but then the Americans won three straight holes in front of an ecstatic home crowd.

The key was when DeChambeau put his birdie putt on the 14th, before Fleetwood missed from a shorter distance so that the match was leveled.

That loss also meant that Europe did not manage to get closer to the singles.

The fourth best ball was a formality when Dustin Johnson and Collin Morikawa drove over Rory McIlroy and Ian Poulter.

Johnson is the first American to win all four Parm matches since Larry Nelson achieved the feat in 1979. McIlroy and Poulter?

They are completely under the ice and are just two of several reasons why Europe's situation looks dark ahead of Sunday's crucial singles.

Europe must take 9 out of 12 points in the singles, to reach the total of 14 needed to defend the dent that was taken back in the victory in Paris three years ago.

Theoretically, it is thus to a very high degree.

All twelve players on the American team have already contributed points.

And there are many who shine.

Not only Dustin Johnson is one hundred percent - debutants Morikawa and Xander Schauffele have both won three of three matches.

In Europe, it has been thin behind the two super Spaniards.

Only six players have scored points - so half the team has been zeroed so far on the delicious golf course on the west shore of Lake Michigan.

So it's not just McIlroy and Poulter who need to step up a lot if Europe is to have the slightest say in the fight for the Ryder Cup dent.

- A disappointment not to contribute points to the team yet, says McIlroy.

- Hopefully I can go out tomorrow and do my best to take a point, and hopefully we can gather together so that they at least get something to sweat over in the afternoon.

And in memory, the latest European victory lives on American soil, when a 6-10 deficit was turned into a victory in "The Miracle of Medinah" 2012.

- If we can win three or four of the early matches, you never know.