Departure from the Russian Cup and one victory in the RPL: ​​why Semin left Rostov 53 days after his appointment

Yuri Semin resigned as head coach of Rostov 53 days after his appointment. According to the specialist, the decision to terminate the contract ahead of schedule was made jointly with the club's management. Assistant coach Yuri Baturenko expressed the opinion that the main reason for the dismissal was the defeat at the Chaika from Peschanokopsky in the Russian Cup. Experts, however, consider the resignation to be logical, since recently the southerners have shown not the best results in the national championship. 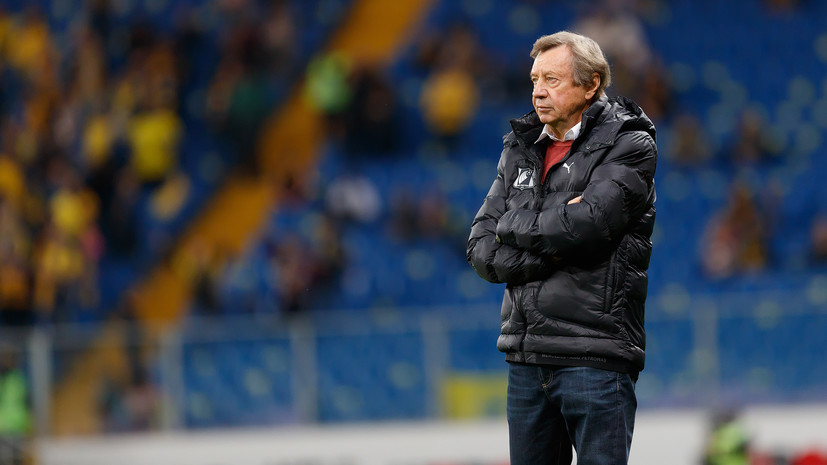 Yuri Semin's departure from Rostov became the main event of the past day in Russian football.

The specialist headed the team less than two months ago and seemed to be staying in it for a long time, but the reality turned out to be much more severe.

According to the press service of the team, the decision to dismiss was made after a meeting between the 74-year-old coach and the president of the club Artashes Harutyunyants.

The functionary himself thanked the mentor for the time spent in the team and teamwork.

“Yuri Pavlovich is a wonderful, decent person and a coach with a capital letter, a real professional.

But this is football, unfortunately, it happens that way.

We will have a warm and good relationship.

I wish him good health and good luck, ”said Harutyunyants.

The specialist also confirmed that the resignation was a joint decision with the club's management.

At the same time, he assured that he was not going to end his career.

“I am grateful to“ Rostov ”and personally to Artashes Harutyunyants for the time we spent together.

Rostov-on-Don has a very young team: the young players who appeared with me have a good future.

I hope these guys will be worthy to defend the honor of the club in the future, "- quotes Semin" Championship ".

The coach also called the yellow-blues' weak results in the current season logical.

In his opinion, it would be difficult for any specialist to work with a team without pre-season training.

After Semin left, Zaur Tedeev was appointed acting mentor of the club, who has been working in the club system since 2019 and is the senior coach of the Rostov youth team.

On September 26, he will lead the basis for the home match of the ninth round of the RPL against Akhmat.

Yuri Semin took over Rostov on 4 August after Valery Karpin decided to leave the club and focus on working for the Russian national team.

Moreover, in the two starting rounds of the 2021/22 season, the RPL under the leadership of the former steering team from the banks of the Don did not score a single point.

However, even with a 74-year-old specialist at the head, the team won only one victory in the championship in six matches with three draws and two defeats and dropped to the penultimate, 15th place in the standings.

“For me it’s quite difficult.

Probably, here I also made certain mistakes ... There was no stability of the line-up.

The footballers are too young ... But I really liked the city, the fans.

However, in this case, I think we made the right decision, ”the coach told Sport-Express.

His assistant Yuri Baturenko said that the main reason for his resignation was the defeat at Chaika in the Russian Cup (0: 1).

The team from Peschanokopsky plays in FNL-2, and, of course, the yellow-blues were the undisputed favorite, but lost to their modest rivals and lost their chances of reaching the playoffs of the tournament.

“This is a derby that we had no right to lose.

The rest is not the main thing.

In Rostov-on-Don, there was not a single fan who would have come to terms with this defeat ... Did Semin initiate the departure?

There was just a situation when it was necessary to change something.

They sat and talked for a long time.

The club has very decent people - the president and all his entourage ”, - quotes Baturenko“ RB Sport ”.

The former leader of Rostov Alexander Gatskan also expressed confidence that the specialist's departure was influenced by unsuccessful results, and the defeat in the Cup could shock the titled coach.

“Perhaps a conflict with the leadership.

He failed to do what he planned.

He left the team in order for her to have a chance to rectify the situation, ”suggested the ex-captain of the Don club.

In turn, the former head coach of the Russian national team Boris Ignatiev noted that the day before his dismissal, he talked with Semin, and he did not tell him anything about the resignation.

I was sure that failures, troubles are a temporary phenomenon, and Semin will arrange everything at his own discretion ... He is an experienced person and perfectly understands what is happening, how everything looks, and made such a decision, "Ignatiev emphasized in an interview with Match TV. ...

At the same time, in his opinion, it is too early to talk about the end of Semin's career, since he is full of strength, energy and ideas.

“A fountain of ideas sprinkles.

I judge so based on our communication with him.

Semin on a constructive path.

Not just living the day from morning to evening, but busy with business, ”the expert added.

The ex-president of Lokomotiv Nikolai Naumov also admitted that he does not want to believe in the end of the career of the famous coach, with whom he worked in the Moscow club in the early 2010s.

According to the functionary, the resignation from Rostov was influenced by the sale of the leading players, and the mentor himself could well have expected that he would be given more time to build a team.

Well-known commentator Dmitry Guberniev expressed his admiration for Semin for his desire to constantly look for new challenges at his age.

The TV presenter called the dismissal of a specialist predictable, although he drew attention to the fact that difficulties in work could arise due to the fact that the mentor did not conduct preseason training camps.

“The team is performing poorly, and in such cases the head coach is changed.

And cool coaches, like an old woman, have a hole.

But I am not retiring Semin.

I will not be surprised if he still leads some team and wins something with it, ”the journalist said.