There continues to be a class difference in the Ryder Cup. Spanish superduo Jon Rahm and Sergio García are still the only players in Europe's team to have won any matches - and the USA now leads 9-3. 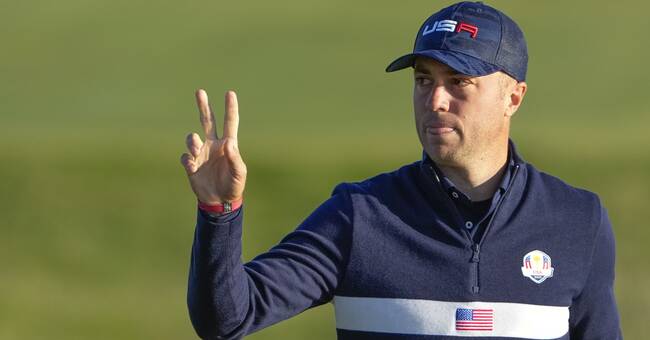 The American management is just growing and growing on Whistling Straits in Wisconsin.

3-1 was 6-2 before the first day of golfing was over and in Saturday's foursomes it was again a "three-one" for the USA and 9-3 in total.

Nothing speaks for a European turnaround, but it is in any case lucky that world setter Jon Rahm and Ryder Cup legend Sergio García are in the team.

Otherwise the situation would have been even worse.

The Spaniards were alone in winning a match for Europe on Friday - and did the same now that they were paired in even in the foursome.

It did not even matter that opponents Brooks Koepka and Daniel Berger won the first three holes.

After nine holes, Rahm and García caught up and after 17 holes, the match was decided.

This means that García is now the only one to have won 24 Ryder Cup matches for Europe, one more than Nick Faldo.

And more importantly: The score in that situation ensured that the US lead shrank to 6-3.

- It was important, but we need more.

It is not enough with what we did, not in the situation we are in, said García and wished a good European end to the other three matches.

But the 41-year-old, who is playing the Ryder Cup for the tenth time, was not heard.

Dustin Johnson and Collin Morikawa held off and won 2/1 against Tyrrell Hatton and Paul Casey.

It was not enough that the latter managed to put a long shot for eagle on the 14th hole.

Casey has been lukewarm in the Ryder Cup apart from that golden grain, but he has still played three games and lost all of them.

One of several question marks one can put for Captain Padraig Harrington's coaching so far.

And Justin Thomas and Jordan Spieth also became a winning pair in the end.

Despite Viktor Hovland and Bernd Wiesberger being three up after six holes, the Americans managed to turn around and win by 2/0.

When the United States comes into play with the best team ever on paper - and also meets expectations - Europe's position is of course difficult for a fanatical American home crowd.

In any case, a consolation is that the Ryder Cup, in terms of the number of matches, has not even come halfway.

16 of 28 points remain to be played, but if Europe is to have a reasonable chance, the pick-up must start directly in Saturday night's best balls.

Otherwise, Sunday's closing singles could be a rare undramatic story.