Ford Mustang Mach-E or Audi Q4 e-tron Which of these electric SUVs is better?

As electric cars become mainstream, a few things need to be rethought. For example: choosing between a generalist brand and a premium brand was not a very ... 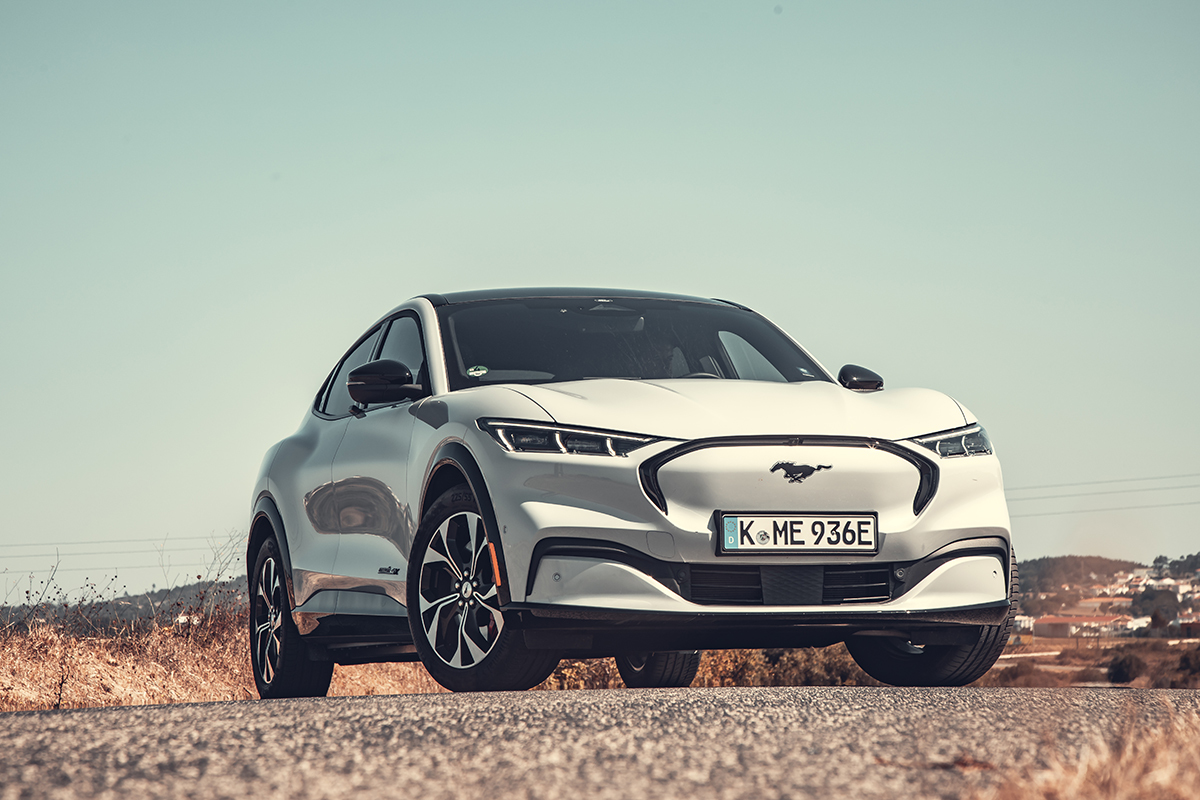 As electric cars become mainstream, a few things need to be rethought

. For example: choosing between a generalist brand and a premium brand was not a very common situation. The first favors rationality and the second has a greater aspirational power, with implications in prices, qualities or technical solutions applied to vehicles.

With battery-powered models, those notions are a bit watered down, while other priorities may be more determining. Namely, autonomy and charging power.

comparing a Ford Mustang Mach-E and an Audi Q4 e-tron would raise some eyebrows if they were combustion, but that in this new era seems to make sense.

And more if we consider that the Ford is leveraged on a name with a lot of pedigree (Mustang) that not everyone can wear. And it turns out that the second Mustang ever, is also the first electric Ford (if we forget the limited and outdated project on the Focus) and debuts

a platform designed from the ground up, a rare privilege in our day.

It was something that even

Because that platform turns out to be the "backbone" of VW, Skoda, Seat and Audi electrics.

The thing is, the Mustang Mach-E was ready.

On the other side is the Q4, which is just one of 20 electric models that Audi wants to have on sale in 2025

Visually we have the first surprise of this confrontation ... or maybe not.

The Mach-E turns a lot of heads, quite a bit more than the Q4 weighed down at this point for a more conservative aesthetic.

The American is much

being almost the same in height

The German car has a 4 cm higher ground clearance

(which gives it that SUV look compared to the more crossover "air" of the Mach-E), but what is really surprising is the big difference in the

wheelbase (22 cm plus more the Ford).

So we have two SUVs with a family vocation,

which can perfectly accommodate five people because, although three passengers in the second row travel a little tighter in width, the absence of a tunnel in the floor is very positive

(possible because there is no transmission or exhaust system components). The height is always very generous, even for people who measure 1.90 meters and behind, the seats placed in an amphitheater plan improve the views.

With the tape measure in hand, the Ford offers 2 cm more width at the front and rear, the height of the two is similar (although the test Mustang had a panoramic roof) and the Audi is 4 cm more than legroom behind (81 vs 77 cm) despite its shorter wheelbase and length.

Just as it surpasses it in the trunk (520 compared to 402 liters), although its rival makes up for it with a second hole under the front hood, 81 liters and with a great advantage. In the Audi you will have to remove the suitcases / bags to reach the recharging cables, but in the Mach-E it is enough to take them from the "frunk"

The trunks of both models have very usable geometric shapes, their capacity can be increased by lowering the rear seat backrests (60/40 in Ford and 40/20/40 in Audi) and they have a tray that can be mounted in two heights (the highest allows a completely flat cargo area to be created when the seat backs are down).

The Q4 e-tron takes advantage of the dashboard for better quality materials, a more confidence-inspiring mount and better integration of the horizontally mounted center screen.

At the Ford, it appears that someone has fixed a giant tablet in the center of the dashboard and exhausted the budget to make a slightly larger and more complete instrumentation.

The Q4 makes the driver feel more involved, with that screen focused on him, while in the Mustang it is more "social", positioned completely in an upright position, inviting the front passenger to touch it (being much more visible due to its dimensions: 15 inches against 10.25 "in the German car -

a larger, higher definition 11.8 "will be released in a few months, becoming the largest ever used in an Audi).

In the Q4, under that screen are the climate controls (Audi decided, well, to keep these physical controls) and below, between the two seats, a very open area, where we find the driving mode selector and the transmission (of a speed), plus audio volume and little else.

Also noteworthy is the new steering wheel (flat on top and bottom) and sensory buttons (instead of mechanical).

In the Mustang, behind the wheel we have a very narrow and (little) configurable digital instrumentation,

changing its appearance according to the chosen driving mode. There are three that have been given creative names: Whisper (Whisper), Active and Untamed (Indomitable) and they "play" with parameters such as the digital sound of the engines (amplified in Untamed and off in Whisper), throttle response, interior lighting, aids to driving and direction.

Two flaws in this regard: there is no "Individual" mode to configure different settings to suit each individual;

and it is not possible to visualize the amount of energy recovered when braking, nor

, unlike what happens in the Q4 e-tron.

By the way, the Q4 also stands out for being able to have a head-up display with augmented reality.

If there is something we can take for granted in electric cars, it is that they fire instantly at the slightest touch of the accelerator and these two SUVs of around 2.2 tons (and with a motor on each axis, ensuring 4x4 traction) are no exception.

The maximum speed in both is limited to 180 km / h, but the accelerations and recoveries are to stay glued to the seats: 6.7 seconds for the Audi and ... 5.1 for the Ford, already in the territory of pure sports cars.

The position and weight of the batteries contribute to improved dynamic stability, reducing the center of gravity, while helping to achieve a nearly even mass distribution. This is not to say that the weight is not felt in the curves, impairing a little agility, something that should improve with the suspension with continuously variable adjustment dampers (which the Mustang will only have in the imminent GT version). The suspensions, independent on all four wheels, are very competent to absorb irregularities.

They guarantee a very acceptable level of comfort, maintaining silence, which is important in 100% electric vehicles, where there is no sound from the engine to mask any other noise produced by the moving vehicle.

With lower ground clearance (14.5 cm versus 18 cm in the Audi), the Ford shows more stability when cornering (being wider and having heavier and larger batteries also helps), although the Audi does not sway too much in partly due to the contribution of the tires (235/50 R20 at the front and 255/45 R20 at the rear) compared to those of the Mustang (225/55 R19).

But there are differences.

Audi's steering is more precise and communicative (they make the same 2.6 turns from lock to lock), while Ford's feels more artificial even in Untamed mode.

Speaking of this issue, the driving programs are more marked in the Ford (but an indication in the instrumentation about the selected mode is missing), while in the German car it is even good that the mode we are in can be consulted. The unit used in this comparison was equipped with an extensive list of options (more than 10,000 euros of extras) but,

if we want to start erasing, the best thing is to give up the variable electronic dampers, because you hardly notice the difference even between the most distant modes.

Play with the back of the Mustang

In both cases, the delivery of torque varies according to the selected mode, and more is gradually sent to the rear wheels in the sportiest programs, with a torque vectoring effect, with selective interventions in braking that end up assisting the steering. and decrease the tendency to understeer.

The Mach-E can have a markedly sportier behavior when we select the Untamed program, which generates funny moments in which the rear "lets go",

if the driver provokes it (much more than in the Audi, where this behavior is much more content).

In the Ford there are three levels of energy recovery, the strongest of which allows driving only with the accelerator and that we almost forget about the brake pedal

The levels of retention intensity are defined through the central display (there could be a physical button ...), where the electronic simulation of the sound of a gasoline engine can also be adjusted.

three modes in the Audi

(one of them suitable for "one pedal drive"), in this case selectable from the paddles behind the steering wheel,

(e including an automatic level that changes the holding force according to traffic conditions).

The two top versions in each range

Here the two top versions (so far) of these SUVs with more power and, above all, more autonomy were compared.

Having a larger battery (88 vs 77 kWh), it is not surprising that the Mustang (which yields 351 hp) can do more kilometers per full charge: officially 540 km are promised (against 486 for the German model, with 299 CV)

but during our tests the verified distances were smaller, that is, 460 km for the Ford and 383 km for the Audi, but they already allow us to coexist with these two models without strong anxiety generated by the danger of running out of power in the middle. From the trip.

Of course, one can stop along the way to charge, with the Mustang's further advantage in this domain, by allowing

(there are not many ultra-fast charging stations in Spain, but this will inevitably happen in the future). In alternating current (AC) the maximum is the same for both models (11 kW). In DC, with the respective maximum currents, in 10 minutes the Audi can receive power for 130 km and the Ford for 119 km and in AC, at 11 kW, it will take more than 7 hours in any case (about an hour more for the Ford).

The entry price of the

Audi Q4 e-tron 50 quattro (58,160 euros) is lower than that of the Ford Mustang Mach-E AWD Extended Range (64,963) but they are much more level in these "stuffed" versions and when we balance the contents

s as much as possible (the Mustang has almost everything as standard, including equipment that is paid extra in the Audi like the dynamic assistant of cruise control, the driving modes, the power front seats, the leather upholstery, the alarm, more speakers , etc).

What are the main strengths of each one?

On the Ford side, more sporty behavior, superior range and faster loads, faster performance, in addition to a more "marked" aesthetic.

Audi responds with a more technologically advanced interior, complete and well-built, as well as being a bit more spacious.

MotorArcfox Alpha T, the Chinese luxury that points to Europe

Lynk & Co: the formula for fewer cars on the streets and more used